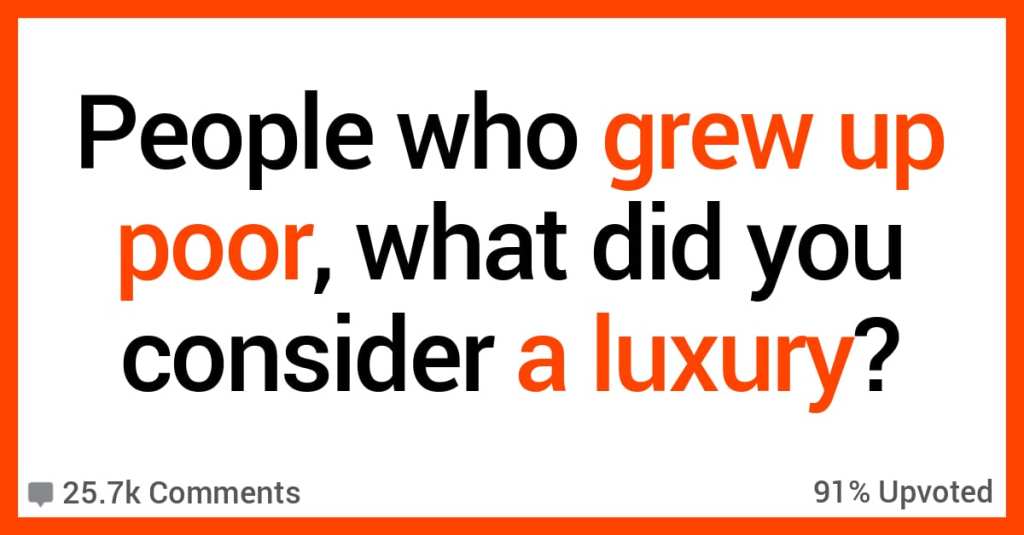 But if you truly grew up in poverty, your whole perspective is different about how you view the world.

And those kinds of things stay with you forever.

AskReddit users who grew up poor talk about what they considered to be luxuries.

Cold showers were always available, but when you scraped enough cash to get some diesel fuel and get the burner to kick on long enough to have a hot shower man, absolutely nothing better.”

I grew up pretty poor (no TV, no toys, but had a Sears catalog). My dad got in a serious accident when I was in 4th grade and almost lost his life. He won a small settlement from the community college he was working at and I was able to buy new clothes for the first time in my life.

Before this all I ever had were hand me downs from my cousin and donation clothes from the church. Most were worn to the point of having patches on the knees.

The worst part about getting new clothes for the first time is I felt terrible the whole time picking out new clothes because I always felt like a financial burden to my parents. I remember going to Miller’s Outpost and picking out typical 80’s clothes (OP, TnC, etc.).

It’s funny how growing up poor affects my everyday choices, for better or worse. I’ll never outgrow some of the feelings I had as a poor kid and I feel for any kid who has to endure a childhood of poverty.

It will affect them and their choices for the rest of their life.”

“Honestly, I didn’t know that Pasta Roni was $1 until I was a grown man. I thought that was some gourmet sh*t.”

It’s gotten to the point where I can’t eat in the morning because my body is so used to waiting.”

“Going to the movie theater!

I saw a grand total of, like, three movies at the theater when I was in high school. My classmates would be discussing movies that had just come out and I never knew what to contribute to the conversation because I had not seen them yet.

Finally started seeing movies at the theater when I started earning my own money.

It also wasn’t very common for high schoolers to hold part time jobs, although I’m not sure now?”

“I don’t know if anyone can relate, but in about 3rd maybe 4th grade, me and my twin brother had a music class where we were both required to buy a recorder, like a plastic flute thing.

Well my mom said we didn’t have the money so my twin brother and I tore the whole house up in search of $6 for two recorders. We brought a ziploc bag full of change pennies, nickels, dimes etc.

I think the teacher felt sorry for us, cause she paid for our recorders when the rest of the students left the room. Gave us the ziploc bag back.

“Brand name cereal was for the upper class, man.

Every time I saw Reeses Puffs on top of the fridge, I knew tomorrow was gonna be a good day.”

“Grew up pretty poor in Arkansas in a trailer.

I literally got a door to my bedroom for Christmas one year.

It probably still was the best gift I ever received.”

“In middle school I was on reduced school meals so it would be .40 for lunch.

So my parents would always give me 2 quarters every morning for lunch, now the cafeteria would also sell cookies which wasn’t part of the lunch set for .50 each.

So saving .10 each day I could afford one cookie by Fridays lunch. Good times.”

I don’t remember having a new winter coat until I was probably 14 or 15, they had always been hand-me-downs from my cousins.

They were usually at least ten years old by the time I got them and the stuffing would be all clumped up.”

“School parties where everyone brought something to share for lunch.

“If you don’t bring something, you don’t get to participate…”

I brought two carrots after not being able to afford school lunch for two years. Even the teacher laughed at me.

My young self just decided that day that some people don’t deserve lunch.”

“Staying at someone’s house who wasn’t poor, like a relative or friend.

Their house was also so clean, beautiful, pictures on the wall, knick knacks on the counter, and carpet you could play on because it was clean.

I spent my entire teenage years hiding where I lived.”

Did you grow up poor?

Whatever the case, we want to hear from you.

In the comments, tell us what you considered a luxury when you were growing up.