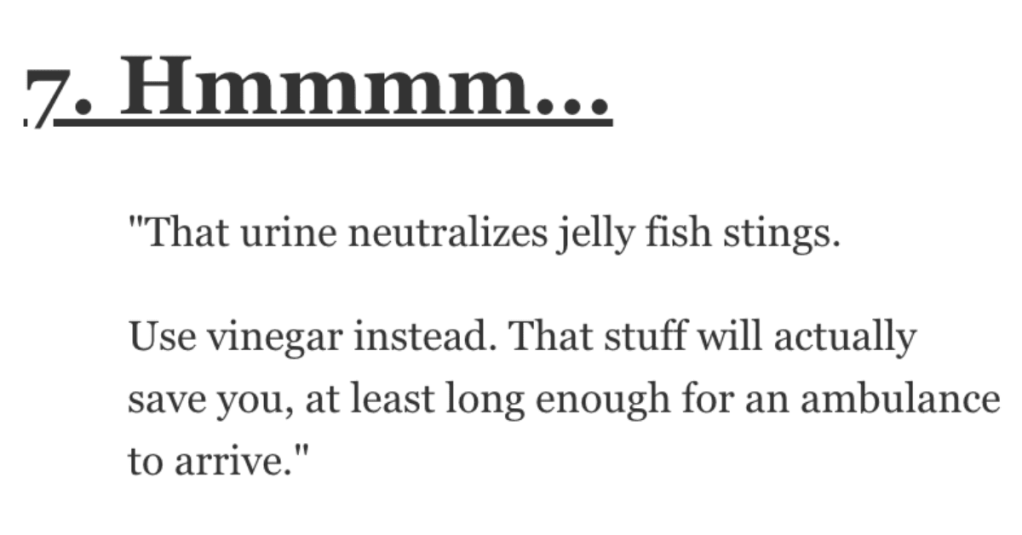 What Myth Is Still Widely Circulated as Truth? Here’s What People Had to Say.

Have you ever tried to have a debate (or even a polite conversation) with someone who just can’t be reached because they won’t listen to reason about a certain topic?

That can be frustrating. And it can be REALLY frustrating when that belief isn’t true and has been disproven over and over again.

But that’s the kind of world we live in because people are stubborn and they don’t like to accept new ideas…or facts.

Here are some myths that AskReddit users think are still widely circulated as truth. Let’s take a look.

1. Be careful out there.

They do, because there are 140 different strains of the HIV/AIDS virus, and getting infected with another strain, especially a potentially-deadlier one, could be dangerous.

Also, pregnancy is still a very big risk for HIV positive women. If you are considering a s*xual relationship, get tested, and talk to your doctor about birth control.”

“That people in general though the world was flat until Columbus sailed the ocean blue.

No, the Ancient World figured that out a long time before.

People just thought that it wasn’t possible to sail across the ocean to Asia because sailors would run out of food by then, while Columbus thought that wasn’t case because he thought Asia was bigger than contemporary estimates.”

3. What does that logo mean?

“The white on blue roundel in the BMW logo represents the white blades of a propeller against the blue sky, alluding to BMW’s history as a manufacturer of aircraft engines.

This myth was popularized in BMW’s advertising for aircraft engines. (And perpetuated by the movie Finding Forrester.)

In truth, the blue and white come from the Bavarian flag, presented as a circular coat of arms in reverse order to avoid a trademark law prohibiting the use of symbols of state sovereignty in a commercial trademark.

It was only in later marketing for aircraft engines they overlaid the logo over spinning propellers, as coincidentally it could be taken to look like a propeller against the sky. They made all sorts of engines for land vehicles as well.”

“That one I’ve heard repeatedly is “shaving makes your hair grow back thicker.”

I have had lengthy arguments with more than one person about this.”

“That the US spent over a million dollars and two years to develop a pen that could work in space…whereas the Soviets decided to just use a pencil.

In the early days, both used pencils, but since pencils are made out of graphite, and graphite is conductive, snapped graphite particles are dangerous in a pressurized space capsule….to put it lightly.

Fisher, the owner of the pen company, spent his own money to develop a pressurized ball point pen. And cost only about $3.00 per pen.”

“The Myth: You can tell if a snake is venomous or not by the shape of its pupil (slit for venomous, round for nonvenomous).

The Advice: If you cannot, from a safe distance, immediately identify a snake beyond a reasonable doubt, assume it’s dangerous and behave accordingly; keep your distance, stay out of its direct path, and keep your eyes on it until one or the other of you leaves the area.”

That stuff will actually save you, at least long enough for an ambulance to arrive.”

“That Marylin Manson removed 2 of his ribs to blow himself.

I will never understand how this one traveled around the world before widespread use of the Internet for stuff like this. Some of the other ones, sure, they were stuff that sounded medical or scientific were circulated by papers or magazines.

But this one somehow circulated in places that may have never even known who Marilyn Manson was.”

“That goldfish have a 6 second memory.

I mean it’s still not great, I think like a couple months. But still….

Get your fish a bigger d*mn tank”

“Undercover police have to tell you they are policemen when you ask them.”

“Catherine the Great died after attempting to have s*x with a horse.

This myth was started by the French.

And then they ask why everyone believes Napoleon was a tiny, tiny man.”

I legit read something that said “Normal people use only 8% of their brains; Einstein was able to achieve what he did because he used 11%. Imagine if we unlocked all of our brain.”

It’s scary how misinformation can be so prevalent.”

“Something about touching baby birds and their parents abandoning them due to the smell of human touch.”

“That Mr. Rogers was a sniper and/or had tattoos covering his arms.

In the comments, tell us what myths you think people out there still think are true.