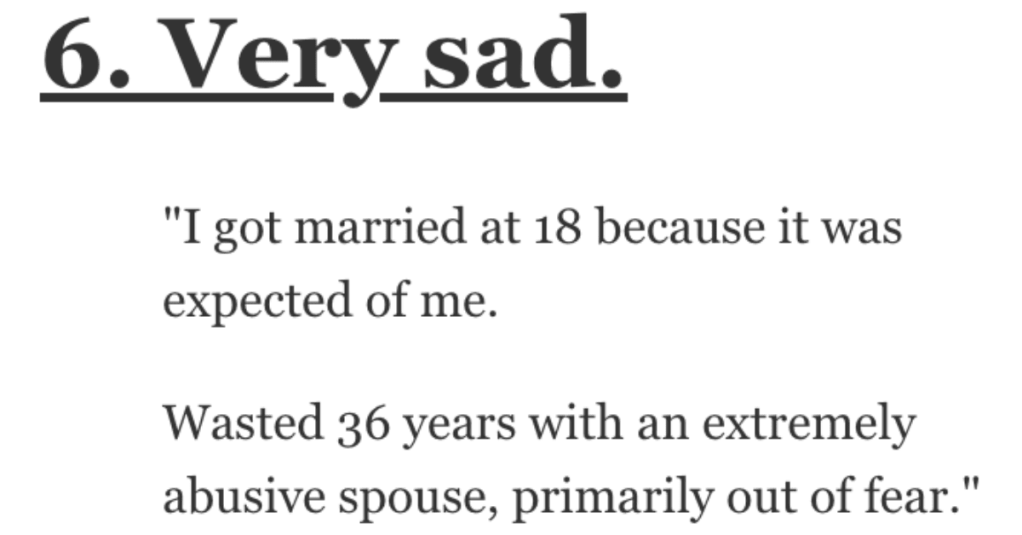 Do you know anyone who really and truly thinks that they threw their life away and that it’s beyond repair?

It’s a sad fact of life but it’s also a true fact that it does happen to quite a few people out there.

If you think you threw your life away, where do you believe it went wrong?

1. Thought it was normal.

“Started working at a restaurant at 14 surrounded by drugs and alcohol.

I thought is was completely normal behavior for adults and chefs I looked up to until I was 37 and realized I have a huge alcohol problem and lost everything I own.

“I had my own landscape company i employed 5 others but I had a addiction problem with cocaine. At the the time I didn’t know I had severe mental health problems.

I have BPD DPD and bipolar disorder 1 with psychosis. I woke up one day and couldn’t do it anymore. I left the company to the lads I worked with. Since then I haven’t worked in years I’ve lost count how many times I’ve been hospitalised. I tried to end my life but ended up in a coma.

I’m doing better now despite going through a divorce I’m on antipsychotic meds and I’m doing good now but could never go back to work.”

“I got lazy with education from a very young age, and in the end my brain just lacked the ability to apply to anything that required real effort.

Then I stopped caring, just got a decent enough job and that was it. This is life now.”

“I coasted through high school, made good grades but did not do well on the SAT.

Had to take something like “remedial math” my first semester of college because my SAT math section score was below their standard but my overall score was in their acceptance range (which is very low). College kicked my *ss the whole way through.

I made it out with a GPA that is so embarrassing I never put it on a single resume and never gave it out. I’ve been from laughable job to laughable job but managing to scrape by.

I would love to have a higher level of education to achieve a better career, but after years of being in the workforce I don’t think I could actually do it. It’s like my level of brain power has dropped off significantly to even worse levels than before.

No way I could earn a masters degree. I feel like I wasted my life by not taking school seriously in high school. I could have gone to a much better university and gotten a better degree and better GPA and not have to take these soul crushing jobs.”

“I was in a car accident when I was 15. Had what they called a “closed head injury”.

I dropped out of school twice, however I did end up graduating, like barely. Stared smoking weed, then cocaine, became an alcoholic, started smoking meth, f*cked off good jobs, shoplifting, and the list could go on. I’m 41 now, and became a mom 3.5 years ago and have completely turned my life around, as far as drugs and drinking, but I still suffer with depression and anxiety.

I believe my brain injury had a lot to do with my crazy behavior, and still effects my mental health.”

“I got married at 18 because it was expected of me.

Wasted 36 years with an extremely abusive spouse, primarily out of fear.

“So I’m a third year medical student and going to medical school is my biggest regret.

I should have chosen the career path I initially wanted but I let people tell me where to go.

Problem is I’m gonna be in too much debt to do anything else.”

“I got really depressed when I was in my early 20s so I f*cked everything up and isolated myself for a few years.

Despite a good degree that kind of killed it for me.”

Was more or less pushed by various environmental factors into a direction, without really thinking about who I was or who I wanted to be. I just followed societal/parental expectations and sure enough ended up in a career I care little about, and feel like a zombie on a daily basis, like dying.

What sucks is that before 18, I never had a bad time. I cared for school, I always tried to do my best. But after 18 everything went too quick, I had to pick a career, etc.

Now at 30+, I feel nothing for my life & career, but I’m also in the paradox that I don’t want to start all over again to go for a career that really interests me, because going through college/university all over again just feels too much of a battle (going from working professional with money to unemployed year 1 student).

I just feel that just a small window of a couple years (18-25) decided my entire life for me and ruined it forever.

My only advice for people is to gain some maturity, ask themselves what they truly want to be, and only then embark on studies. You need intention in life. Parental expectations or being a good boy trying to do his best isn’t enough.”

I listened to people who I respected while growing up and ended up in an objectively great position in life. Even my parents’ peers/friends say they wish their children were in my position.

And yet, the days gloss by. I feel like a zombie. I feel like I made a mistake between 18-25, but don’t know what it is. I want to restart, but now I have obligations with family planning and a mortgage.

I love my spouse, but I could take so many more risks if I were single. Going with the flow is not the way.”

“I focused too much on the long term.

Then I woke up at 40 in the middle of a pandemic all alone and realized I have nothing that is worthwhile.”

Do you feel this way?