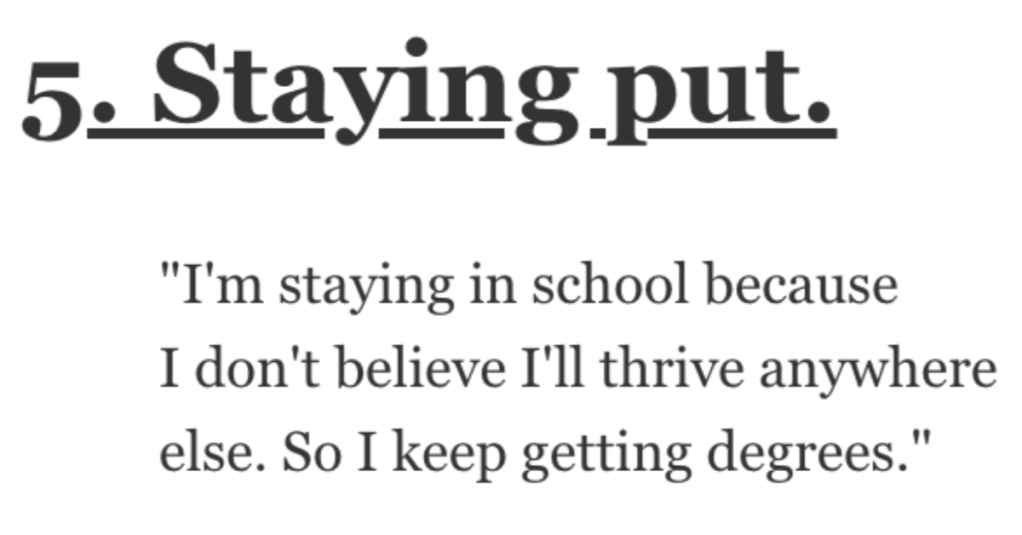 People Who Were Considered “Gifted” in School, What Are You Doing Now? Here’s What Folks Said.

I definitely was NOT considered gifted in school…

Not that I’m dumb or anything like that, but there were some subjects that I was just never going to have a great grasp on (I’m looking at you, Math and Science).

But the folks were about to hear from on AskReddit were gifted…let’s find out what they’re doing with their lives now.

“I design touch screen remote controls (and the software that runs on them) for a living.

“Did amazing through high school, the moment I got into college (away from my helicopter parents, and having a lot less structure), everything fell apart and I fell into horrible depression and flunked out immediately.

Took about a decade to break free (thanks therapy!). Got a job as a part-time cart pusher/bagger, worked my ass off and eventually landed an office job.

I don’t make as much as I would have if I had stuck through college, but it’s a stable gig and I’m much happier than I would have been.”

Discovered I had a knack for programming my sophomore year in college many moons ago.

Made a career out of it.”

“I’m a computer engineer and VP at my company.

I worked at a successful startup and even had a co-op job at NASA in college.”

“I’m staying in school because I don’t believe I’ll thrive anywhere else.

So I keep getting degrees.”

“I’ve got a good life. Got a master’s degree and certification in a job that I find really rewarding and challenging.

I still love to learn.

I have a great relationship with my SO and a pretty cool kid.

I’m still friends with some of my gifted buddies (despite living all over the US). And I would say we are pretty content with our lives.”

Went to undergrad for engineering and then got an MBA and several certifications. After working for a few engineering suppliers, I’m now a consultant in a very specialized market.

Things are great and I’m extremely thankful for the opportunities that I’ve had.”

8. At least you’re having fun.

“Working late nights in bars, drinking and partying way too much.

“I maintained high academic achievement. Went to a top 10 college, currently in medical school and looking at Vascular or Neurosurgery residency in the future

A perfect ACT and 100th percentile MCAT got me to where I am but I’ve had to grow a lot in the past couple years.

Intelligence has taken me as far along this path as it can, now it is just work ethic above all else which took a lot of adjusting.”

“I own my own business.

Being “gifted” was kind of a roadblock though and it should be done away with generally.

Instead of understand that I have an easier time figuring things out, I rather often thought that the things which weren’t easy were just generally impossible and didn’t even try to do them.”

“Well I got diagnosed with ADHD last week, which feels like a “better late than never” sort of thing.

I’m 31. Gotta love the “gifted oldest daughter” to “bisexual neurodivergent with depression, anxiety, and an immense need for the approval of others” pipeline.

“I got a degree in music, moved to Germany, worked as a teacher, studied some more, opened a business, recorded an album, almost finished with a 2nd degree.

However, I’m not a professor or millionaire. All people in the gifted program in my school have led ordinary lives.”

Were you gifted in school?

If so, tell us what you’re up to now.