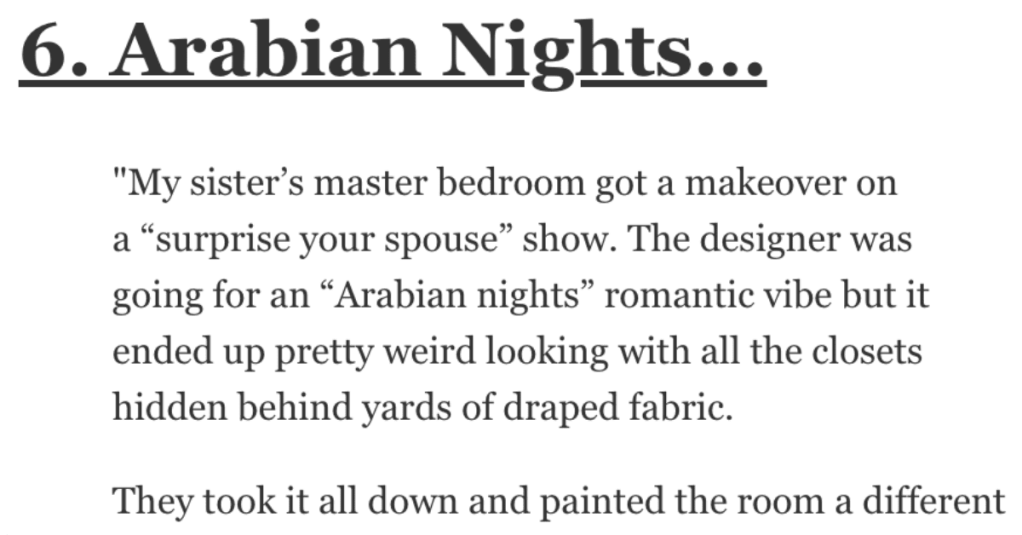 I have a friend who was on the TV show Monster House back in the early 2000s.

Do you remember that show?

A bunch of workers would descend on a house, rip it apart, and re-do the whole thing in a few days, and the house always had some kind of a cool theme.

My friend lived in Los Angeles at the time and I remember her giving me the inside scoop about what went on behind-the-scenes. She and her family ended up selling the house shortly after because they were going to be moving anyway, but she said the whole experience was a lot of fun.

Do you know anyone who’s ever been on a show like that?

AskReddit users who were on home renovation shows shared their stories. Let’s take a look at what they had to say.

“My family was on a home renovation show when I was a kid, in the late 90s early 2000s. I think it was Changing Rooms or possibly another show by the same cast and producers.

It was one of those shows where they do 3 rooms in the house and mine was one of the rooms they decorated. It looked so pretty, they decorated it to look like a fairy woodland with huge tree murals on the walls and a nights sky of stars hanging from the ceiling.

But it held up really badly, all the murals on the wall peeled off and it looked bad pretty quickly. I had fun shooting the show though and it was a cool story to tell my friends at school.”

“My parents (and me, as a baby) were on a home renovation show called Makeover Wish. You would send in a heartfelt story and they would choose you and come renovate your house for you and leave it a complete surprise for you.

About 6 or 7 years before I was born (I’m 15 now), one of my mother’s kidneys were failing. She was in the hospital constantly got extremely sick, and lost vision in both her eyes. My dad, being the hero he is, decided to donate one of his kidneys. Although it’s not too rare for people to donate kidneys nowadays, back then this was a huge deal and there’s been several news paper articles and news broadcasts about their story.

My parents ended up winning the Makeover Wish renovation for our house. The episode is actually on YouTube. Search “Makeover Wish: The Donor” (I have a cameo in it). Apart from the master bedroom, everything is pretty much the same and we’ve lived here ever since, and I hope to for years to come.”

“My friend was on Love It Or List It. She said that they did great quality work at a fraction of what it would have normally cost (the home owners in this show have to pay for the renovations).

She did say that her family were told to be all dramatic and have little arguments about the renovations to add spice to the show.”

“I was on Listed Sisters on HGTV about 3 years ago on Season 2. It’s been great. The quality of work held up and it is still pretty stylish.

I moved so I Airbnb the house now and the HGTV aspect seems to sell it well. Nothing bad to say at all. HGTV chipped in for some repairs as well since my ceiling fell in during the renovation.

“It’s not a house, but a local place was on Bar Rescue a few years back.

Overhauled the entire interior. I haven’t seen the episode of the actual show but the bar has softball fields at it. I went up and played softball during one their test runs. They renamed the place Boulder Lodge.

About 9 months later they went back to the old name but kept most of the interior designs and food/menu. It’s still running and largely seems better than it was before the rescue.”

“My sister’s master bedroom got a makeover on a “surprise your spouse” show.

The designer was going for an “Arabian nights” romantic vibe but it ended up pretty weird looking with all the closets hidden behind yards of draped fabric.

They took it all down and painted the room a different color within months. They also took the ceiling fan out and replaced it with a giant tree branch wired up with twinkling lights.

Not too long afterwards half the lights went out and it was too hot in the room without the fan, so that got put back as well.

On the bright side it didn’t cost them anything and was a fun experience, and they got a couple of new furniture pieces out of it but in the end they didn’t keep any of it the same.”

“My sister had her bathroom remodeled for a show. They took two back to back ancient 1970s styled bathrooms and made one giant bathroom with a walk in, no door shower and a bathtub that fills from a faucet in the ceiling and marble sinks.

They paid for all the materials while the show paid for the design and labor. Still the show said “you have to buy these two sinks. Uh, they are $1,500 each. …. “yes buy them”.

She did further renovations later, but rents that house out now because they bought a new place. I think the bathroom certainly brought a wow factor from the renters.

If it were me, having two back to back bathrooms with updated fixtures and paint would be worth a lot more than one giant bathroom with separate walk in shower, huge 50 gallon tub and a single toilet (and two marble sinks) because practically speaking only one person can use that at a time and it feels like you’re p*oping in a living room or something, it’s so big.

In any case, I think the renovation certainly added appeal and value to the house for sure.”

“Was on a show called the Builders on the BBC in the mid nineties. They were building an extension on the back of our house but left for two weeks unexpectedly half way through construction.

We couldn’t get in touch with the builders and the production crew were very cagey when we asked whether they knew where they were. Found out a few months later when the show aired that they had all buggered off to Tenerife together for a holiday without telling us.

We hadn’t finished paying them by that point because they still had a few tiny bits and pieces to finish, the sort of things we could do ourselves if needs be but which they’d agreed to complete before we payed them the final payment.

Long story short, we complained and told them not to come back and ended up getting a 1/3rd off the price we’d expected to pay for the extension.”

“I knew a guy who was part of one of these shows back when we were in middle school together.

His family was extremely white trash and drug addict types, but they got all cleaned up for the show.

Within the first year after the makeover, the house was a pit again.”

“A family member of mine was on a DIY show called Turf Wars. They basically come in and remodel your and a neighbors backyard and then have a “vote” to see who wins the remodel.

The show itself was pretty clear cut, they would come in and give a bunch of orders, take some “candid” shots of work being done and then hang around letting the owner and contracting crew do the work. The hosts were pretty friendly but just kind of gave orders. The voting thing was kind of a joke.

They had people from the neighborhood come and check out the backyards at different times and one of the yards was inspected in perfect conditions to let the decor shine with the other was just quickly given a walkthrough. Both of the yards honestly looked great but the winning house (neighbor, not family member) had been in the neighborhood for a few years while my family had recently moved in so weren’t well known.

The problem was the neighbor had a really large centerpiece to their backyard remodel that was a little impractical for the smallish backyard they had, and there was hardly any covered sitting areas so if the weather wasn’t great (and it’s not that great haha) it wasn’t a comfortable area to sit around and either get baked by the sun or rained on.

Less than a year later the centerpiece was removed and the pond cemented over as it was too much upkeep and their backyard fell back to just a cement block, while my family still had the whole backyard setup there as it was much more practical.

They kept it until they moved out about 3-4 years later, not sure if still around but would be surprised if it was removed at all.”

“I work for one of the construction companies that was contracted to build the new house on “Extreme Makeover: Home Edition”.

This was like 10+ years ago when the show was at the height of its popularity. Anyways, it was a huge nice house built for a widowed mother with several kids (father had recently died, hence why she was on the show…).

Edit: the obvious follow up question here (I get it all the time…) is what are the legalities of selling that house, especially that quickly? Does she get to keep the $$ from the sale? My answer is: I have no idea.

Another popular question: Did your company have to donate anything to be on the show?? Yes, but I have no idea what was donated. I have heard rumors that labor was donated and the show paid for the materials, but I have no real confirmation of this.”

“Friends were on a show a few years ago. It was super intense 3 weeks of filming and the redesign looked great on camera.

In reality it was literally things stuck together with staples and tape. After the show my friend took 2 weeks off work to rebuild everything properly.”

“Plumbing and remodeling company I work for did plumbing for an HGTV show about 10 years ago.

We did the hook ups for the new laundry room. The homeowners picked some fancy Moroccan tile for the floors at some upscale NYC boutique and the host of the show decided it would look better without grout…which went about as well as you’d expect.

Filming wrapped, and we were called back out a few weeks later to replace the fancy tile that immediately chipped and became dangerous with some boring tile.

Have you ever been on a show like this? Or know someone who has?