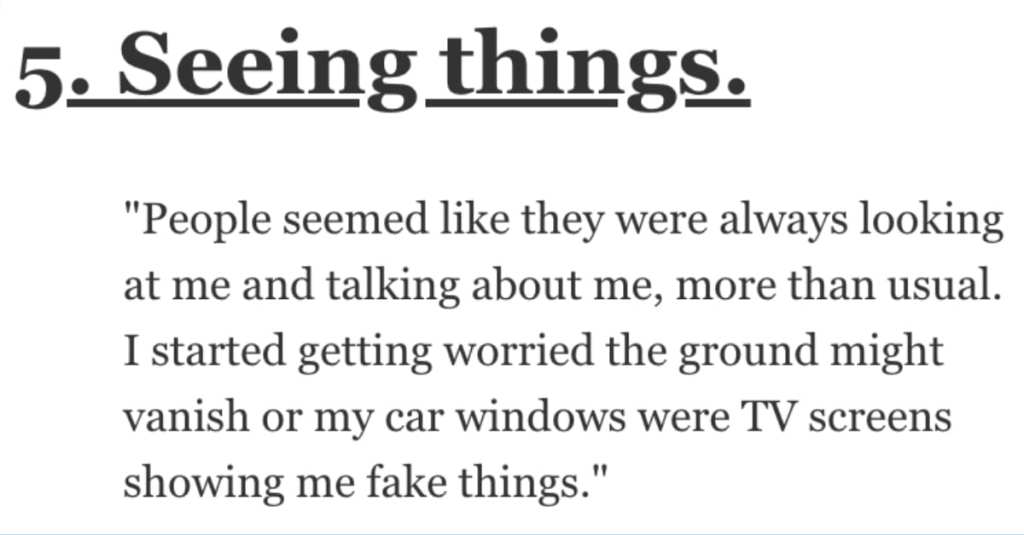 People With Schizophrenia, How Did It Start For You? Here’s How Folks Responded.

I can’t imagine what people go through who have schizophrenia.

It must be a confusing and terrifying existence where you don’t know what is real and what is your imagination.

I truly feel bad for the people who have to deal with it.

So how does it start for people who suffer from schizophrenia?

People on AskReddit shared their stories.

“Before I was aware it was a thing, I woke up to lights being on that I swore I turned off, hearing things in the house.

I started to think my house was haunted (which was stupid considering I have a family history. My house was not haunted, my brain is).

My first legitimate psychotic break I was mountain climbing. Saw a child on the summit and freaked out that he was going to fall. My friend just stared at me- there wasn’t anyone there.”

“I would hear a loud party in the kitchen, as a kid, when everyone was sleeping.

It creeped me out at first but eventually I could choose what music they played and I stopped being scared.”

“I had the feeling people were watching me, but would stop as soon as I started to watch them back.

Then it began to feel like I was judged on everything I was doing, on how I was performing in life. At this time I was 13. It ramped up slowly until I reached 16.

You know that feeling when you’re talking to yourself but you slowly realized it is not “you” that you can hear in your mind? I had that 3 days before Christmas when I got 16 years old. But I didn’t want to tell my parents, it’s Christmas, not exactly the best time to declare “Yo! I am bats**t crazy” when you have family over. And let me tell you my “voice” was super convincing to keep that for myself.

Luckily for me, my Aunt could not make it to my parent’s house because she believed the FBI was looking for her. My Uncle brought her to a psychiatrist, who declare she had schizophrenia. The it became clear to me that I was going through the same thing as her, so I told my parents.

Then I got my diagnosis. That was the worst Christmas I have ever had…”

“When I got married and suddenly moved across the country with my husband to college was my first psychotic break.

Two voices started talking to me regularly after that, and I realized that one of them had been there since high school, I just assumed everyone had an outsider voice talking to them too.”

“People seemed like they were always looking at me and talking about me, more than usual.

I started getting worried the ground might vanish or my car windows were TV screens showing me fake things.

Saw little light pixie lights floating around by the time I got into the psych ward.”

There was a party at my house and I thought everyone was plotting to k**l me (they weren’t) so I went to the kitchen and cut my throat with a knife.

I figured if I was gonna die, I’d go out on my own terms. I’ve been having psychotic delusions ever since.”

” It started for me when I was in middle school. I started feeling like I could feel other people’s emotions and read their thoughts.

Then I started feeling like they could read my thoughts. I began to hear music all the time, at different volumes: sometimes quiet, sometimes deafeningly loud, coming from outside, or the apartment next door. Throughout my life I would have episodes where I would talk to/communicate with plants, or believe government organizations were out to get me. Sometimes I would have instances of disorganized speech/thought.

A few years ago it started to get worse: my hallucinations and delusions started to become more frequent, and bizarre. At that time I also started to have problems with negative symptoms. I stopped being able to concentrate on anything, or motivate myself to do much of anything. I used to be a big reader, reading a dozen books a week, and now I can barely read 10 pages at a time.

Hell, I can’t choose between shows to watch on Netflix, or channels to watch on youtube, I just don’t have it in me to care about it. But I’m still able to hold down a basic, which makes me a minority among people with schizophrenia.”

“I guess the first thoughts I started to have that were intrusive began when I was 14-15. I consistently thought the people around me wanted to k**l me or harm me in some way. Didn’t matter who it was.

I started to believe that I could read people minds and their intentions. I thought that my mother and father and everyone I thought was close would talk behind their backs and come to conclusions that I was someone they had to eliminate. It spun pretty deep from here. By the time I turned 20ish the thoughts became voices other than my own.

I started to manifest “outside influence” within my mind. I believed that I could speak to god and he would speak back. We would have conversations. Lots of stuff just kept coming up. I didn’t tell anyone, and made it worse when I did.

I told my mother about this when I was about 22, and for a year or so she constantly would make comments that she was afraid I would m**der her, and told multiple people about my condition without my permission and would say things like she needs to lock her door at night now, and she can’t leave her room at night because she thinks I’ll come m**der her.

So I guess you can decide where it came from.”

“For several years I had like this third person kind of voice that I didn’t feel like I heard it but it was just in my brain.

It was said the same thing “(my name) k**led himself.” It was always like people matter of factly telling others I committed suicide.

It started after I got PTSD at work. Still happens but not as often. Not sure what to think of it.”

“The major symptoms didn’t really manifest as something I noticed.

I got mixed up in weird internet communities and ended up believing myself to be in a relationship with a fictional woman. It was so serious that I could actually hear her talking to me at times.

But when I realized there was a problem, it started with little tiny things. Out the corner of my eye, I’d see insects on the walls, or my phone’s notification light flashing, or the shadow of someone standing behind me. (At my office job, people liked to stand behind me and wait until I noticed them to actually talk to me.)

Then it grew — occasionally, I’d see a shadow person walking under some street lamps, but they’d be gone when I looked again. Or I’d use my phone’s GPS to go somewhere, and I could faintly hear it blabbering random syllables between instructions. What really frightened me was when I saw a little dancing dot in the center of my vision; it was the most direct, obvious sign my mind was failing.

I went to the walk-in for an unrelated issue and brought up my hallucinations at the end of the trip, and the doctor told me that he’d get an ambulance for me if I didn’t drive myself to the nearest emergency room.

They put me in a little mental health assessment wing, where I thought there were cameras in the walls. There was a really noisy fan in the bathroom that turned on with the lights, and I could swear I heard the nurse babbling to the security guard while I was in there. It didn’t make any sense, just like the GPS, but it was about me. I knew I had to get out of there.

Despite the delays from bigger hospitals, I was able to see a private psychiatrist who put me on medication. My issues stopped almost completely, with few side effects, once we found the right medication.

I still see the occasional bug or something like that, but it’s under much greater control now.”

Do you know anyone who suffers from schizophrenia?

If so, please tell us about how it started for them.

Talk to us in the comments. Thanks.