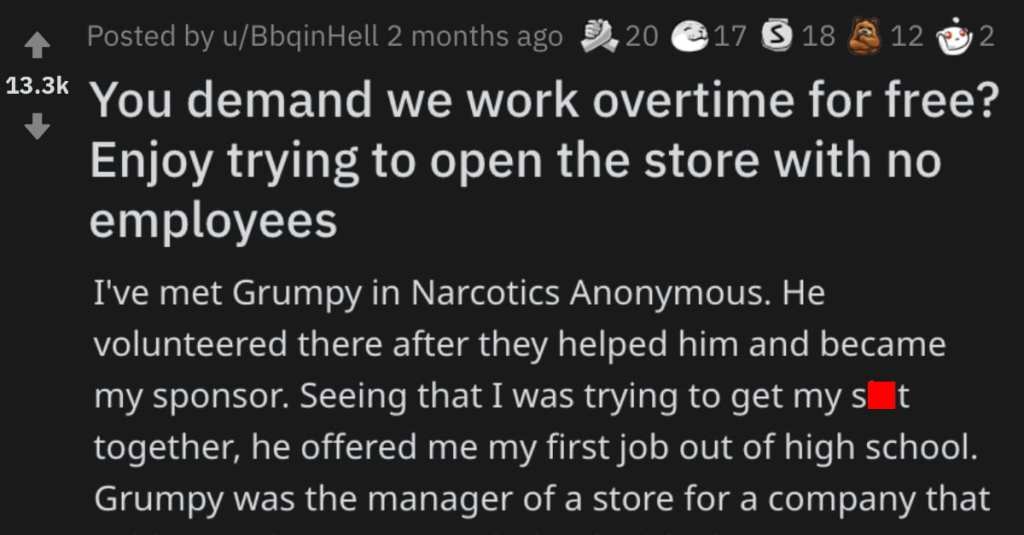 You want me to do what?

In case you haven’t been paying attention, some employers out there like to do everything they can to take advantage of their workers.

And that includes asking them to work overtime for no pay.

Let’s see what happened in this story from Reddit.

You demand we work overtime for free? Enjoy trying to open the store with no employees.

“I’ve met Grumpy in Narcotics Anonymous. He volunteered there after they helped him and became my sponsor.

Seeing that I was trying to get my s**t together, he offered me my first job out of high school. Grumpy was the manager of a store for a company that sold everything you needed to build a house. From cement and bricks, to custom made cupboards. I started as a “loader”, filling the trucks that were making deliveries.

A little background for the company (it plays an important for later). When they started, back in the early 1980s, they sold everything you needed to build a brick and mortar home wholesale to professionals.

During their first expansion, they got a really good reputation for their prices of power tools, custom cupboards and landscaping (including custom made garden furnitures). The stores were basically big warehouses. In mid ’90s, they opened their doors to the general public, which accompanied by a rising tent of DIY, skyrocketed their sales.

That brought a second, smaller wave of expansion and the opening of the online store (first only with phone orders and later with a proper site). When I joined, they were doing a third shift on their business plan.

They had cut down on things that weren’t a big seller (like bricks and concrete) and were focusing more on the big sellers (custom made furniture, landscaping, tools and, for some weird reason, plumbing).

My first 8 months on the job was a dream. Grumpy was an excellent manager. Having started in the company roughly the same age I was and being promoted through the ranks, had developed a very distinct managerial style. His concept was simple: “if my employees are happy, they work better and provide better services, which leads to better sales”.

That meant that while Grumpy managed one of the inner city stores, meaning medium to small size compared to others, we were fourth in revenue nationwide and first in customer happiness.

And then the reason for his nickname stroke. While everyone called him Grumpy (a nickname he was kind of proud of), he was far from it. The reason was he had a medical condition that affected his nerves and had left him with a permanent frown on his face.

He had declined promotion due to that condition (knowing the extra stress would make his condition flair up, meaning he wouldn’t be as effective as he would like). His medical condition flaired up unexpectedly and Grumpy had to be hospitalized and be on sick leave for a time. HQ decided to not have one of Grumpy’s assistants be an Acting Manager for the duration, but bring in a regional manager to take over the store for the duration. Let’s call him Wilhelm.

Wilhelm was the exact opposite of Grumpy. He was younger than Grumpy (he was in his late 20s, Grumpy was in his late 30s), had a business degree and he hadn’t worked the floor at all.

He was hired from the beginning as an office drone and climbed his way to regional manager. The reason he was put in charge of our store had to do with the change of the business plan of the company.

You see, the change of focus had created a lot of empty space in the stores. A supermarket chain had approached the company with an offer to rent the empty space, especially for inner city stores.

The company had accepted and placed regional managers in key stores to help with integration. The thing is, the supermarket chain had a reputation of being bad employers. That was reinforced by one of our tellers, who had worked for them for three years before quitting to join us.

Wilhelm didn’t help also. His managerial style was based in only one concept: make more money in any way possible. He started by changing our schedule from monthly to weekly, raising the sales targets to unrealistic heights and always demanded more. In the first two weeks, six experienced people had left (four quitted and two fired) and replaced by young, inexperienced people that were easier to manipulate.

And then, the integration happened. The floor was the first to feel the problem. The supermarket opened its doors and was understaffed. Wilhelm started sending people over to “help” for four to six hours, while also demanding to work their regular shifts. If someone declined, he/she was written up. Two write ups in six months and you were fired.

Then Wilhelm came to “lay the law” in the loading bay. The loading bay was shared between the two stores. Wilhelm declared that we had first help the two guys of the supermarket unload their trucks first, because their products were “perishable”, and then started loading our own trucks.

That would throw our delivery schedule to the wind. The loading crew worked 05:00 to 13:00. We loaded first the trucks that had longer to travel, so they will be ready to leave at 07:00 at the latest (the company had a next day delivery policy for a 150 miles radius).

What Wilhelm declared meant we couldn’t start loading our trucks before 07:30 and they couldn’t start their route before 09:30. We said as much, but Wilhelm didn’t care. He said we had to do both jobs. When someone inquired about overtime, Wilhelm said no. He said we already made too much money with unsocial hours (05:00 to 08:00) and leaving “early”, so he wouldn’t approve overtime.

So, from a nice environment that you wanted to work for, we all started getting miserable. We lost ten people in the loading crew in a month because of the new rules. The new hires didn’t last long.

The floor was a mess also, started turning personnel faster than a dollar hooker. Anyone who is staying is either looking for another job, is afraid of unemployment or is too young to know better. The sales had a very small decline, but customer happiness is plummeting fast.

After almost six months, all the “Old Guard” that was left, was ready to quit. But our “savior” came back. Almost six months from the day he was hospitalized, Grumpy walks in the store to claim his rightful position.

He isn’t a knight in shining armor, riding a pure white horse, carrying a legendary sword. He is in a normal attire, slightly limping and holding a cane. We have a “welcome back” party and have a small glimmer of hope now he is back. We are informed that Grumpy will be on light duties for two weeks, before he becomes the manager again.

Despite Grumpy being back, Wilhelm still remains the regional manager, which means he outranks Grumpy and makes it very clear in private meetings with all of us. If he caught as complaining to Grumpy, we were as good as gone. Still, a few of us are planning to have a meeting with Grumpy after the weeks (letting him get his “sea legs” back). But another department had other ideas.

During his “Reign of Terror”, the only department that Wilhelm couldn’t control was the workshop. He knew that if he treated them as bad as he did to us, they would quit and the sales would go from a small decline to bottom of the barrel real quick (as I said, custom made furniture was the number one seller).

So, the head carpenter has a meeting with Grumpy on his second day talking about “the future of the workshop”. In reality, the guy spilled the beans on Wilhelm.

With the pretext of “catching up” with the changes, Grumpy has meetings with everyone, learning what Wilhelm had done and why we had so many new staff. You could feel he was getting angrier with every meeting. He had also had an eye opening meeting with the manager of the supermarket. Finally, the time had come that he is the manager again.

On his first day back as a manager, Grumpy notifies everyone of a mandatory meeting after the store is closed. He has a solution. So gather in the store after closing hours. And Grumpy lays out the plan.

For the next couple of days, nobody except him is coming to the store. If anyone calls us, we should direct them to him. Which we did, when we started getting calls about the store being closed.

Grumpy’s answer to the HQ was simple: the staff was working on a second job during their shifts, which is a breach of contract, so I had to fire them all and find new staff.

That caught HQ’s attention, because nothing of the sort was reported in the past six months. They asked Grumpy for evidence, which he happily provided with our written testimonies. Which brought a s**tstorm on Wilhelm.

You see, Wilhelm had an “arrangement” with the supermarket manager. He got a kickback from our unpaid labor for the supermarket and the manager offered the same thing to Grumpy. He also included that Wilhelm regularly declined to sign overtime, which meant that if any one of us went to the Labor Department, the company would get a really huge fine.

Wilhelm quickly got fired. We all received calls to “interview” with the company for an open position. We all received severance pay for our “firing” plus most of the unpaid overtime (about 80% of it). Almost all of us went back to work with a small pay raise based on experience.

The company took a long, hard look on the supermarket chain and distanced themselves from them (they stayed until their lease was over, but no shared employees anymore and a lot of theirs jumped ship to our side). Next time Grumpy had to take time off, one of his assistants took over.

Two did a stellar job, leading to be promoted to managers in other stores. Grumpy brought back his usual managerial style, leading again to a rise of sales and customer happiness.

I left the job three years later for a better paying position, but I still remember Grumpy as one of the best managers I ever had.”

Now it’s time to see how folks on Reddit responded to this story.

This reader said it should be obvious to all employers that happy workers are better workers.

No doubt about it! 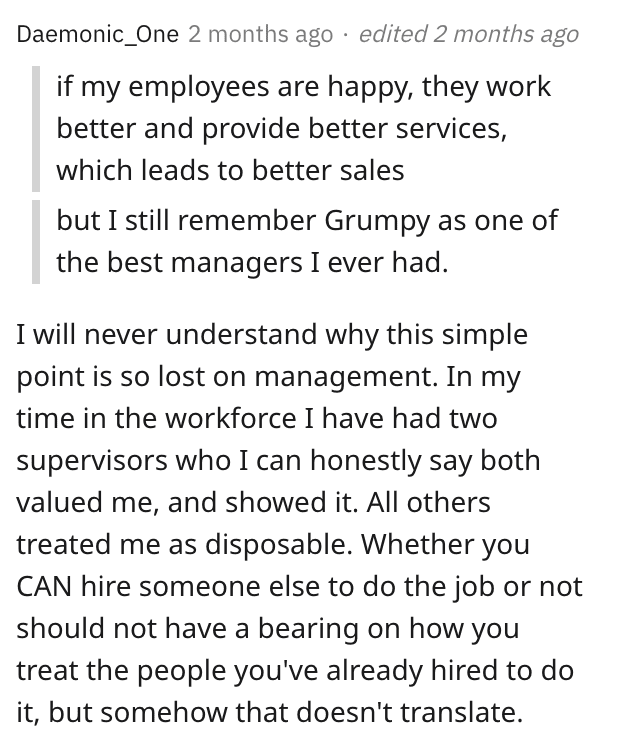 This reader said just because you have a business degree, it doesn’t mean you’re going to know how to work with folks…or to manage them. 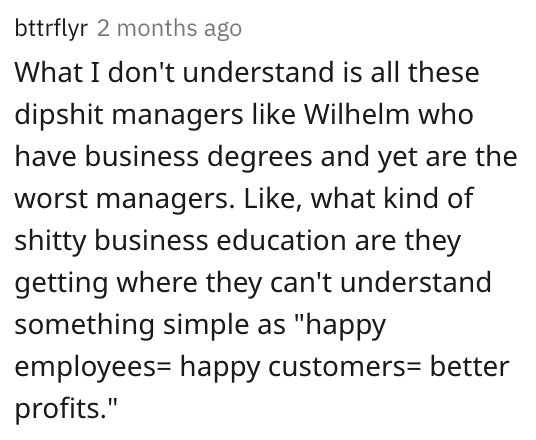 Another person said the old adage that “anyone can be replaced” is outdated and backward. And it hurts companies in the long run. 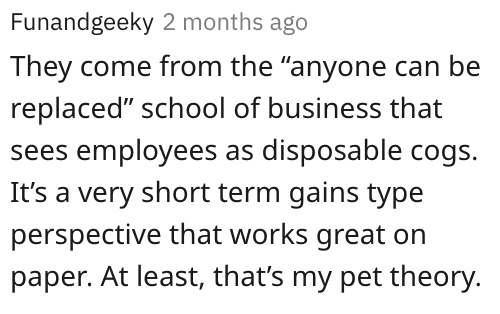 And finally, this Reddit user said that, unfortunately, as long as sales are good, bad behavior in the workplace usually doesn’t go unpunished. 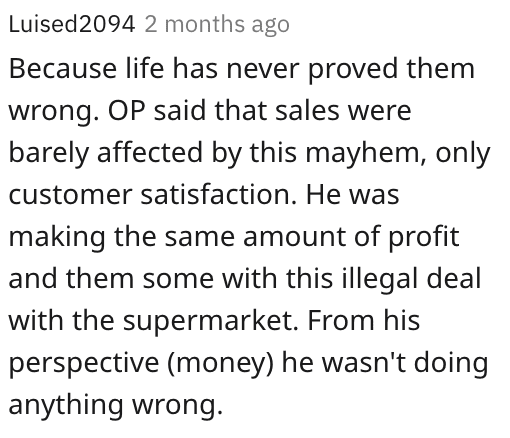 In the comments, tell us about your bad work experiences.