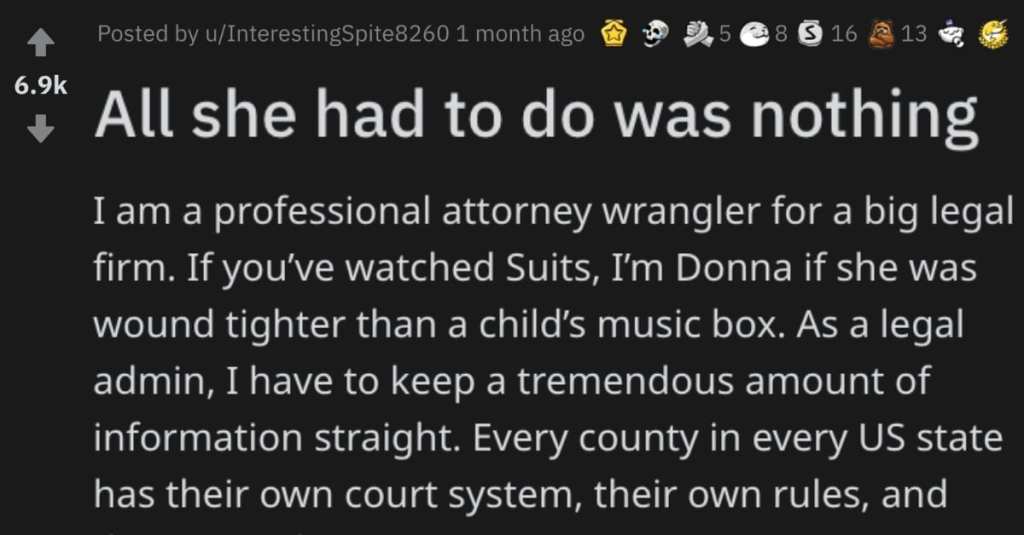 Toxic Manager Gets Demoted After an Employee Decides to Quit

That’s how the old saying goes…

And we’re about to get a real dose of it with this story from Reddit.

All she had to do was nothing

I am a professional attorney wrangler for a big legal firm. If you’ve watched Suits, I’m Donna if she was wound tighter than a child’s music box. As a legal admin, I have to keep a tremendous amount of information straight. Every county in every US state has their own court system, their own rules, and their own idiosyncrasies.

I have five attorneys on my team. Despite the TV shows, it’s pretty unusual for a lawyer to have a special secretary all their own unless they are Very Important, so five is a solid number.

Because of The Nameless Death that took over the world last year, a secretary that left in January 2020 has not been replaced yet, and I’ve been babysitting one of the partners (Bingley) in the meantime.

It’s been a fun learning opportunity, as Bingley works for an entirely different region and type of law than the rest of my team. Also he has a case where a truck EXPLODED (was empty), which is AWESOME.

My manager (Lady Catherine) is the worst. You know the type- she plays favorites, her best-loved word is no, she MUST be involved in every conversation because she is just that important and necessary. We don’t get along, because I am a stubborn know-it-all who’s been proven right a few too many times.

Highlights include forbidding me from using the same resources other admins had access to, on her orders, including backup admins when my workload was too big and then denying my overtime requests. I literally had no way to do my job some days.

It’s worth noting that the REASON Bingley’s secretary left was specifically because of Lady Catherine. In fact, four additional admins quit over the year explicitly because of her.

Anyway, at this point, I’d been working with Bingley for almost a year. It was November 2020, and we’d settled into a pretty good routine. I’d gotten used to filing pleadings in a different state, and no longer needed to double check ALL my work for nuance.

Because Law still operates in the stone ages, a few US states still require hard-copy filing. Anything we want the judge to read has to be sent by actual mail, on actual paper, to arrive in the judges actual hands. It’s a pain, most states let you file electronically, but whatever. Bingley mostly only has cases in one of the hard-copy states.

Lady Catherine, in her excessive wisdom, butted in uninvited and instructed me to include a cover letter when mailing a new filing. This confused me, as I had been filing for almost a year and no one, including the admin who originally trained me, had mentioned a cover letter.

I told her this, and she basically told me to suck it up. I called the court admin to make sure I wasn’t crazy and that I hadn’t ruined a years-worth of filings, and the court admin literally LAUGHED and said to please not include a cover letter ever. So I didn’t.

Imagine my surprise when Lady Catherine called me, writing me up for insubordination! Even knowing the court rules and the judge and the court admin explicitly said to NOT SEND A D**N LETTER, she was right because she is ALWAYS right and I am, and I quote, “a disrespectful little s**t and she was tired of me”.

A warning went into my employee file, pending disciplinary measures. The next day, she emailed my team telling them to reduce my score on my yearly review, as she KNEW I had been rated too highly for what my abilities REALLY are. It felt to me like she was preparing to fire me by creating a history of poor performance.

Well, if you’re so tired of me, Madam Manager, I can leave!

Within a week of looking, I found a new position. Now, here’s the issue- I f**king love my team. This is the BEST work team I’ve EVER been on. We take each other seriously and we genuinely love each other.

A lot of times admins get pushed around because we don’t have fancy degrees, but not here. Calling in to quit, I cried. I cried a lot. I cried to the point that one of the partners (Bennet) asked if I wanted a counter offer. I said no, because that wouldn’t solve anything. He asked what I meant.

At this point I had given myself hiccups from weeping, and one of the partners on my team (Gardner) was calling him asking if HE and his workload were the reasons I was leaving, so Bennet let me go do other things, like day drink and create a shrine out of legal forms.

I thought it was the end of it, until a friend in another office (Charlotte) called me asking wtf I was doing, she doesn’t have TIME to train someone into being the new me, and I was the only admin she actually trusts in my office so WHY was I leaving her all alone??? I told her. And she told Gardner. And together they plotted.

First, Charlotte is the manager in her office, so she is on equal footing with Lady Catherine. They also report to the same person.

Charlotte called the district manager and told him that Lady Catherine was driving admins away and that the most recent quitter (me) was the only person who knows how to do a LOT of the work on my teams, and my loss was a serious blow. (Apparently this is true, which is both heart-warming and terrifying)

Meanwhile, Gardner called up a fellow partner and told her that his world would collapse in on itself if I left. He would go to the nearest bridge and jump off it, which would be pretty impressive in a land-locked state. They Had To Do Something.

I got a call the next day from Bennet, saying they had a counter offer they were really hoping I’d take. Basically, instead of Lady Catherine, I would report directly to Gardner.

Lady Catherine would be forbidden from interfering with me without first asking Gardner for his permission. This solved the issue and I got to stay with my team, so I happily accepted. I thought the debacle was over.

The debacle was not over.

Unbeknownst to me, after looking at the evidence (exit interviews, emails, memos), Bennet put Lady Catherine on a performance improvement plan and she did not get an end-of-year bonus OR raise. Turns out I had been absolutely correct- Lady Catherine’s behavior and treatment had been the explicit cause that six secretaries quit in less than a year.

I got a call last week from Charlotte. I figured she wanted to gossip about coworkers or rant about how a shared client is a big ol’ headache, but it was actually to give me a heads up.

Lady Catherine had been stripped of her management duties.

I no longer had any contact with her, which was GREAT, but it also meant I didn’t see that her behavior had actually doubled down on the admins unfortunate enough to still be under her thumb.

She had missed EVERY SINGLE ONE of the benchmarks on her performance improvement plan. Charlotte had called me to ask my opinion on who should be the new manager, as I know everyone and she was helping cover some things as an outside manager.

Now, I know some of you are thinking “YES! Become the manager and fire Lady Catherine!” But I am not a sadist. I want to stay on my team and do what I do best, which is being a cheerfully annoying RESPECTFUL little s**t. I told her one of the more senior admins would probably need some guidance, but would be amazing at it.

NO ONE has to deal with Lady Catherine anymore. She is now a mere paralegal and not anyone’s manager at all. If she had just left me alone and not interfered where she wasn’t needed, none of this would have happened.

All she had to do was nothing.”

Now let’s check out how folks responded on Reddit.

This reader said you gotta be courteous to administrative staff members or you’re really not gonna get anywhere.

Keep that in mind! 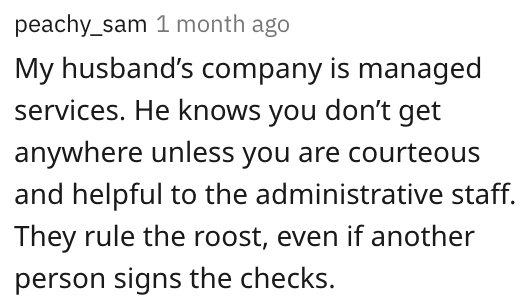 Another person said that if you get on any worker’s bad side, you’re gonna have some serious trouble. 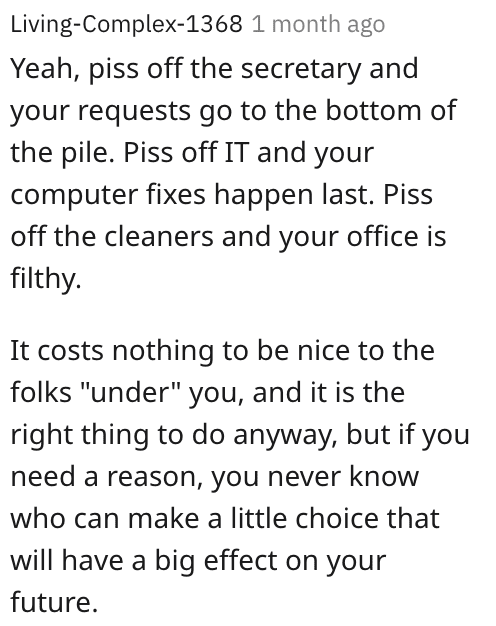 This individual stated the obvious: the service staff is the heart and soul of any company. 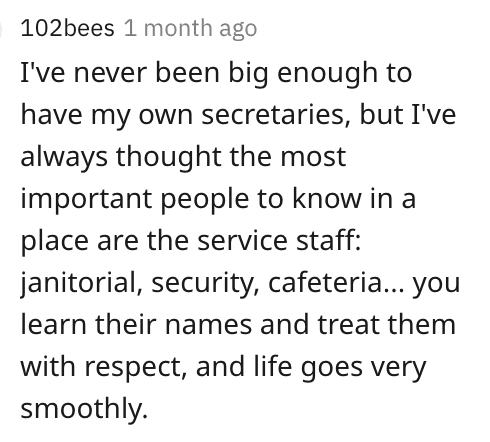 And another person said that kind of attitude spans across all industries and jobs.

It’s the right thing to do AND it’ll help you out in the long run. 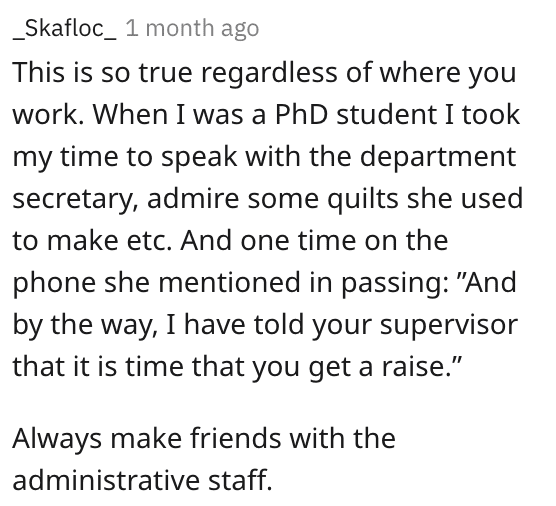 Have you ever had a really awful manager?