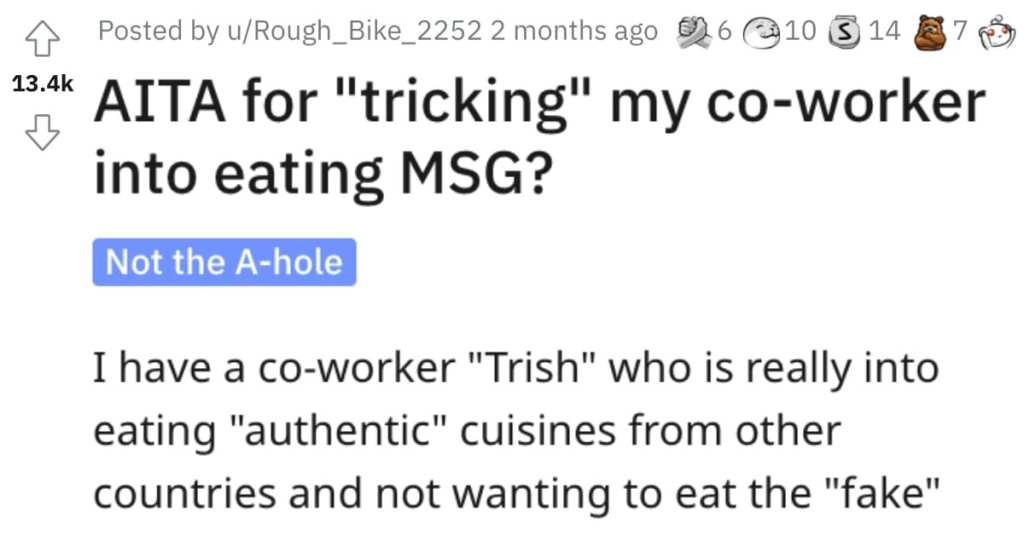 When it comes to food, you know that people are going to have strong feelings and opinions…even if they don’t really know what they’re talking about.

And that’s exactly what happened when worlds collided at an office over what’s authentic and what’s “Americanized” Chinese food.

And this person wants to know if they’re wrong for how the whole thing turned out. Let’s take a look at what went down.

AITA for “tricking” my co-worker into eating MSG?

“I have a co-worker “Trish” who is really into eating “authentic” cuisines from other countries and not wanting to eat the “fake” stuff (e.g. she refuses to eat Dominos because according to her, Italians would never eat such a thing).

She also claims she has an MSG allergy. There’s a Chinese restaurant close by, but we haven’t catered from them since she made a large spectacle of stomach pains and headaches when we ordered from them over a year ago. She’d ordered a separate dish of plain steamed veggies and meat, but claimed there must’ve been cross contamination and demanded that we not cater from them again.

Whenever someone gets Chinese takeout, she loudly talks about how it’s fake Americanized Chinese food and that the MSG would give us cancer. She frequently mentions how much she misses the “real” Chinese food she had when she went to China (once, like a decade ago).

She often comments on my food (I’m Chinese) which I cook from home, saying things like “wow that smells so good; you can tell it’s authentic and doesn’t have preservatives and isn’t catered to white people like the food from that restaurant” (she’s white). I mostly ignore this. And honestly, I wouldn’t even call my food “authentic” Chinese food. It’s just stir fry with sauce generally.

Last week, I volunteered to bring in food for my team of six people (edit: to clarify, Trish is NOT part of this team), since I know they like the food I make. I do cook with MSG sometimes. It’s definitely not something all Chinese people do, but my family does it with certain dishes because it makes things delicious. There were some leftovers, which someone put in the fridge after the meeting, with a note saying anyone could take some. I didn’t really think about it, since this is normal.

Well apparently Trish had some of the food I made. At the end of the day, she came by my desk and commented on how delicious my “real” Chinese food was. She claimed could tell I made it without preservatives or MSG because she would normally get sick within minutes if she accidentally had MSG.

She also claimed it tasted just like the food she ate when she was in Beijing (I’m not even from Beijing). After she went on for a few minutes, I just told her that there was actually MSG added to some of the dishes I made. But it was good to know her allergy was cured now, since I wouldn’t want her to get sick.

She freaked out, and suddenly claimed she had a huge headache and felt like she was going to throw up. She yelled at me for not telling her I put MSG in the food (I didn’t realize she would eat it since she normally doesn’t eat the communal food and it was intended for my team members, not her).

She went to HR because I supposedly tricked her into eating something I knew she couldn’t eat, and now I have a meeting with HR next week (Idk how this is going to go). In all honesty, maybe I was kind of hoping to peg down her anti-MSG crusade, but if she had asked, I would’ve told her what the ingredients were.

This person made it clear: the writer of the post did not act like an a**hole and they argued that the MSG allergy is actually an anti-Asian myth. 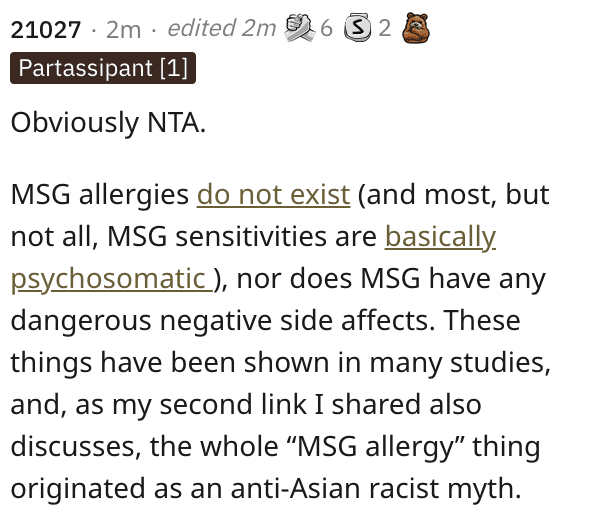 Another Reddit user said that the person should go to HR at their company and talk about how the woman “Trish” is being racially insensitive.

This person said that the woman is obviously making the office an uncomfortable and hostile place for the employees.

And they argued that the writer didn’t “trick” the woman into eating anything. 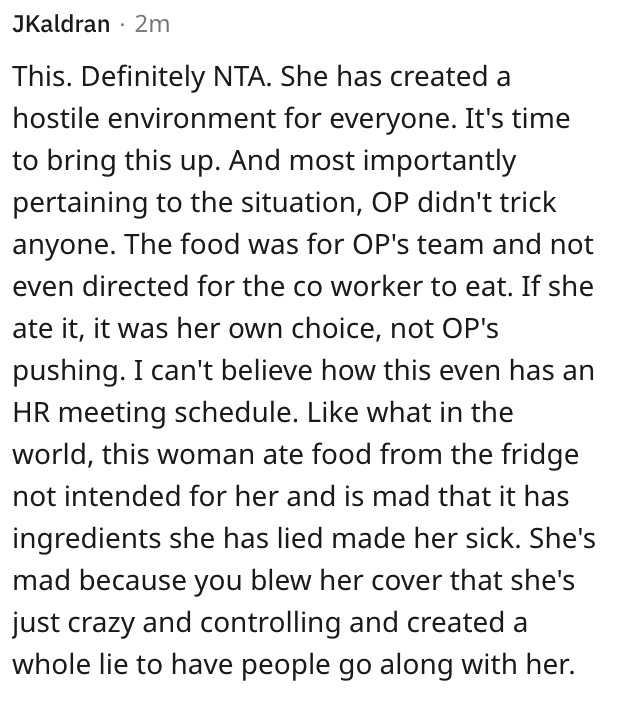 Finally, this person, who happens to be a former HR manager, said that dealing with these kinds of petty arguments and disagreements in the workplace is actually just a big waste of time. 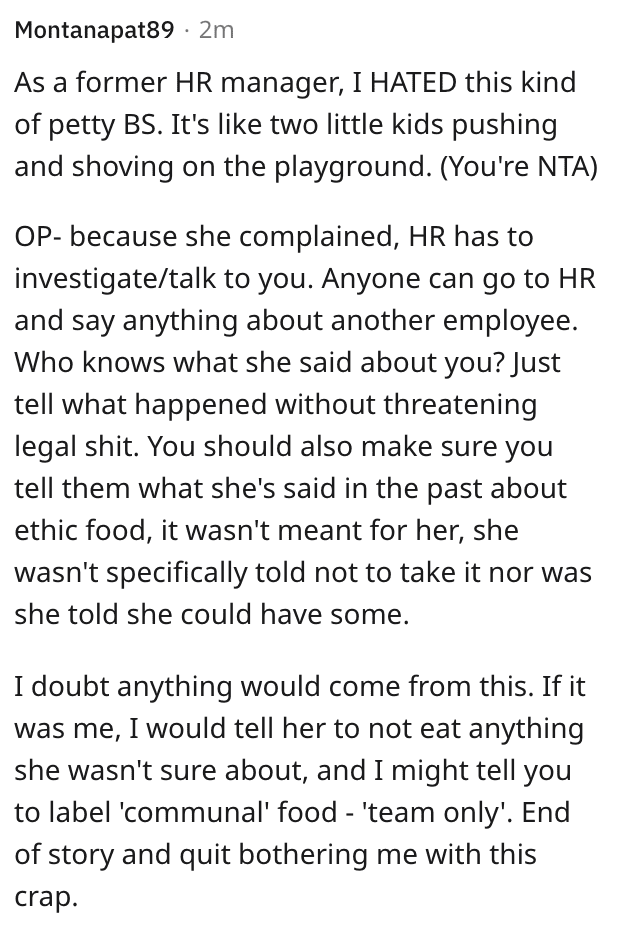 How do you feel about this story?