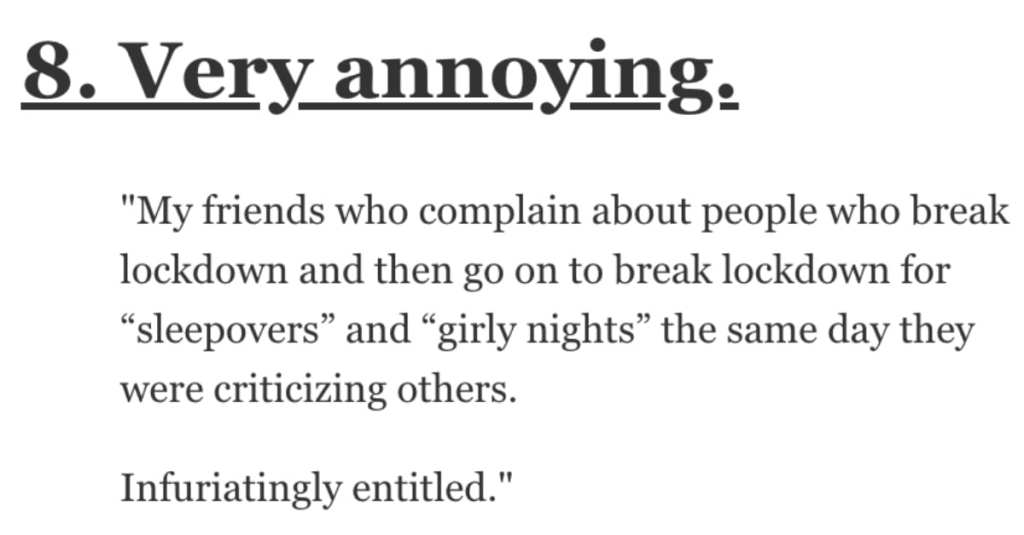 Ready to Hear Some Stories About Hypocrites? Here’s What People Had to Say.

There’s almost nothing worse than a hypocrite, huh?

But, as you already know, they’re everywhere and we have to deal with these people whether we like it or not.

Folks on AskReddit shared stories about the most hypocritical things they’ve ever seen.

“When I was in college there was a super immature guy that I believe only got into our private school because his parents had money.

One day we were sitting in his dorm room watching tv, and he speaks up: “god, don’t you just hate people who steal things for no reason?” The rest of us turned and stared in disbelief. Behind him on a shelf was a collection of all the things he’d stolen from businesses. I remember Red Robin seasoning and bowling shoes, but there was a lot more.

A glimmer of self awareness pierced through his thick skull and he back tracked somewhat. “I mean for me, it’s like ‘my thing’, but still!””

“A post saying stuff like “don’t forget to wear a mask, we’re all in this together, stay safe everyone!”

Followed by a series of videos taken inside of a crowded club, bumpin’ and grindin’ up on each other, not a mask in sight.”

“People who watch TV for hours on end saying playing video games is a waste of time.”

“My mom got very angered that our governor was allowing people to have family over for Thanksgiving, and not doing his part to stop the pandemic.

A week later, she was very upset about how my grandma had declined her invitation to come have Thanksgiving with us.”

“I work in a courthouse.

People who abuse children for years and years and when they get on the stand they breakdown crying and plea for mercy.”

“When I was going through my college party phase I ended up hanging with kids who graduated from a local Christian school. They drank, did drugs, and bragged about premarital s*x like a lot of college students.

When you talked about politics tho they immediately would go on and on about the moral failings of society and how it needs to be more Christian yadda yadda.”

“Televangelists preaching how we should live modestly while they own several private jets to fly around the country spreading the word of The Lord.

Sometimes they’ll come on TV saying God came to them in a dream saying they needed more.

Jesus would fly coach if he flew at all.

I believe Jesus also preached about taking in the displaced, etc?

Iirc in 2017 Joel Osteen was not allowing hurricane evacuees into his megachurch.”

“Others must follow the rules but they don’t apply to me”.”

“I’ve been repeatedly s*xually harassed by a gay man before and have even had to make sure he didn’t find out where I lived so he couldn’t keep doing it.

When I explained this one time to my co-workers one sneered and said I was just being homophobic and assuming it was harassment. I said the man has repeatedly attempted to convince me to sleep with him despite my refusals, attempted to find my home, and once tried to trap me in a public restroom to make sure he couldn’t lose track of me.

If I was a woman in this situation would my coworker even think of telling me that I was overreacting? Fortunately the rest of my crew supported me and tell him it was hypocritical to assume s*xual harassment can only happen to women.”

“A chick who posted about how she doesn’t eat beef because she loves cows, the next day posted a photo of her new designer leather handbag.”

“Just my dad in general. Here’s some highlights.

As a child, he’d often tell me I had to think for myself, but then he’d beat me if I said things he disagreed with. Sometimes, he’d pose questions to me, and then hit me until I guessed the chain of logical jumps that led to the conclusion he was looking for.

He once went on a 4 hour rant about how my generation are all dirty communists and Muslims are all terrorists and a big gay conspiracy and other such nonsense. I couldn’t get a word in edgewise, but he had the gall to end with “I’d be willing to change my mind if anybody were willing to have a discussion with me, but nobody’s willing to talk with me”.

When Trump got elected and people were complaining about it, his response was “how dare they question the president; that’s disrespectful to the office.” A month earlier, he was still aboard the Obama birther train. These days, he thinks Biden stole the election.

In high school, he sometimes made fun of me for being a creature of habit. He’s had the same routine, worn identical outfits, and eaten the same lunch every day for the past 20+ years at least. I didn’t have much say in my routine back then anyway. School ate up most of my time, and it’s not like my parents allowed me to get together with my friends.

What’s your most infuriating story involving a hypocrite?