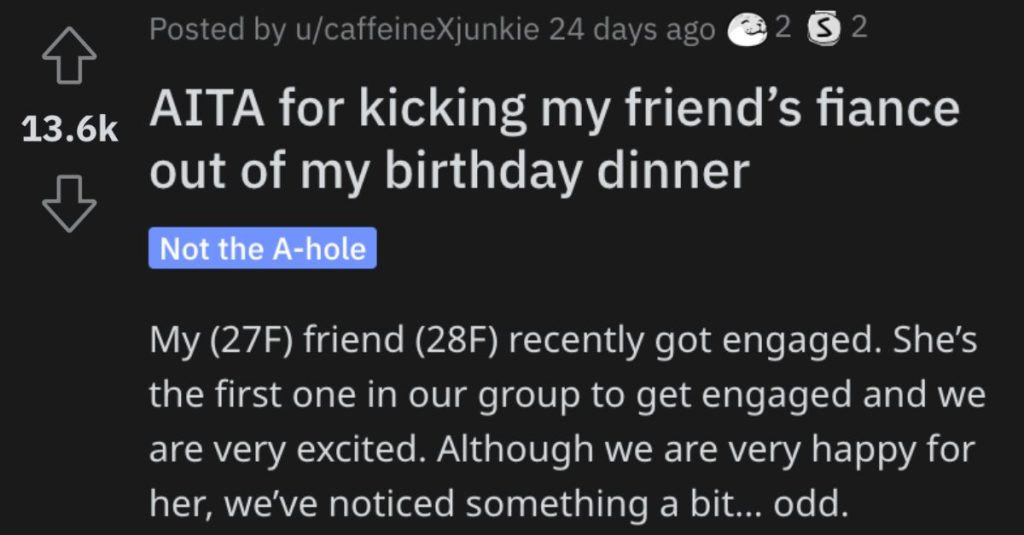 She Booted Her Friend’s Fiancé Out of Her Birthday Party. Did She Go Too Far?

Yes, folks, you’re about to read a story from Reddit’s “Am I the A**hole?” page about a woman who is conflicted about whether she was out of line for kicking her friend’s fiancée out of her birthday party.

Let’s see what went down!

AITA for kicking my friend’s fiancée out of my birthday dinner?

“My (27F) friend (28F) recently got engaged. She’s the first one in our group to get engaged and we are very excited. Although we are very happy for her, we’ve noticed something a bit… odd.

Her fiancé is ALWAYS there. I mean, every event my friend is invited to, he’s there. Girls night out? He’s there. Weekend getaway? He’s there. Movie night with the gang? He’s there. He. Is. Always. There. We are all singles so he’s the only guy in our chillings.

For my birthday this year, I wanted to do a little dinner at one of the girl’s condo. Movies, boardgames, good food. I really wanted it to be only girls since two of the group are religious (one jewish, one muslim) and would be able to remove their veil and dress “less modestly” (term they used). So I specifically told my friend to NOT bring her fiancé as it is only girls. She told me “no problem, cant wait to be with you all”.

WELL. Guess who showed up! Yup. Her fiancé. We were already all there at my friend’s condo and when I opened the door my friend was there with her fiancé. She was about to come in when I stopped her. I told her that he shouldn’t be here, that it was girls only. She told me it wasn’t a big deal and he is always with us. I told her it was a big deal and she’s disinvited and she and her fiancé can leave. She told me I was being ridiculous, a hypocrite and an asshole for doing this. She left and she stopped talking to me.

Some of the girls told me it was an asshole move and I should’ve just let it go and let her in with her fiancé but I don’t agree. AITA?

Now let’s see what Reddit users had to say about this story.

One reader said she’s NTA and that there could be a couple of different things going on here. 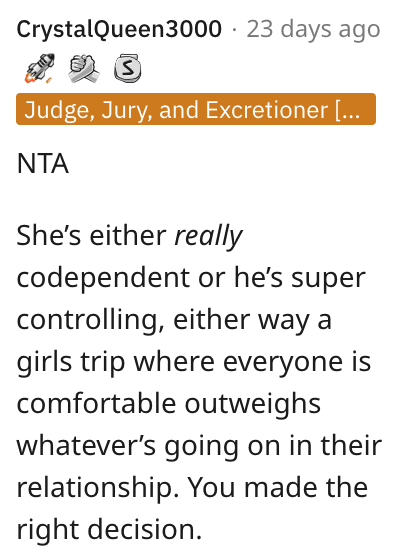 And this individual brought up another possibility… 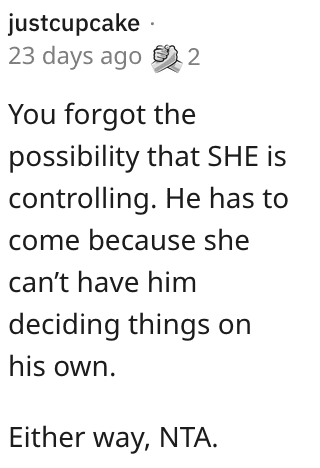 And this individual said it really sounds like her friend is the controlling one. 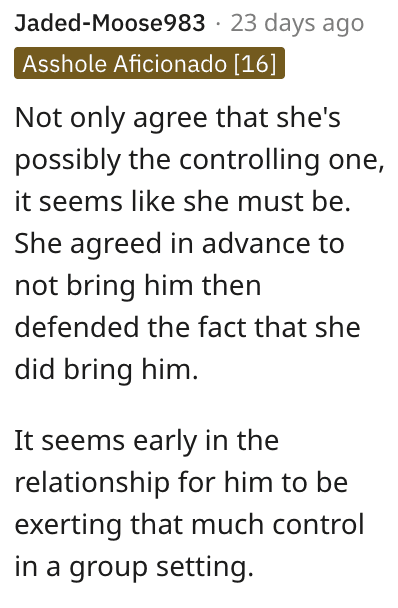