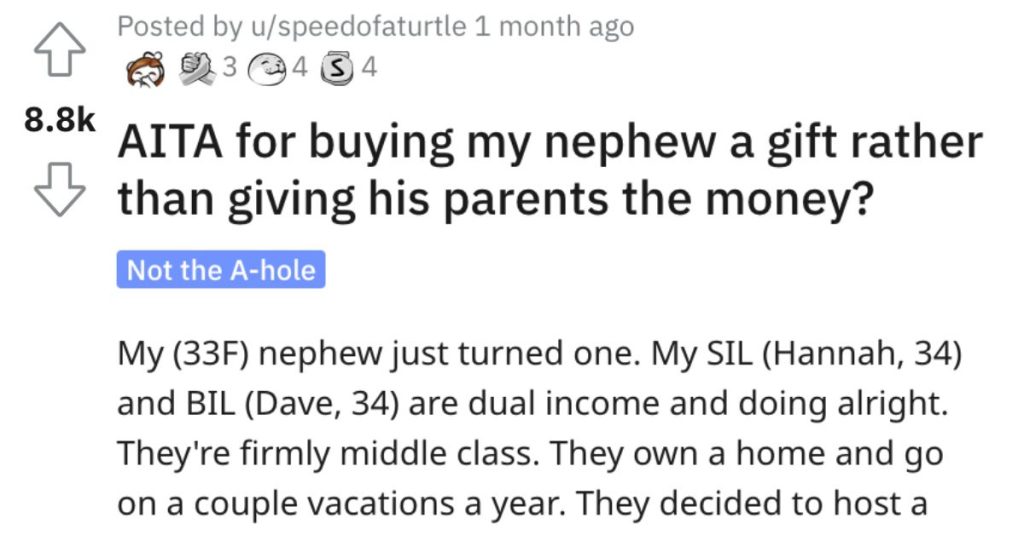 She Bought Her Nephew a Gift Instead of Giving His Parents the Money. Is She Wrong?

And that’s weird to me!

But hey, families are complicated…

Check out this story from Reddit’s “Am I the A**hole?” page and see if you think this woman was out of line for buying her nephew a gift.

AITA for buying my nephew a gift rather than giving his parents the money?

“My (33F) nephew just turned one. My SIL (Hannah, 34) and BIL (Dave, 34) are dual income and doing alright. They’re firmly middle class. They own a home and go on a couple vacations a year. They decided to host a big party for their first and only child’s first birthday.

A little background – my husband and I are kind of known for getting good birthday gifts for the nieces and nephews. They range in age from 1-13 and we know that the other 2 families struggle more financially than Hannah and Dave (who this post is about).

So, we have historically always asked what their child would like and go out of our way to get them something special. I’m not talking big ticket items like an iPad, but like, $150-200 for each gift, each year.

I asked Hannah what her son (William) would like that he doesn’t already have at home. She didn’t answer my text. Later in the day, she sends a mass email to both sides of the family and friends who are attending William’s first birthday. This was the email:

“We look forward to having you at William’s first birthday. Some of you are asking what you can buy for him. What he really needs is a new deck to play on in our backyard. Therefore, we ask that everyone donate funds towards that goal, rather than physical gifts. The deck will cost a total of $10,000 and we anticipate that 35 of you will be attending. Please give as you’re able. William will be so excited by this addition to his outdoor space.

So, off the bat, this request sat weird with me. I understand shifting towards experience-based gifts over physical gifts. I see the environmental argument for that and also the human element…but that’s not what this was. It was a deck and I’m fairly certain Hannah and Dave can afford this deck without a fundraiser.

Anyway, the part that may make me an AH is that I decided to totally disregard the email and spent $200 on a new train table for William. I had noticed that he fell in love with the one at our house that our boys have. I justified it because he’s too young to realize that his parents are cheating him out of gifts, as I see it.

Hannah noticed the large box at the party among a pile of cards filled with money. She asked who brought it and my husband (her brother) said “we did.” She said “I specifically sent an email after getting your text. Did you not read it?”

Husband told her to take it up with me. Later on she told me she was really frustrated and disappointed in me because she expected we would be contributing the most to the deck, as we have more money than the other family members. I said we wanted to get something just for William. Hannah scowled and told the rest of the family that I was using her son’s birthday to grandstand and make them look bad. Rest of the family is split on it.

This reader said that Hannah made herself look bad.

And this reader said this present is for the kid. What a concept… 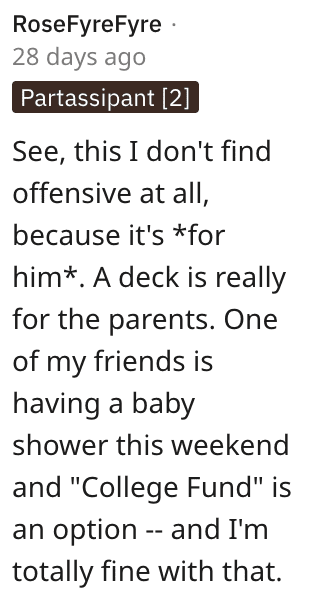 And another Reddit user said the son will definitely prefer a toy rather than money for their parents’ deck. 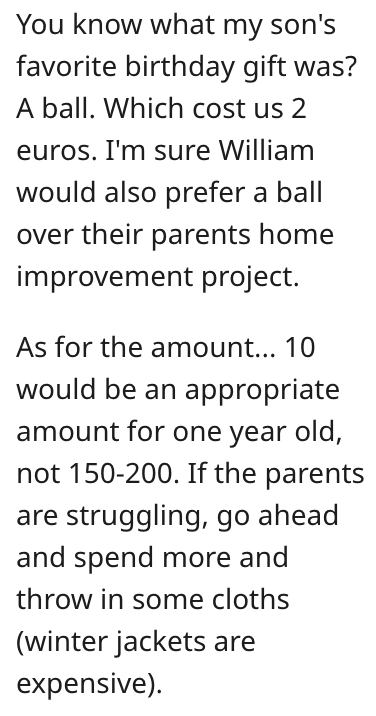