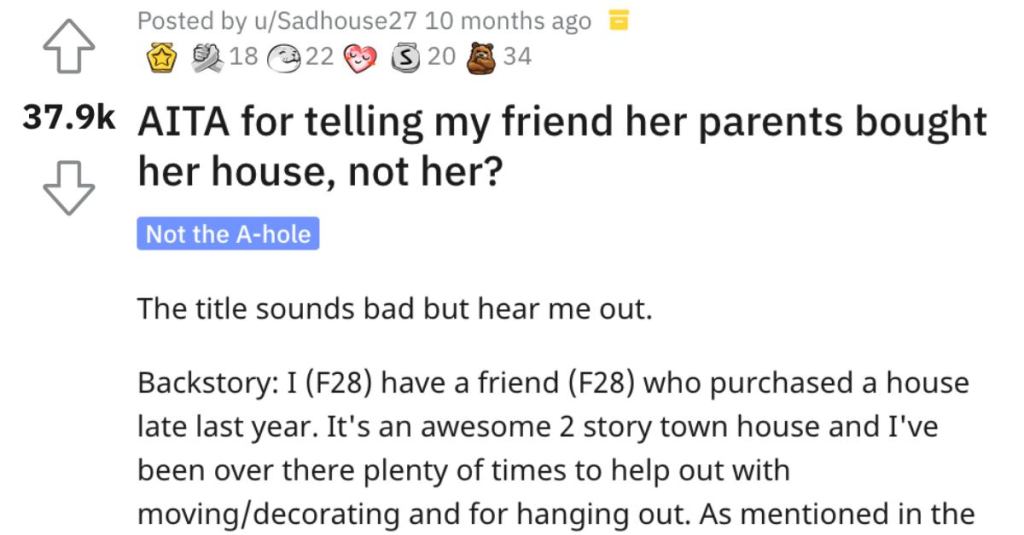 She Called Out Her Friend Because Her Parents Bought Her a House. Was She a Jerk?

People tend to get pretty touchy when their finances come up.

And when you call someone out and tell the truth about a big purchase such as a house, you know there are going to be some hard feelings.

Take a look at this story and see if you think this woman acted like a jerk.

AITA for telling my friend her parents bought her house, not her?

“The title sounds bad but hear me out.

Backstory: I (F28) have a friend (F28) who purchased a house late last year. It’s an awesome 2 story town house and I’ve been over there plenty of times to help out with moving/decorating and for hanging out.

As mentioned in the title, her parents purchased the house for her and her partner. I truly have no issue with this as the housing market is terrible for buyers so more power to them for being home owners. I recently, unfortunately inherited my parents house, which is 3 bedroom, out in the sticks.

The issue: We went appliance shopping because most of the the stuff in the house was 10-15 years old. We were standing with an employee who I had asked to recommend some smaller items like toasters and kettles when the employee asked if I was moving out as general chit chat. I told him I was moving, and he asked whether I bought or rented.

I told him bought, because it was just easier and less awkward than telling him I inherited the house. He told me that was cool and began talking about the toasters again when my friend cut in that I had inherited my house, not purchased it. The employee went quiet and I gave her a “what was that” face. I was taken aback, she continued on saying “Yeah, I purchased my house”.

I asked “does it really matter? I’m here to buy some kitchen appliances not tell this guy my personal issues.” She grinned and said “it’s just for the record” which made me more confused and annoyed. (You can probably see where this is going) I replied “Oh okay then if it’s just for the record your parents purchased your house for you.”

The employee quickly retreated and she walked outside of the shop. I caught up with her and she said I was a massive a**hole for pointing out she couldn’t afford to own without her parents help. I returned with a very similar “my parents also helped me with getting a house too, just in a really terrible way.”

My partner agrees with me, saying that she’s the one that opened that door, but our other friends are split almost 50/50.”

This person said this woman is NTA and that it seems like her friend seems to think she’s superior. 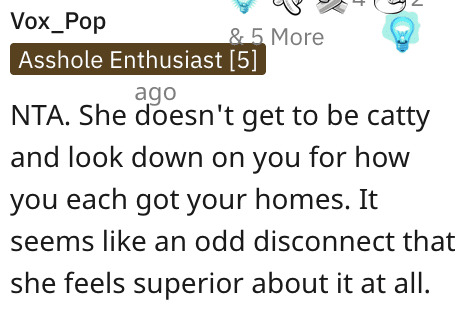 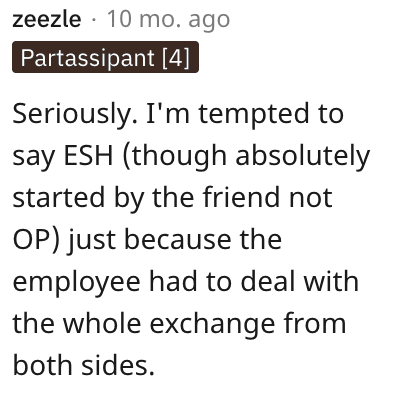 Another individual said that the woman’s friend seems like a major a**hole. 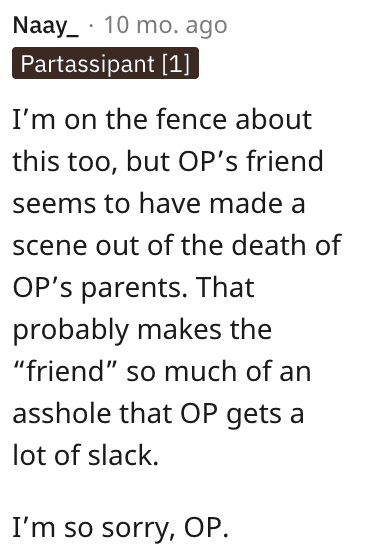