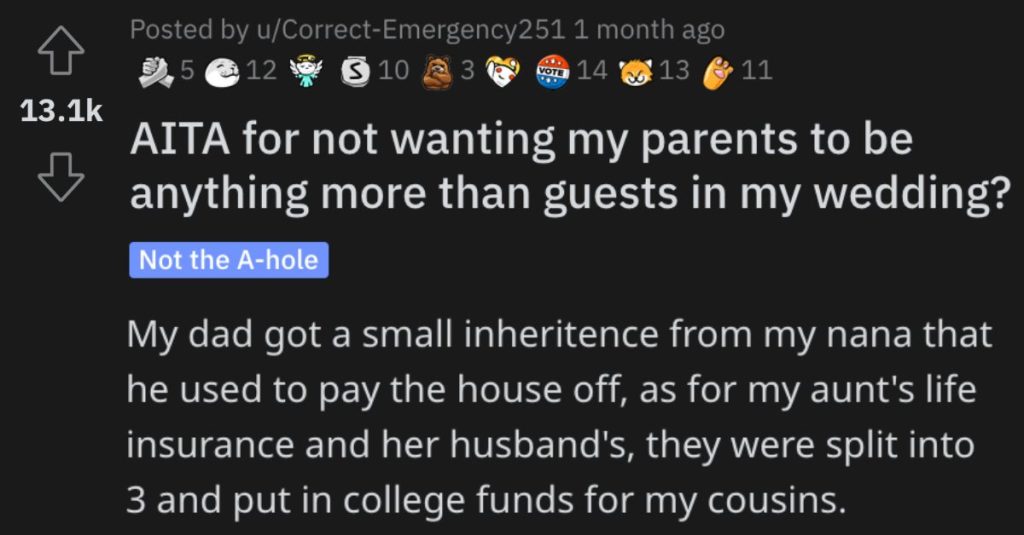 She Doesn’t Want Her Parents to Be Anything More Than Guests at Her Wedding. Is She Wrong?

You know some people get all fired up about whether or not they’re going to have a role in a wedding.

I said “some” people because some folks don’t really care all that much.

But what happens when you want your parents to only be guests at your wedding?

Read on to see what happened in this story from Reddit’s “Am I the A**hole?” page.

AITA for not wanting my parents to be anything more than guests in my wedding?

“I(27 f) am the only child of an only child (my mom) and the son of a single woman (my dad). We are firmly middle class

When I was 8 my aunt, her husband and my nana were in fatal car accident. As a result my cousins (6m), a triplet were taken in by my parents.

Up until then my mom was a teacher, but with the kids and all they needed (intensive therapy and constant reassurance) she quit her job to be a SHM.

My dad got a small inheritance from my nana that he used to pay the house off, as for my aunt’s life insurance and her husband’s, they were split into 3 and put in college funds for my cousins.

From ages 8 to 13, my parents were too focused on my cousins that they forgot they had a daughter, and the money was so tight that I had to quit all of my hobbies because my cousins’ hobbies were expensive and they needed to make sure that they maintained the same standard of living for them.

At 13 my maternal grandparents sat me down, they said that my parents drained my college fund and that they were threatened by my parents going NC to not tell me, but that I was old enough to keep the secret.

They also said that they will be giving me what they could when I go to college. I guess that was it for me, I stopped seeing my parents as anything more than an egg and sperm donor.

Fast forward to when my cousins started going to college, and I guess my parents remembered that they had a kid but I wasn’t interested in having a relationship with them beyond an occasional phone call.

Now I am about to get married, I asked my grandpa to walk me down the aisle and my grandma to take on the traditional mother of the bride role for me.

Then because I am direct like that, I handed my parents their invites in person and told them that they are welcome only as guests or not at all. They got angry and when they asked why I just laid it out on them. Now they are trying to apologize but it is too little too late for me.

My cousins contacted me trying to make me take it back, offered me what was left in their college funds since they didn’t know that I didn’t have one to make it fair. I refused of course, it’s more the emotional neglect that hurts, not the money.

But a friend said that I was too harsh, that I should forgive and forget.

This reader said that this woman’s parents should consider themselves lucky they were even invited. 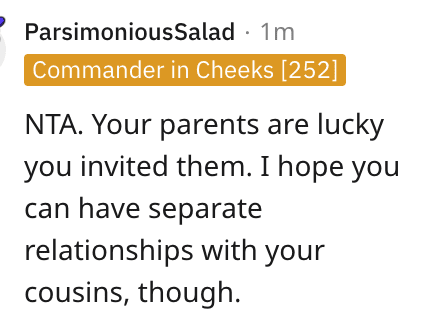 And another Reddit user had a hot take on the whole situation. 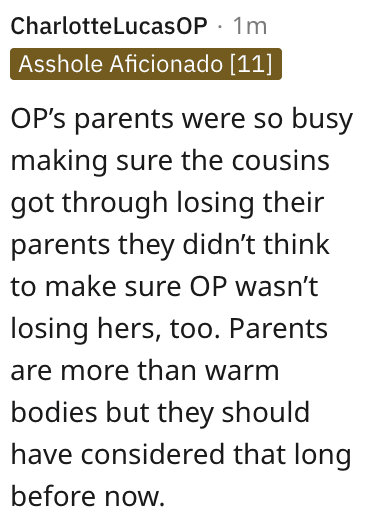 This reader said that this woman is not an a**hole and that her parents sound like they’re in denial. 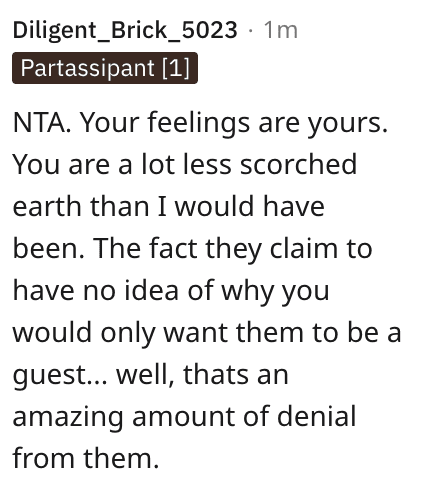 Finally, this individual said that this woman definitely doesn’t have to forgive and forget if she doesn’t want to. 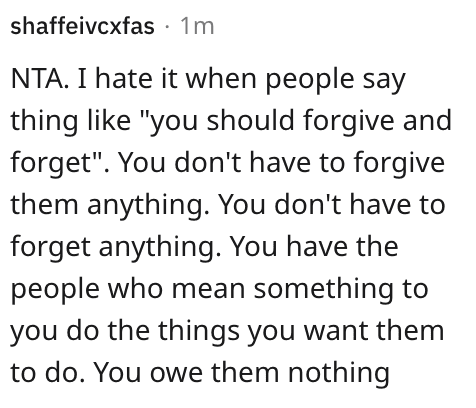 And now it’s your turn!