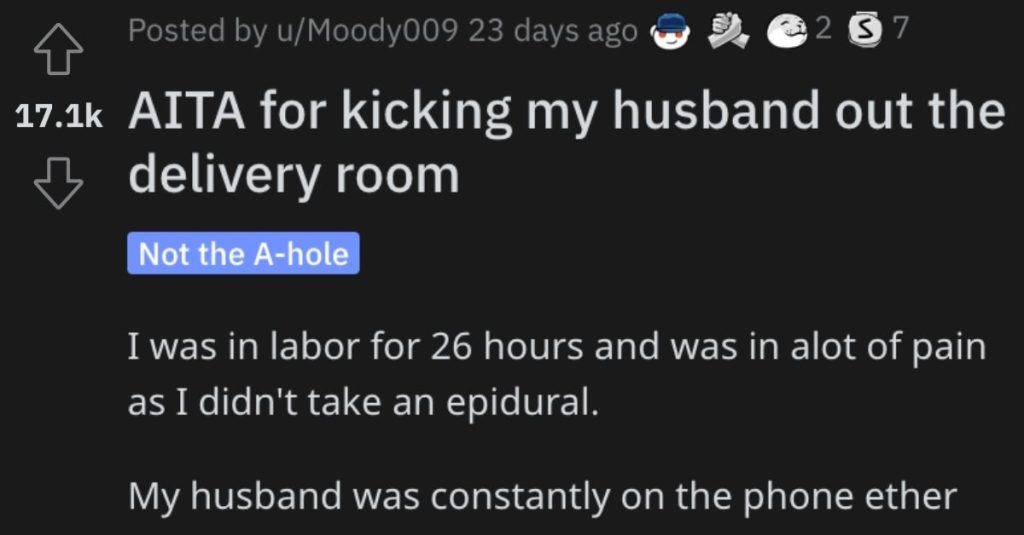 She Kicked Her Husband Out of the Delivery Room. Is She a Jerk?

And stories about women kicking their husbands out of the delivery room when they’re giving birth pop up on Reddit’s “Am I the A**hole?” page a lot…which is concerning…

But let’s get all the facts, people.

Read on to see if you think this woman was wrong for giving her husband the boot when she was in labor.

AITA for kicking my husband out the delivery room?

“I was in labor for 26 hours and was in alot of pain as I didn’t take an epidural.

My husband was constantly on the phone ether playing games or talking with with his “bros” being really loud, when I asked him to please hang up he’d hang up the phone and then like 10 mins later call them back.

He really wanted to talk to them because his friends went on a boys trip without him because I asked to stay back so he could be here when I went into labor, they were calling to tell him about how their trip was going

He apologize to them blaming it on me being a nag. I was really annoyed and told him if he wanted to talk to his friend he could do that elsewhere so I can be in pain in peace.

He was like alright fine baby I’ll just call them back later so I had about 20 mins of peace until his mom FaceTimed him where he proceeded to put me in the video call.His mom makes a comment about how she remembers when she was in labor with him and that she still did herself up, she even claimed she looked so good the doctor even was flirting with her.

I was holding back everything inside me to not say something as I didn’t want to disrespect my mother in law but at the same time she sometimes just makes the stupidest comments at the worst times and at this moment I could not stand talking to her.

A nurse ends up coming in and could tell I was upset and asks me if everything was alright and I tell her I just really want to be alone.

She ends up kicking out my husband and in turn He ends up missing the birth of our First born daughter because he left the hospital because he was pi**ed off that I got the nurse to kick him out the room.

He refused to come see his daughter afterwards because he was angry at me for kicking him out, my mother in law who did visit me in the hospital wouldn’t stop taking about how I’m such a bad wife for removing my husband from the room.

When I got home he kept on bringing up how I ruined a moment of bonding with his daughter and how he could never forgive me for that.

Am I the a**hole for kicking my husband out the delivery room because he was making phone calls.”

This reader said she’s NTA and that there are a whole lot of red flags from her husband here.

And another Reddit user made a good suggestion for her husband… 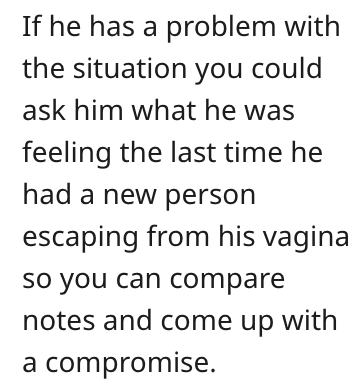 This individual agreed with both of these comments and said a woman shouldn’t have to tell a grown man how to act when she’s in labor.