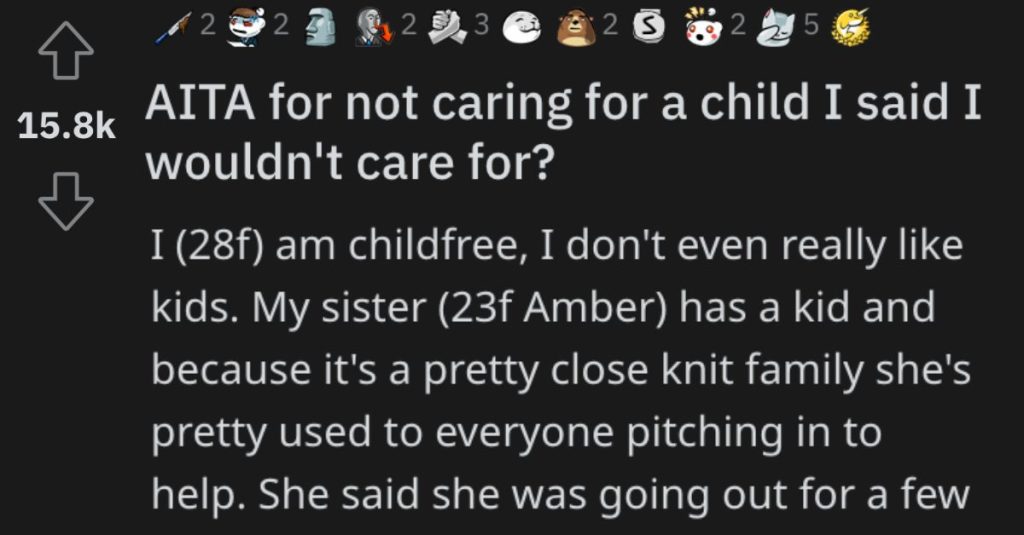 She Refuses to Watch Her Sister’s Kid. Is She Wrong?

Hey, watching kids ain’t for everybody…even if you happen to be related to them…

But there has to be some kind of explanation for someone not wanting to watch their sister’s child, right?

AITA for not caring for a child I said I wouldn’t care for?

My sister (23f Amber) has a kid and because it’s a pretty close knit family she’s pretty used to everyone pitching in to help. She said she was going out for a few hours and was stopping at my house to pick up a package delivered to me by mistake (we have the same street number on similar sounding streets – think 25 Hursh and 25 Hurst so this happens pretty often).

When Amber got to my house she put down her kid and said “thanks for watching him by the way” I asked her what she was talking about, she said she was thanking me for watching her kid as well. I said that I never agreed to it and was not okay with that but she said “we’re sisters, family helps family” and ended up leaving.

So I didn’t. I left the kid right in my entryway where Amber left him and just went about my day. I didn’t leave the house or anything but I said I’m not a babysitter and I wasn’t one. Well, Amber got mad at me when she came back four hours later and the kid had a full diaper and was crying when he saw her. I told her I said I wasn’t watching her kid and she’s lucky I didn’t call the police, but Amber said that not wanting to babysit doesn’t mean you don’t do it.

The entire family sides with her and Amber says she’s cutting me off until I apologize and make more of an effort with “my nephew”. I’ve gotten nasty messages from relatives galore and the only one who doesn’t think me a raging b**ch is my dad who doesn’t involve at all in family drama.

I do love my sister and understand family is family but am I really TA for not doing a job I expressly said I don’t want?”

This reader said that EVERYONE SUCKS HERE.

And another individual said this woman must be nuts to behave like this.

Another Reddit user said this woman was way out of line for what she did. 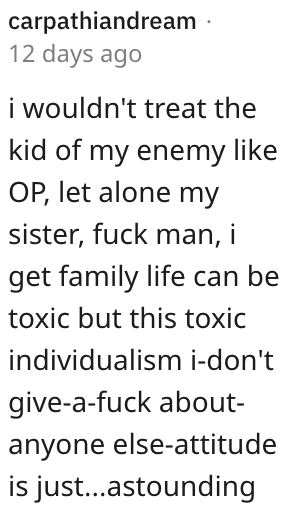