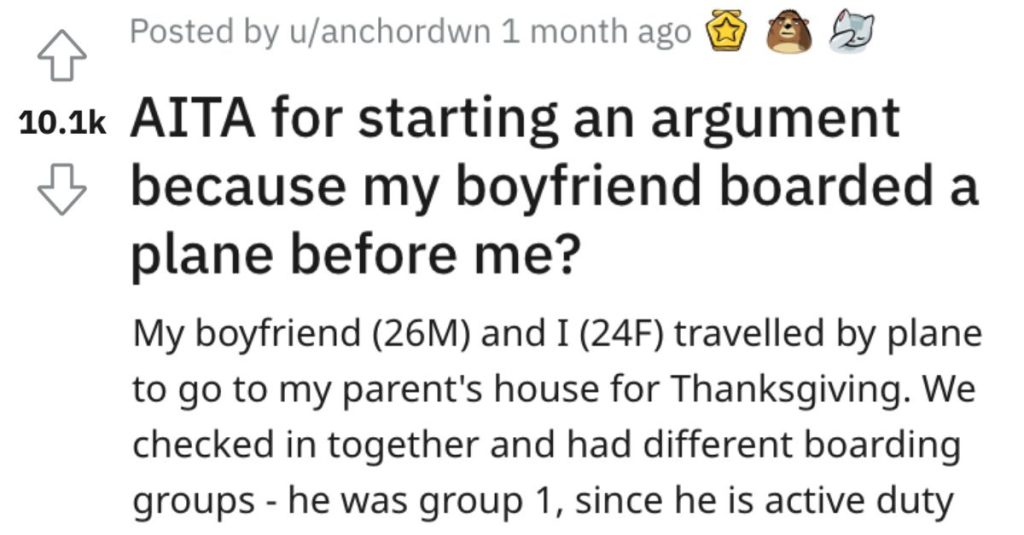 She Started an Argument Because Her Boyfriend Boarded a Plane Before Her. Was She Wrong?

But let’s get all the details of this woman’s story first before we make a judgment, okay?

Read on to get all the details.

AITA for starting an argument because my boyfriend boarded a plane before me?

“My boyfriend (26M) and I (24F) travelled by plane to go to my parent’s house for Thanksgiving.

We checked in together and had different boarding groups – he was group 1, since he is active duty military, I was group 3, for being a platinum card holder on the airline. This is significant since both groups are considered priority boarding.

We are both under the impression that boarding groups do not necessarily matter – we are seasoned travelers, very efficient when boarding planes, and the only thing that does matter is that we are on the plane before the main groups, which are the people who do not travel often and are generally slower when boarding planes.

When the plane started boarding they obviously called group one first, the group for active duty military and unaccompanied minors – and my boyfriend gets up and boards without me. I was annoyed, since groups 1 and 2 are both super small, and group 3, my group, usually gets called super fast, if not combined with group two.

After my group gets called (literally less than 5 minutes later) and I get on the plane, I told him he could have waited for my group to get called and we could have boarded together. He told me that it wasn’t a big deal, and I said it was since we were traveling together, he had never done that before, why would he do it randomly now, and he didn’t have a reason besides “it’s for me, why wouldn’t I use that group” even though my group is still considered priority boarding?

We got into a mild argument about it on the plane, nothing huge since we were, well, on a plane. He thinks I’m being an a**hole for starting an argument and being upset about him boarding before me but I think it’s justified since he had never done it before and he didn’t say anything prior.

This isn’t a new thing, where he just joined the military, he’s been AD for 8 years. We have travelled together multiple times. I think I have seen him use his military ID for a discount ONE time in the entire time I have known him.

Anyway, AITA for being annoyed at him and starting an argument for boarding before me?”

Now let’s see what folks had to say on Reddit.

One reader said she’s an a**hole and that she started a fight for no reason. 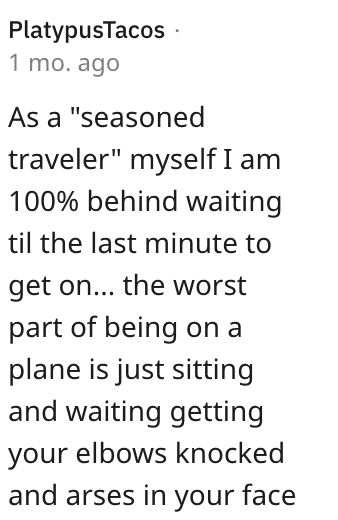 And this individual said he probably boarded early so he would get a break from her. 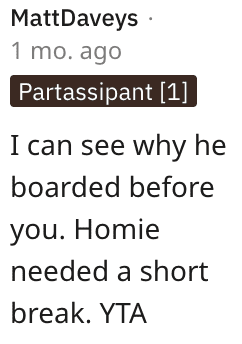