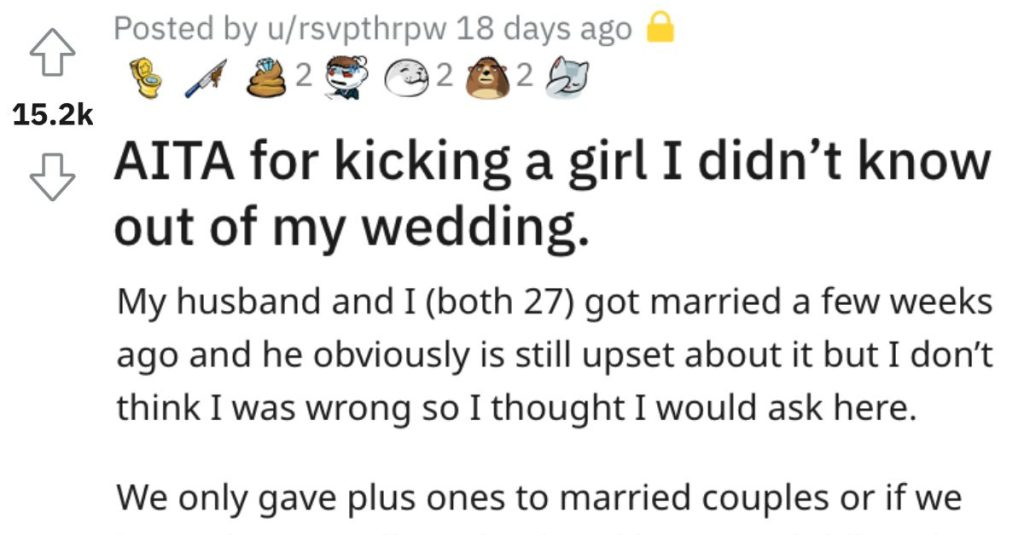 She Kicked a Girl She Didn’t Know Out of Her Wedding. Was She Wrong?

I don’t see your name on the list…so you’re outta here!

I guess anyone has the power to kick people out of their own wedding if they want to but does that mean you should do it?

That’s the question a woman asked the fine folks on Reddit’s “Am I the A**hole?” page.

AITA for kicking a girl I didn’t know out of my wedding?

“My husband and I (both 27) got married a few weeks ago and he obviously is still upset about it but I don’t think I was wrong so I thought I would ask here.

We only gave plus ones to married couples or if we knew the SO well. My husband has one childhood friend that was coming from out of state to attend. I’ve met him a bunch but only his girlfriend of three years a few times because of the distance.

I didn’t want to give him a plus one but my husband begged since he was traveling and didn’t know anyone else at the wedding and he didn’t want him to be uncomfortable or have to travel alone. I said fine just to make him happy.

Flash forward to the reception I see him with some girl I have never seen before. I asked husband what was up and he told me that his friend and his gf broke up a few days before the wedding and since he already rsvped as 2 he brought a friend with him.

I was p**sed since I made an exception for him and I didn’t want anyone random at my wedding. I had one of my bridesmaid go to him and tell him he could stay but can his date please go back to the hotel this is a private event.

He said ok and didn’t make a fuss but he left with her and didn’t come back. I though on everything was fine and had a great night.

My husband found out about it the next day and we got in an argument. He’s mad because his friend traveled and I kick him out without talking to him. I didn’t kick him out just his date.

Now it’s a few weeks later my husband still brings it up from time to time and his friend hasn’t been answering his texts. I kind of feel bad but it was my wedding and I didn’t want any strangers there.”

This reader said she’s not only an a**hole but she’s a GINORMOUS a**hole.

And this Reddit user said she’s obviously not trustworthy. 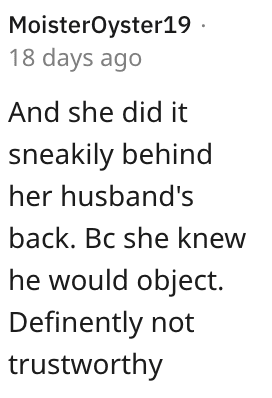 Another individual agreed and said this was her husband’s wedding, too, by the way… 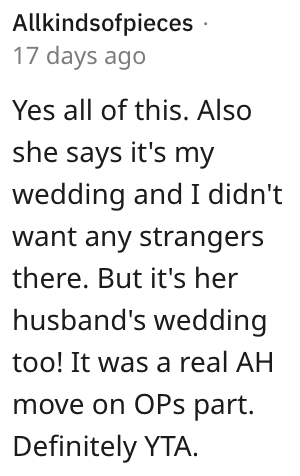