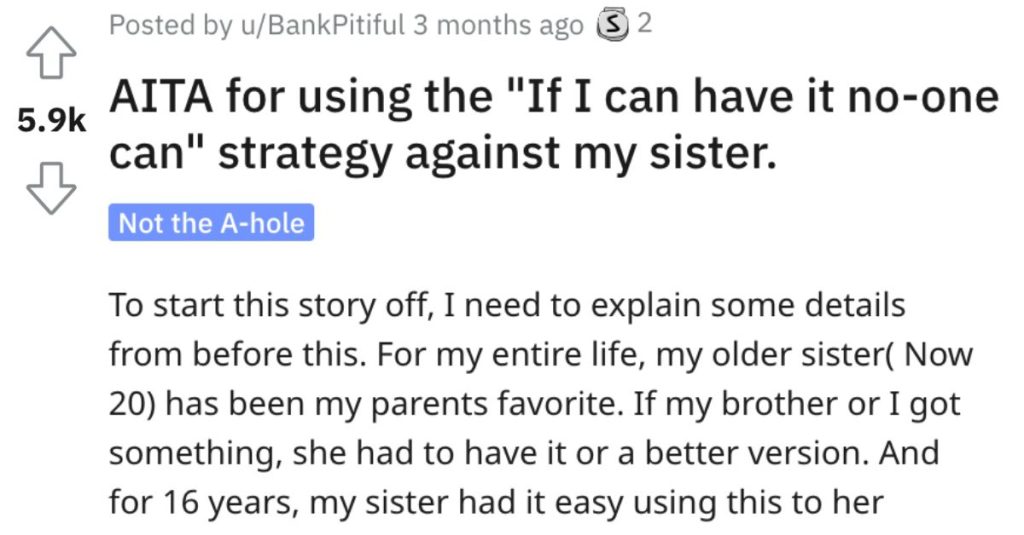 She Told Her Sister “If I Can’t Have It, No One Can.” Was She Wrong?

Well, this does not sound like a great situation, now does it?

But there’s one thing you should know about Reddit’s “Am I the A**hole?” page: you get to see the good, the bad, and the ugly!

So check this story out and see if you think this woman was out of line for how she acted toward her sister.

AITA for using the “If I can’t have it no-one can” strategy against my sister?

“To start this story off, I need to explain some details from before this. For my entire life, my older sister( Now 20) has been my parents favorite.

If my brother or I got something, she had to have it or a better version. And for 16 years, my sister had it easy using this to her advantage. Until when I was 16, and a huge family fight ended up in therapy sessions. My parents finally figured it out that their favoritism was harming their relationship with my brother and I. So they cut my sister off from the favoritism, cold turkey.

Now that reddit is up to speed on my situation, I can continue. Recently my grandpa’s big 55 inch smart tv, broke due to a power surge. Well he asked me to help get a new one and set it up. During the install of the new tv, I saw his old tv. I then asked for it stating I can fix it and return it. My grandpa said ” If you can fix the darn thing, keep it.”.

So I did exactly that, I order the parts from eBay and replaced the boards. It works like a charm. For some reason my sister is jealous, and honestly this goes beyond jealousy. Almost obsessional, almost daily she asks to buy it off of me. It got to the point where she tried to forcibly take it and just dump cash on my desk.

Well after denying her for the 20th time. She went to my parents, attempting to get them to help her. Well they said no as well. But my sister did not stop annoying them till they caved. They offered me to buy a brand new one, all I had to do was give this one up and wait about a month until my dads bonus came in. But I didn’t want a new one.

I fixed this one, I mounted it, and I don’t want to wait a month. Then I woke up one day to the T.V. being taken out of my room and after processing it. I raised hell and threw my metal water bottle at it . Well everyone freaked out. Screaming at me as to why. And I just told them “If I can’t have it no one can”. After this I sold it on eBay along with a spare LCD screen I had for it, and enough to buy another and newer one.

Well now everyone is telling me I’m the a**hole for destroying the TV, if I was just gonna by a new one. I wasn’t going to buy a new one, I was just going to use the old one for the rest of my life. But she had to take it, and so far she hasn’t asked for the new one. So it payed off in the end.

One reader said she’s NTA and they said her sister needs to get a job. 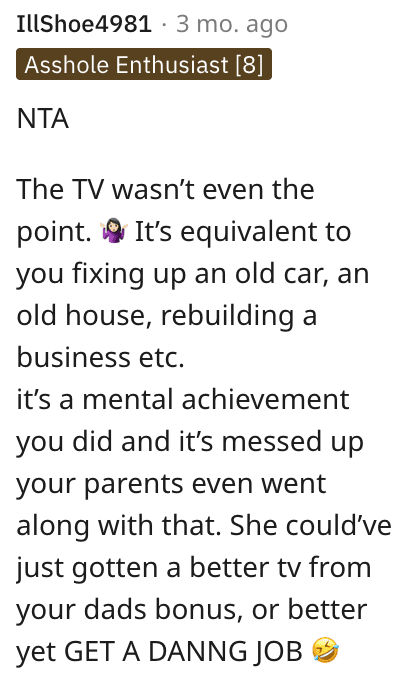 Another individual said it seems like her parents haven’t cut off her sister yet and they still put up with her BS.

And another Reddit user said that she should get a lock for her door. 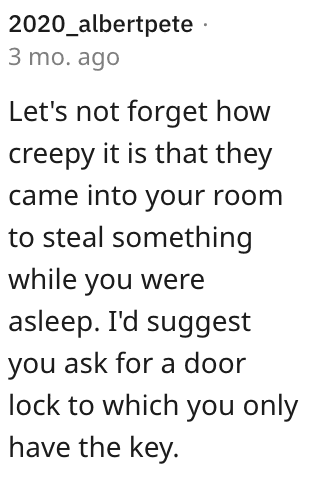