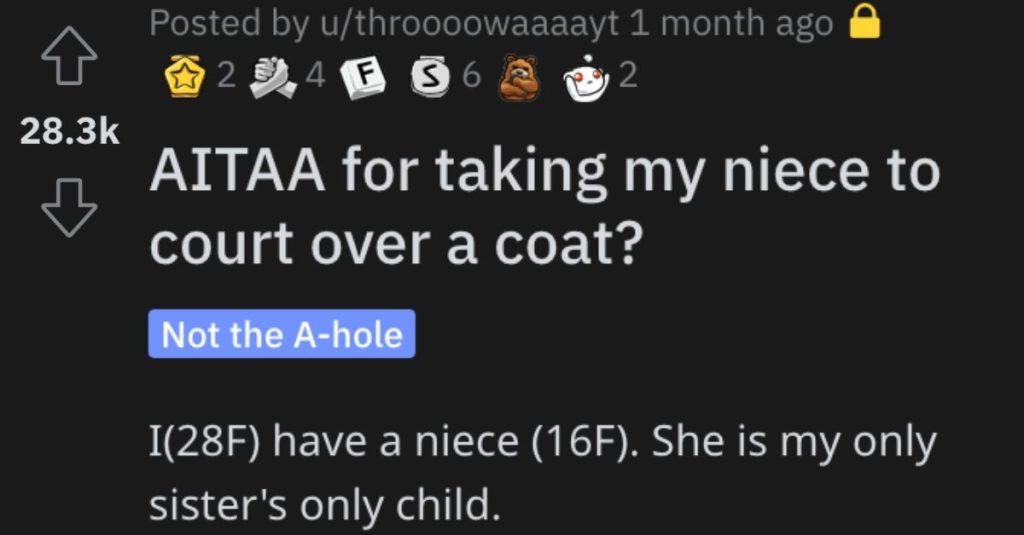 She Took Her Niece to Court Over a Coat. Did She Go Too Far?

Taking someone to court over a coat…that’s a new one!

But you never know what you’re gonna get on Reddit’s “Am I the A**hole?” page!

AITA for taking my niece to court over a coat?

2 years ago I married a very wealthy man (34M), and because of the pandemic, last Christmas was my first with my in-laws.

My MIL gifted me a coat that is worth more than $20k (I saw her wearing it, asked her where she bought it, and she said that it will be my Christmas gift from her).

I didn’t know how much it was (I knew it was expensive, but I thought maybe $3k at most). I was visiting my sister last January when my niece saw it, she googled the brand and showed me how much it really was. I won’t lie, I didn’t wear it after that because I was afraid of ruining it.

Last week, I wore it while visiting my sister. While I was putting it back on to leave, I felt something go splat on my back, then my niece started cackling and the smell of paint hit me. I was so pi**ed off while she was not apologitic at all. Her mom screamed at her and said she was grounded. Then she said she will pay for the dry cleaning.

While I was in my car, still in shock BTW, I got an alert that my niece posted a reel, it was of her doing a prank on me, and she said “I’m going to hit my aunt’s $20k coat with a paint filled balloon to see how she reacts”. I saved it on my phone, sent it to her mom and told her that a week’s grounding is not enough. She did not reply, but I saw that my niece took it down (it got less than 5 views by then).

The next day I found out my coat can not be saved, so I called my sister and told her that her daughter has to pay it back. Well, we got into an argument and she said that they will not be paying it, and if I wanted a new one, I should get my husband to buy it for me. I think that they should pay for it (they can afford to, IMO they should sell my niece’s car and pay me back my money).

We did not reach an agreement, so I told her that I will be suing, and reminded her that I have video evidence that her daughter A) did it on purpose for online clout and B) knew exactly how expensive it was.

People in my life are not objective at all, I have some calling me an AH, some saying they are the AHs for not buying me a new one, and some so obsessed with the price of the coat that they are calling me an AH for simply owning it and wanting a new one.

One person said she’s NTA and that this was a VERY expensive coat. 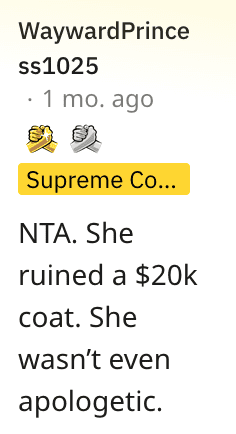 Another reader said this teenager is acting like a little kid. 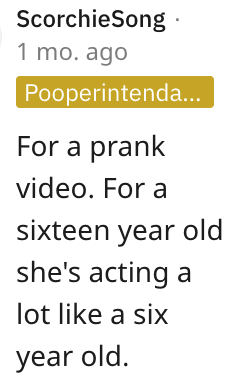 And this individual said this woman is NTA and her niece showed no remorse. 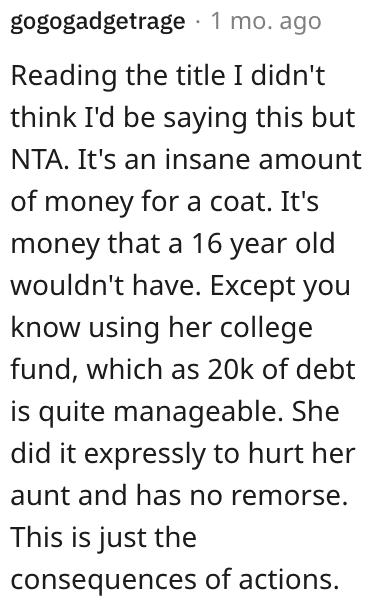