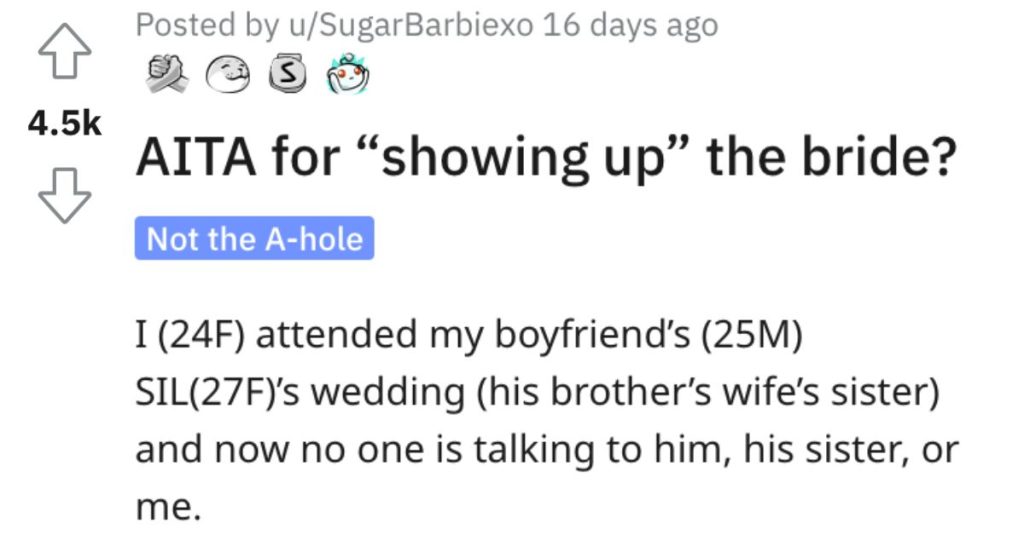 She Was Accused of Showing up the Bride at a Wedding. Was She Wrong?

Some people go crazy when they get married!

I get it. There’s a lot of stress involved and you want the whole thing to be perfect, but still…take it down a notch!

Let’s see what happened in this story from Reddit’s “Am I the A**hole?” page…

AITA for “showing up” the bride?

I just graduated college and am currently in the job market. I’m thankful enough that my boyfriend of almost 3 years offered to let me move in with him while I try to make my $13/hr internship into a livable career, but that being said I’m very strapped for cash.

The money I do have goes to student loan payments and groceries while he takes care of the rest. I met his in-laws about 2 years ago at his brother’s wedding and it seemed like we all hit it off.

I guess for context I should say they are all white and I am Indian.

I had a year to save money for a new dress when we got the save the dates, but it seemed like such a waste of money. I was still a full time student and the money I made went to all my bills. I decided to just wear one of my old lehenga which is very very simple. It’s a pale blue with a gold design. I didn’t wear bangles or a nath, just the outfit, a simple pair of hoop earrings, and my heels.

The ceremony was beautiful and my boyfriend and I were walking into the reception. At first I thought everyone was staring because you know, brown person at a old money New England wedding and all that, but then my boyfriend’s mom comes up and asks what I’m wearing. She then says the bride is sobbing because people are talking about how pretty my dress is instead of her’s and paying more attention to me.

Honestly I didn’t know what to do. It was a black tie and everyone was dressed very nicely and the bride looked stunning. The only difference was I wasn’t in western wear. I asked what she wanted me to do and she asked if I had any other dresses. Other than more dressy lehengas or summer dresses it was a no. I just offered to go home if she was that uncomfortable with my being there. My boyfriend’s mom said that was a dramatic response and if I wanted to I could.

Anyways my boyfriend wanted to leave because he didn’t want to make a scene and honestly I didn’t feel comfortable being started at. His family and in-laws aren’t talking to us and the bride demands an apology.

She apparently made a comment along the lines of “she works all the time and he pays all the bills so I don’t understand how she couldn’t have just bought a new dress.” His sister is the only one on my side saying they’re being intolerant of my culture and even if I was in a evening dress people would have still talked about me.

I feel awful and want to apologize, but my boyfriend said it wasn’t my fault and the families are overreacting. I don’t agree with him. It’s a special day for the bride and maybe I should have asked to borrow a western style dress from one of my friends? Should I have tried to blend in to their culture more? I also dont want my boyfriend and his sister to lose their family over this.

This person said she’s NTA and that the closed-minded people at the wedding were. 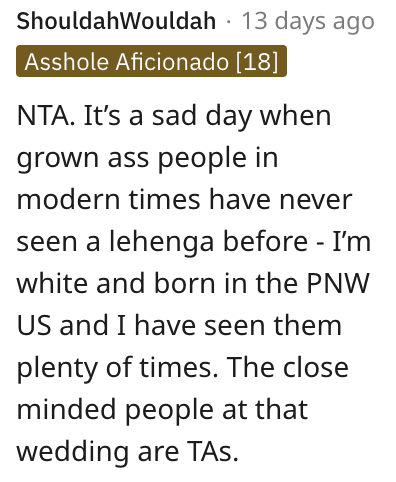 And this individual said there’s no way this woman’s outfit outshone the bride’s. 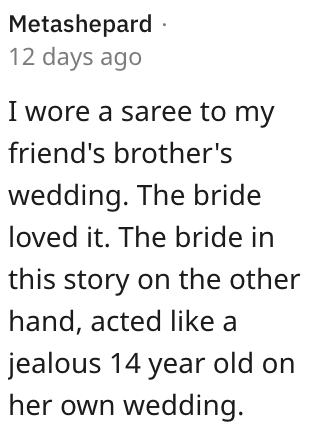