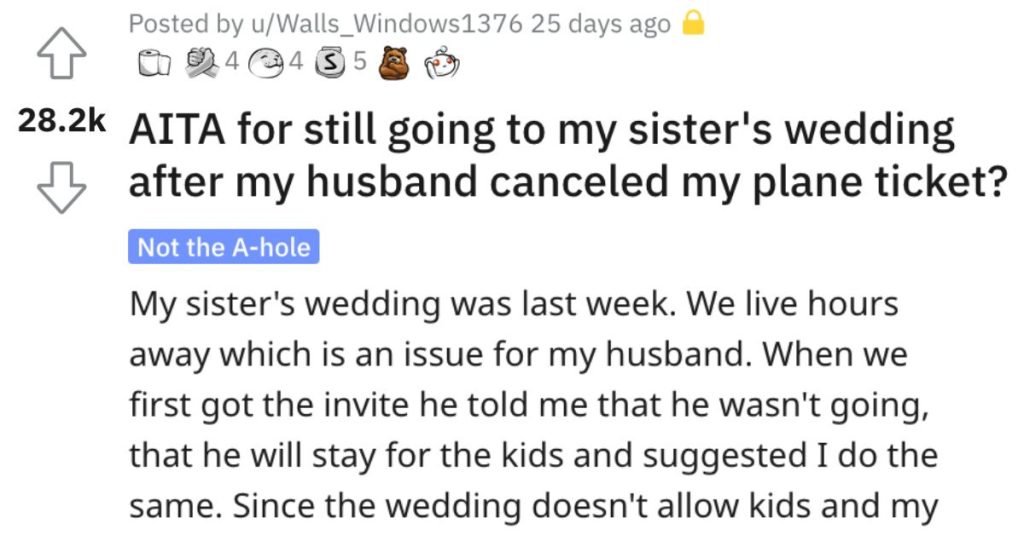 She Went to Her Sister’s Wedding After Her Husband Canceled Her Plane Ticket. Was She Wrong?

Man…the husband in this story sounds like a real jerk…

But that’s just my opinion!

Read the story below that appeared on Reddit’s “Am I the A**hole?” page and tell us if you think this woman was wrong for going to her sister’s wedding against her husband’s wishes.

AITA for still going to my sister’s wedding after my husband canceled my plane ticket?

My sister’s wedding was last week. We live hours away which is an issue for my husband. When we first got the invite he told me that he wasn’t going, that he will stay for the kids and suggested I do the same. Since the wedding doesn’t allow kids and my husband doesn’t want to hire a babysitter after the one we had robbed us.

We had gone back and forth on this. but I insisted on going since that’s my only sister and I want to attend what might be a once in a lifetime event for her. He chuckled at my statemtment then we stopped talking about it.

As the wedding was appraoching, He brought it up and told me to miss it and stay with the kids. I suggested that since no babysitters were allowed then, I could get my friend to stay with the kids but he refused. I ignored him, spoke to my friend who agreed to watch the kids and booked a ticket to travel to my sister’s town in time.

My husband found out and went on about how he had work, and that the most logical solution is that I stay home with the kids and let him make his living. I told him that I already took care of the kids and they’ll stay with my friend. Honestly? I grew inpatient.

The day of my flight I dropped the kids off at my friend’s place then headed to the airport. I found out he had canceled my plane ticket. I was upset but still insisted on going so I went home and got into my car and drove 4hrs to get to the town.

At 5pm. My husband called and was freaking out on me asking where I was. I told him I made it to my sister’s town and he blew up saying I wasn’t supposed to go, even said he canceled my ticket to get me to stay. He demanded I return but I said not until the wedding was over.

He called me horrible, neglectful mom then had his mom scold me and accuse me of abandoning my own kids. There was a huge argument ensued when I returned home and my husband kept on saying I was horrible to leave the kids and to ignore him like that and do what I wanted eventually.

He’s giving me silent treatment as of now and I can no longer take it. I felt guilty and did NOT enjoy the wedding AT ALL.

Was I wrong for still going?”

One person said she’s NTA and that she’s being controlled by her husband. 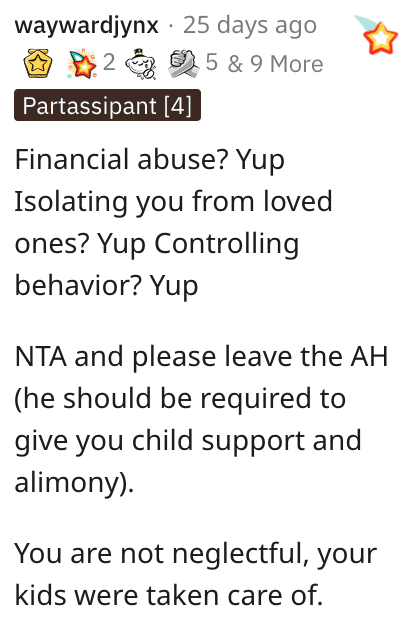 Another individual said she needs to get a lawyer and make her own life decisions. 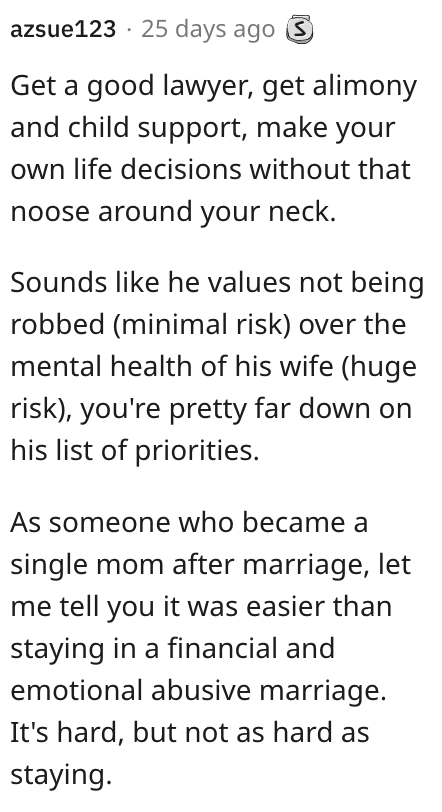 And this Reddit user said that it might not be easy, but she needs to divorce this guy ASAP. 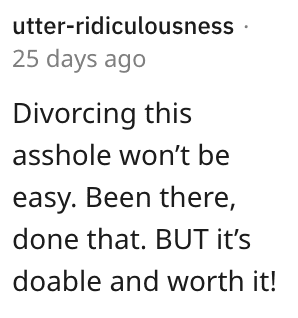