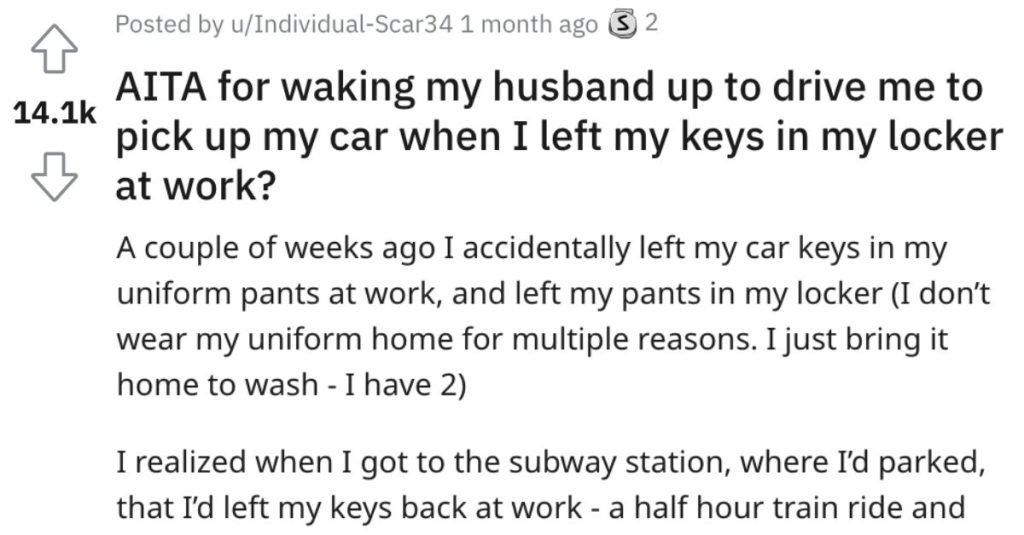 She Woke Her Husband up for a Ride After She Left Her Keys at Work. Was She a Jerk?

Do you have someone in your life who is forgetful and is always leaving things behind?

It can be maddening to deal with that all the time!

So is this woman an a**hole for waking up her husband after she left her keys at work?

AITA for waking my husband up to drive me to pick up my car when I left my keys in my locker at work?

“A couple of weeks ago I accidentally left my car keys in my uniform pants at work, and left my pants in my locker (I don’t wear my uniform home for multiple reasons. I just bring it home to wash – I have 2)

I realized when I got to the subway station, where I’d parked, that I’d left my keys back at work – a half hour train ride and no guarantee I’d be able to get back in the building (it was after midnight).

I called my husband to ask him to bring me the spare key. Twenty-two times. I tried my son, but he was asleep (he’s 19 and has a car) and didn’t wake up when I called a second time. And I tried a friend. I didn’t want to call too many people because again, it was after midnight.

I wound up taking an Uber home.

I needed to go get my car because they ticket after 2 am usually. So, when I got home, and I was pretty upset that I’d called 22 times and he hadn’t answered. I continued trying to call him the whole way home in the Uber.

When I got home, I went inside and up to the bedroom and woke him up. I was pi**ed that had this been a serious emergency, I wouldn’t have been able to get through to him.

He kept saying he had my number in his “favourites” so that if I called twice, the second time it would go through. But he had the phone on SILENT! And then put it on top of something soft. So he didn’t hear it vibrating.

He complained that I was mad at him for something I did. I replied that no, I was mad at ME for forgetting my keys. That was 100% on me.

I was mad at HIM for not having his phone on and that he’s unreliable in an emergency, which thankfully, this wasn’t a huge one.

So, AITA for waking him up and being pi**ed that I couldn’t reach him in what wasn’t a big emergency, but what if it had been?”

One person said she’s an a**hole and that her husband is right. 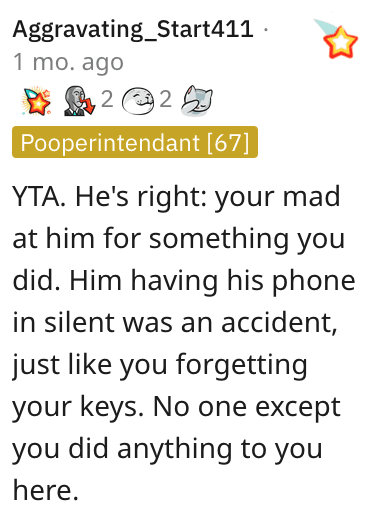 But another person said she’s NTA and that accidents and emergencies happen. 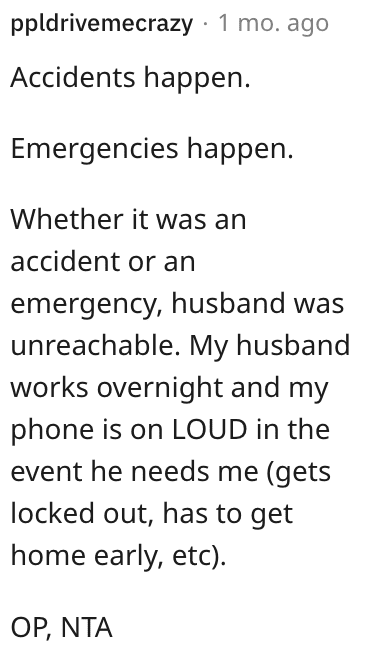 And this Reddit user said it sounds like her husband needs to figure out of a new system regarding how to handle this situation. 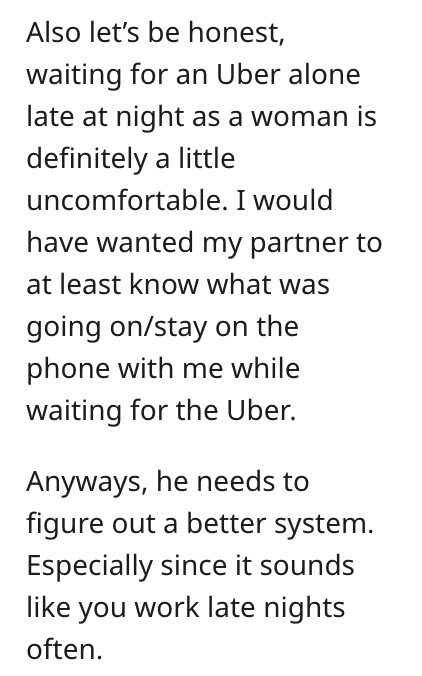