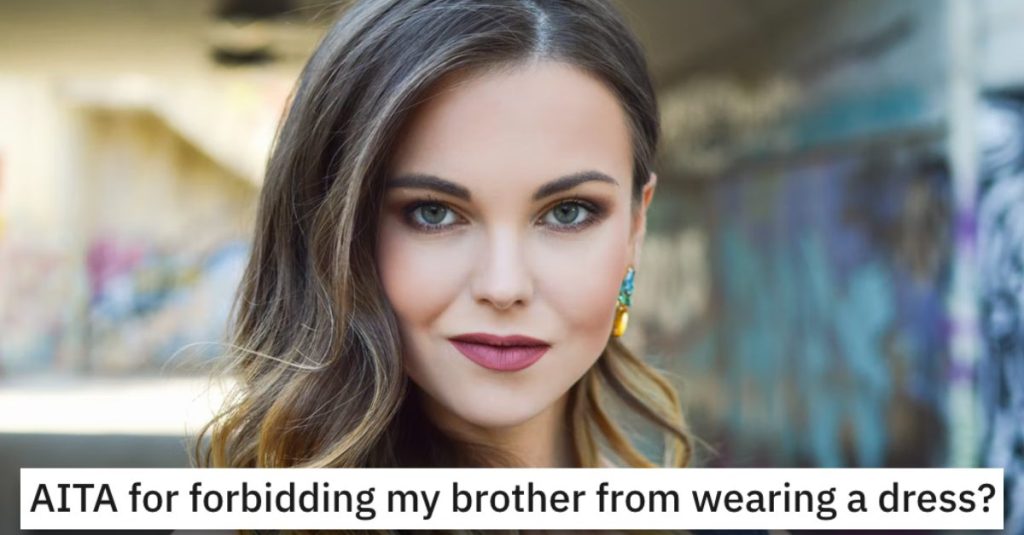 She Won’t Let Her Teenage Brother Wear a Dress to Her Wedding. Is She Wrong?

A lot of young people seem to be coming out as non-binary these days and it affects people in all different kinds of ways.

Read this story from a woman who is having some issues with her younger brother because he wants to wear a dress to her wedding.

We hope to hear from you in the comments!

AITA for forbidding my brother from wearing a dress?

My younger brother was a later in life baby and absolutely the golden child. He’s spoiled as hell and a bully to boot but he cries to my parents that everyone else is the problem and they believe him. My parents (57F and 58M) are great but they are a bit older, very naive about many things and think the sun shines out of my little brothers a** which has set the stage for this.

I love my brother but our parents are allowing him to become a coddled, disrespectful s**t. I’ve found him looking at alt right stuff online and while I don’t believe he’s that far gone yet, I am truly worried about the person he is becoming. My parents believe it’s a phase because he’s a “sweet boy”.

My brother has recently decided to “”come out”” as non binary. He is insisting on wearing a dress to the wedding.

I don’t make a habit of policing other people’s identities but it is crystal clear to me that he thinks this is a joke. Literally the ONLY time this is ever brought up is when discussing my wedding. He busts out with how he needs to wear a dress to be his true self and then laughs. Every time. He can’t even keep a straight face, he thinks it’s the funniest thing ever.

And honestly I’d say f**k it, whatever if not for one of the groomsmen, my fiances childhood neighbor and close friend James. He has very recently started his transition and still presents rather feminine which is a source of stress for him.

My brother met James at my fiance’s birthday bbq a few weeks ago and this began a few days after which is another reason I believe that this is a way for him to harass James because he thinks it’s funny. He asks why James is allowed to wear a suit and be a groomsman while my brother is not allowed to wear a dress or be a bridesmaid since they’re “the same”, again while laughing his a** off.

I am 100% sure that my brother is being a transphobic f**kwad and I am deadset on preventing him from mocking James like this. My siblings and fiance see exactly what I see (because it’s obvious) and are also not okay with this at all. My parents however… he just tells them they can’t tell him his identity (also while laughing hysterically!) and that they’re being unsupportive if they don’t let him so that made them immediately take his side

I’m threatening security to remove him if he goes through with this but that would mean turning my parents away too. One of my friends has said it shouldn’t be as big of a deal as I’m making it and he’ll only embarrass himself but I really think James would be uncomfortable.” 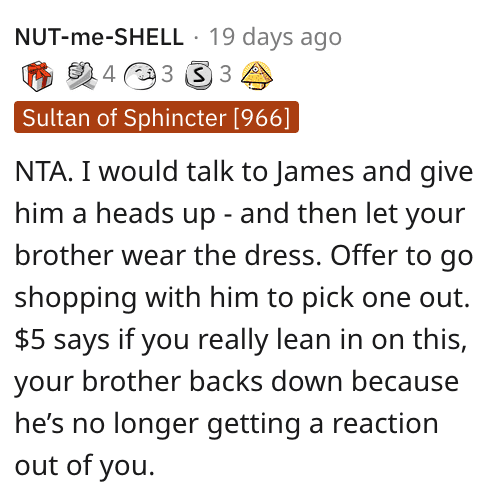 And this reader agreed and said she should lean into this idea HARD. 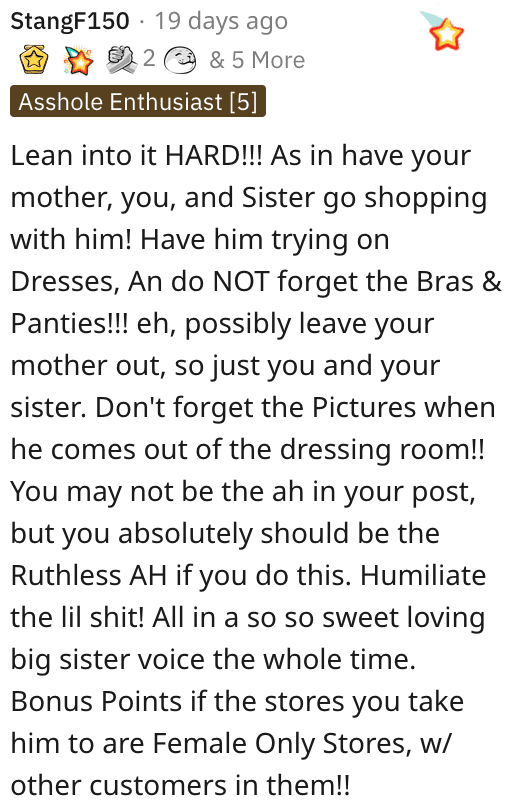 And another Reddit user said this woman is NTA and offered something that she might want to try with her brother. 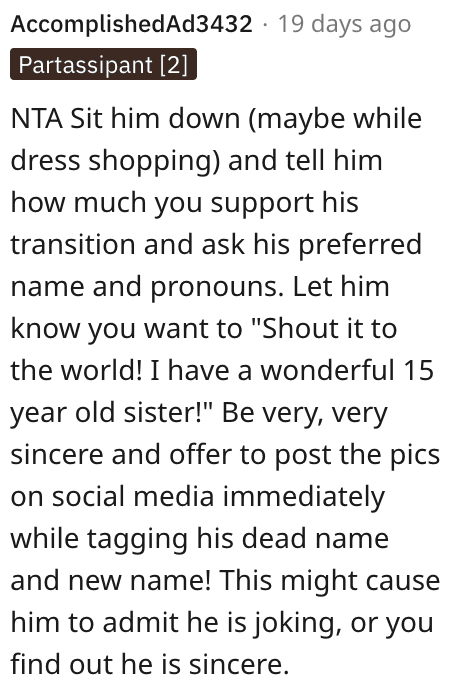