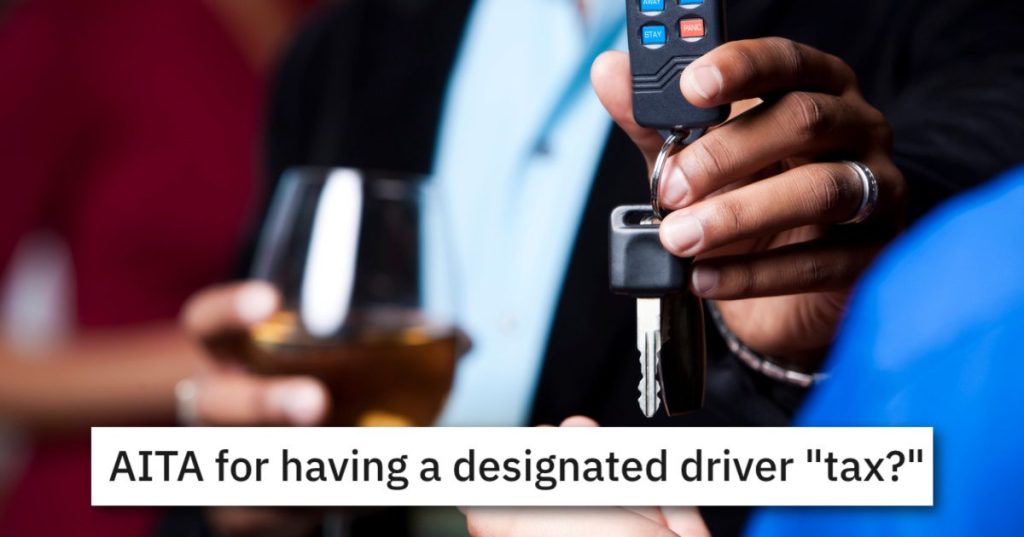 Should A Designated Driver “Tax” Be A Thing?

We all know that if we’re going out planning to have more than a drink or two, it’s a good idea to have someone lined up to make sure we get home safely. In some friend groups that might mean taking turns, but some folks also abstain for reasons of their own (that are none of our business) and will graciously offer to ferry the rest of us around.

In this case, OP doesn’t enjoy drinking or really alcohol culture much at all. If it were up to him he would typically be more comfortable staying in or hanging with his friends in a different environment.

I am not a big fan of alcohol. I don’t enjoy being around drunk people, I can only occasionally enjoy the taste. I’m not about alcohol culture really. I also have social anxiety and don’t like bar crowds (though I make exceptions for live music.)

He does often drive his friends home after a night on the town, though, and other times he even overcomes his uncomfortable feelings and spends the night hopping with them.

On those occasions, he asks them to split the cost of his dinner in exchange for the gas, the ride, and him hanging out when he’d rather not.

That said, I will happily DD for my friends if they want to go out and have a good time. I prefer it when they tell me when they want to be picked up and I can go get them later as opposed to spending the whole time with them as they get sloshed, but I can be convinced to bar hop with them on one condition: if we go out to dinner, they cover my bill.

No dinner, they are stuck covering my Cokes all night (though, I admit that I was told by a bartender friend to tell the bartender I’m a DD and I may get my drinks for free. It works sometimes!)

It doesn’t have to be a steak or something expensive. I’m not demanding anyone buy me a $50 plate nor would I do that to my friends. I just expect the ones drinking to split the cost of my usually $15-20 dinner in exchange for me spending gas (I don’t charge them for it) and time in an environment I don’t enjoy.

Though none of them have ever said a word in complaint, a new friend made a comment that this made him a jerk because it should be enough payment to know they’re all home safe.

I was laughing and explaining it to a new friend and he called me an asshole and that my payment should be my friends getting home safe. I replied that they could get home safe without me going with because I’d go get them, this is the cost for making me hang out where I’m uncomfortable. He said it’s even worse because I’m charging them to hang out with me.

Am I the Asshole for making my friends cover my dinner if I DD for them while bar hopping?

OP is now wondering whether or not he’s been a jerk all of this time, and you know Reddit is ready and willing to chime in!

The top comment says not to listen to this new “friend” – if his old friends had a problem with it, they would have said something. 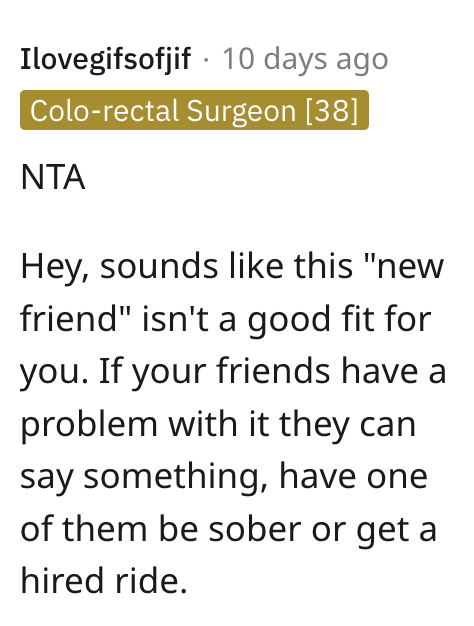 Most of us would love to have a friend like him, and would be happy to pay the “tax,” too. 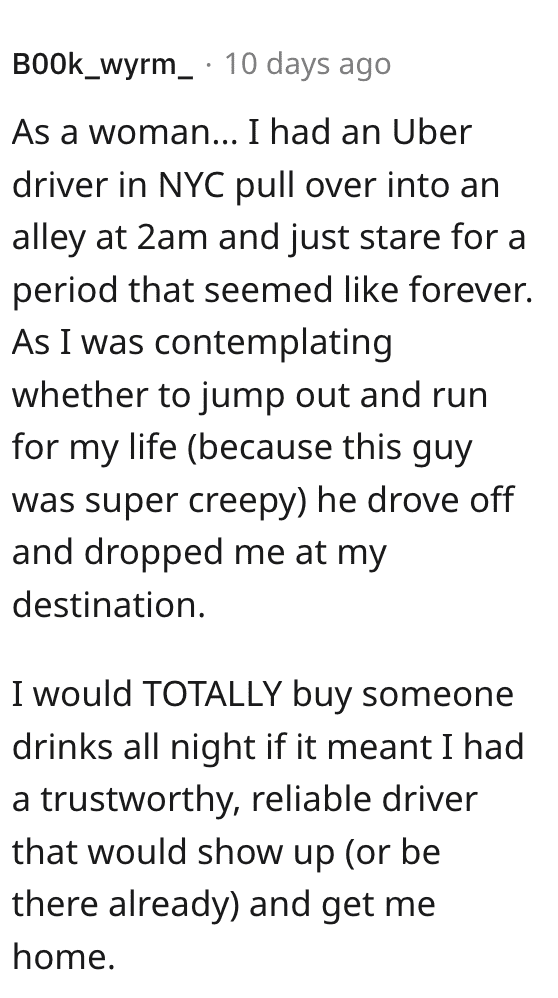 We all think he actually sounds like a great guy. 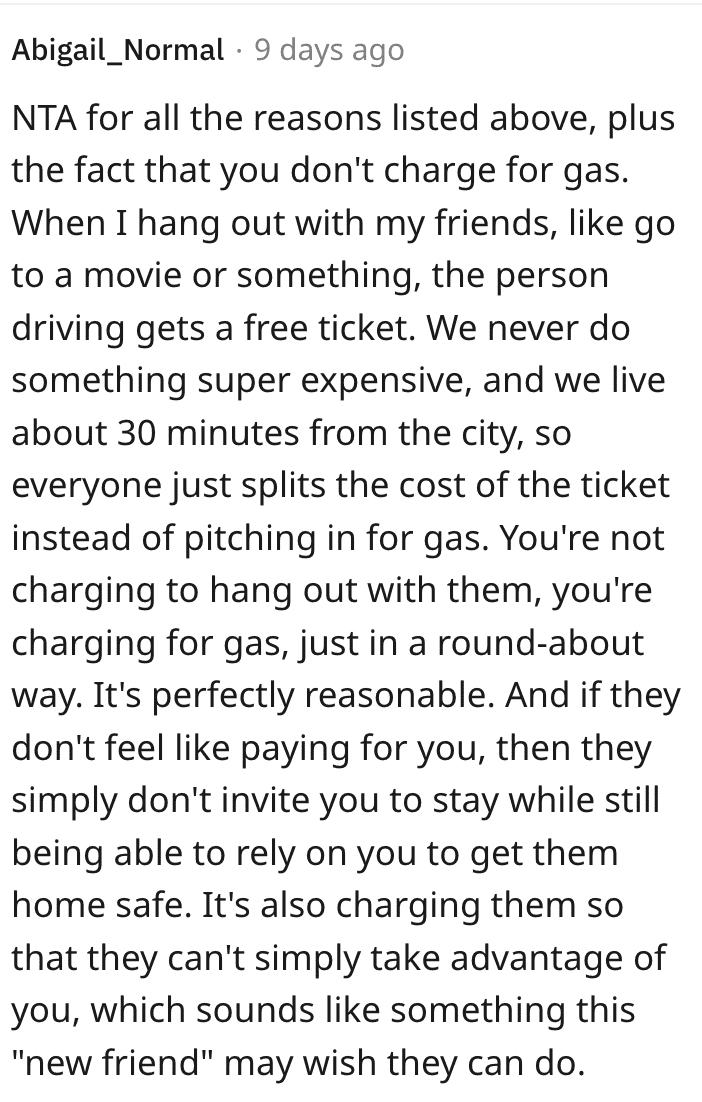 I mean seriously. Plus they like hanging out with him! 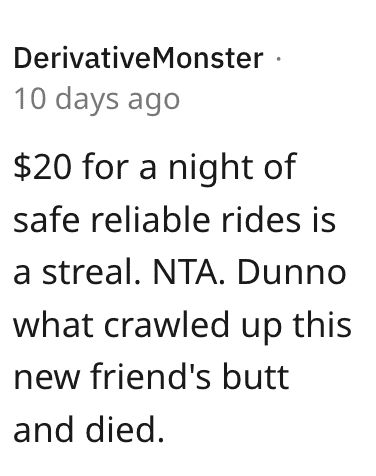 OP should be reassured after reading these comments! 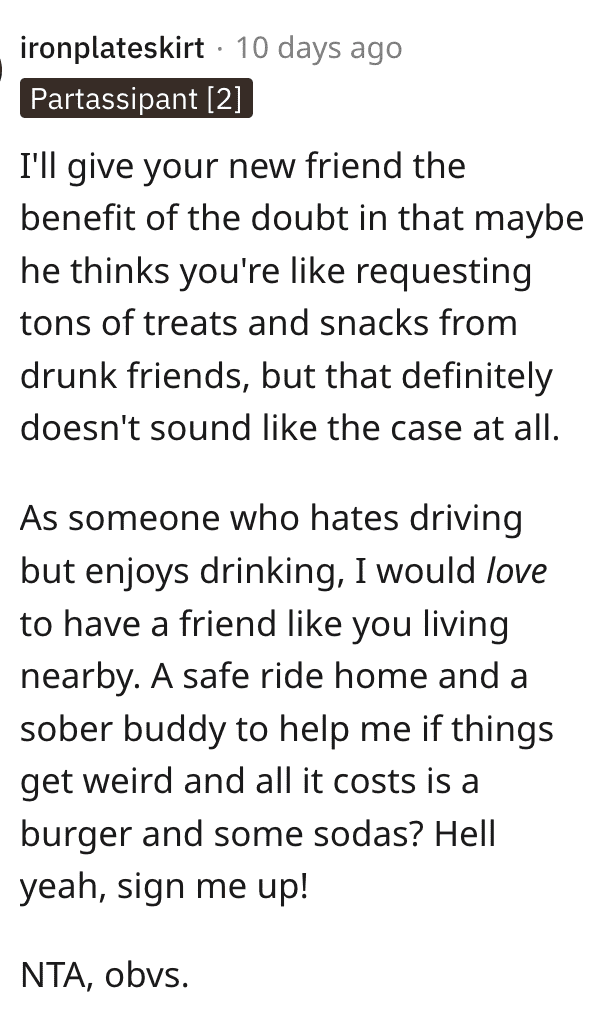 If only we could all have a friend like this to help us stay safe and happy on nights out, right?

What would you charge to be an “always” DD? Tell us in the comments!