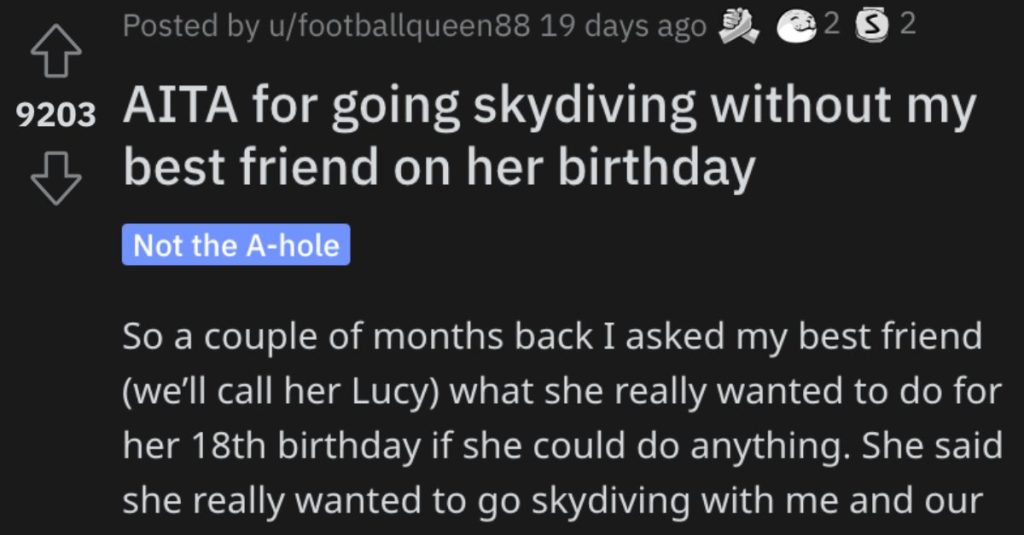 They Went Skydiving Without Their Best Friend on Her Birthday. Are They a Jerk?

How could you do this without me?!?!

Have you ever heard that one before?

I know I have…a few times…

I’m such a disappointment!

But enough about me…check out this story and see if you think this person acted like a jerk.

AITA for going skydiving without my best friend on her birthday?

“So a couple of months back I asked my best friend (we’ll call her Lucy) what she really wanted to do for her 18th birthday if she could do anything. She said she really wanted to go skydiving with me and our other friend, Rachel. Normally, I wouldn’t spend that kind of money on anyone’s birthday, but Lucy has had a rough year: she recently lost her mom due to COVID.

So I scheduled and paid for the 3 of us to go skydiving on Lucy’s birthday (which is on Saturday) way back at the beginning of March. It cost several hundred dollars not to mention that I had a whole day planned. We’d get coffee, go skydiving, I’d take Lucy out for dinner at her favorite restaurant and then we’d end the night at a hotel downtown. Rachel pitched in to pay for the dinner and the hotel.

I made sure that Lucy knew about these plans literally 2 months in advance, so that she could get the day off work. And she assured me that she had months ago. I’ve been annoying her for 2 months texting her periodically just to check that she still had that day off and remembered not to make any plans.

Well flash forward to this morning and guess f**king what: a guy that she has a crush on at work asked her to switch shifts with him and she just couldn’t say no. At first I thought she was joking, she’s like, “Can’t you just reschedule for another day? Have you already paid?”

I tell her of course I’ve already paid and it’s non-refundable this close to the actual date, and that Rachel and I had already booked a room for the hotel as well. She’s like, “Well I’m sure if you just called you could get a refund.” So I pull up the email from the skydiving company that literally says appointments are non-refundable.

She’s like, “So, what are we going to do?” I’m like well I know what Rachel and I will be doing, “we’re going skydiving with or without you. I already paid for it.” Then she had the audacity to start crying and playing the victim: “wow, I can’t believe my best friends are going skydiving and to dinner without me on MY 18th birthday. All because I had to work. Some friends you guys are. If this was your birthday and we did something without you, you’d be p**sed.”

She’s the one who decided to pick up a 12 hr shift on the one day we’d made plans months in advance. I told her to text her crush back and say never mind she can’t take the shift. To which she replied, “I can’t do that, I already told him that I would.”

Like b**ch, you told me the same thing months ago. The way I see it, she’s choosing a guy with a girlfriend in his late twenties over 2 girls she’s been friends with for 4 years.”

One reader said this person is NTA and that they shouldn’t feel bad about this. 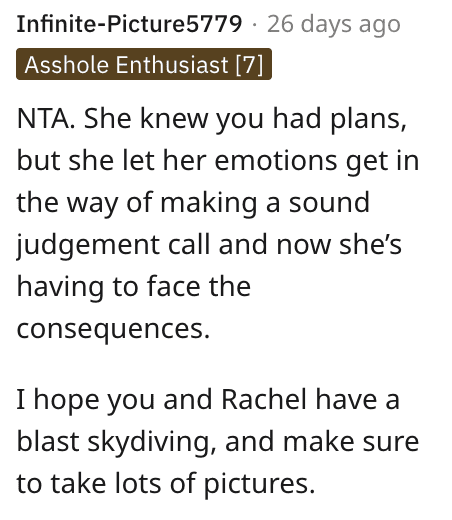 And this Reddit user said Lucy sounds like she has some poor judgement that will hurt her later. 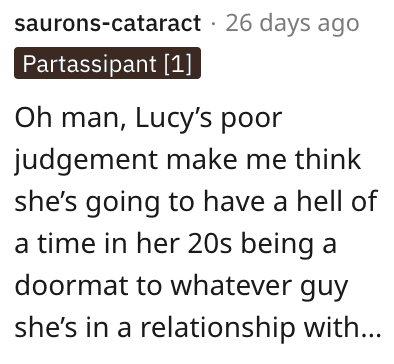 Another individual said this person is NTA and they should wait to see how Lucy reacts to see if they should still be friends with her.