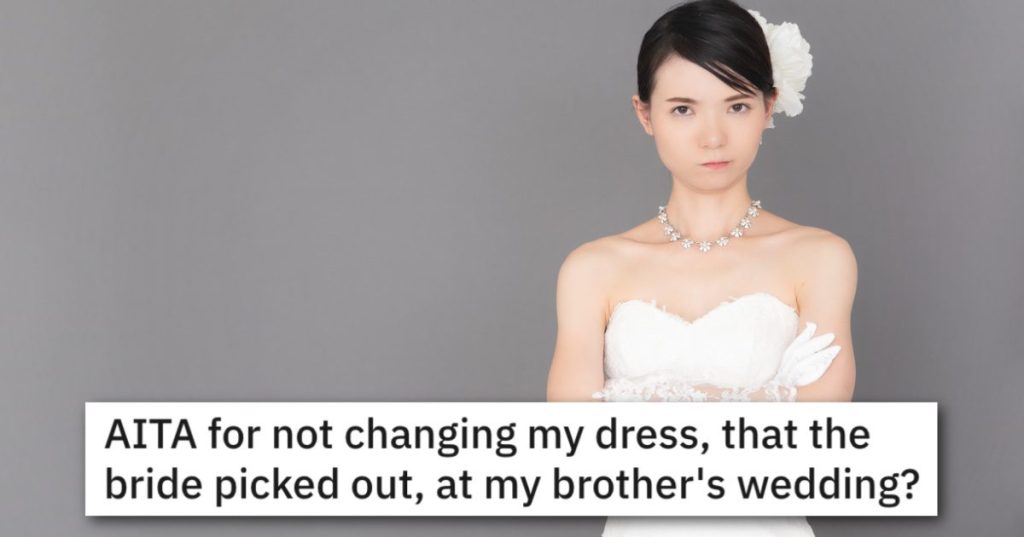 Should A Wedding Guest Have To Change Clothes At The Bride’s Request?

Most of us realize that there are some unspoken rules when it comes to attending or being part of a wedding. Some of those rules revolve around clothing (mostly for other women), like never choosing to wear white or picking an outfit that would potentially upstage the bride.

In this case, though, OP is the bride’s new sister-in-law, and the bride is the one who helped her pick the outfit to begin with.

OP has struggles with confidence and self-image, so the bride (a model) offered to help her choose an outfit that would make her feel good attending on the big day.

My (19f) brother and his (now) wife got married last month and apparently I caused an issue so disastrous that it’s being talked about a month later.

I’m not super close with my brother’s wife (Jess) but close enough that we talk sometimes. I hate wearing dresses due to personal issues, so Jess helped me pick one that was in my style and comfort. It was a dark green dress with black lace covering it and spaghetti straps.

Jess said I could wear doc martens and keep my piercings in (I only have like 5). Looking at myself all dolled up was the first time in forever that I actually liked my appearance.

It worked, because OP was feeling great about herself and her look…at least until her brother (the groom) approached and said she needed to “get changed” or leave.

Everything is fine until the reception.

My brother comes up to me and tells me I need to change. I ask why. He says Jess is upset that I’ve ‘upstaged her’. I was super confused- she picked the dress. I asked what the issue is.

Well, apparently the dress is more fitted than Jess initially realized, and was feeling insecure about her body.

OP argued that the bride looked beautiful and no one was looking at her, plus the bride is the one who helped her pick out a dress to begin with but he refused to listen to reason.

I refused to get changed. I told my brother he’s marrying a model (not that they can’t have insecurities) but that I’m sure my 5’1 180lbs self looks like a goblin next to her. He told me to get changed or leave.

I ended up sitting outside the venue with all the stoners so I had a fun time anyway.

She ended up spending the rest of the reception outside making new friends, but remains bothered (mostly because her family won’t let it go) and worried that she had done something wrong.

It’s been a month and my brother still isn’t over it. He called me selfish, even though I left. I tried to apologise to Jess, but she told me not to worry about it, but her tone also seems like she’s annoyed. The kicker is Jess’ aunt has been making comments about it online which hasn’t made things any easier.

Does Reddit think she should have done as the bride asked, or was she ok to leave and passively stand up for herself? Let’s find out!

It definitely seems as if there’s something rotten in Denmark. 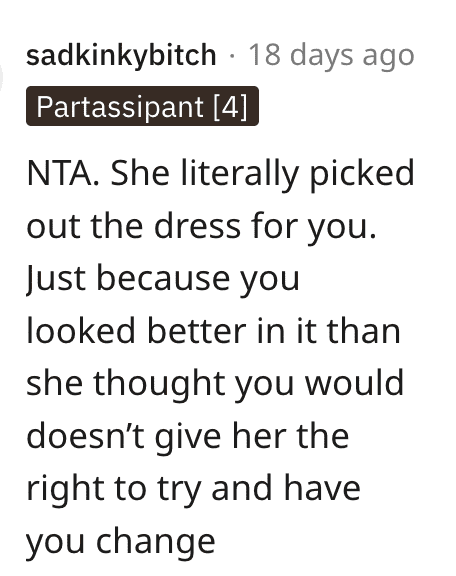 This whole situation could be a result of such a young bride and groom, but that doesn’t make it ok. 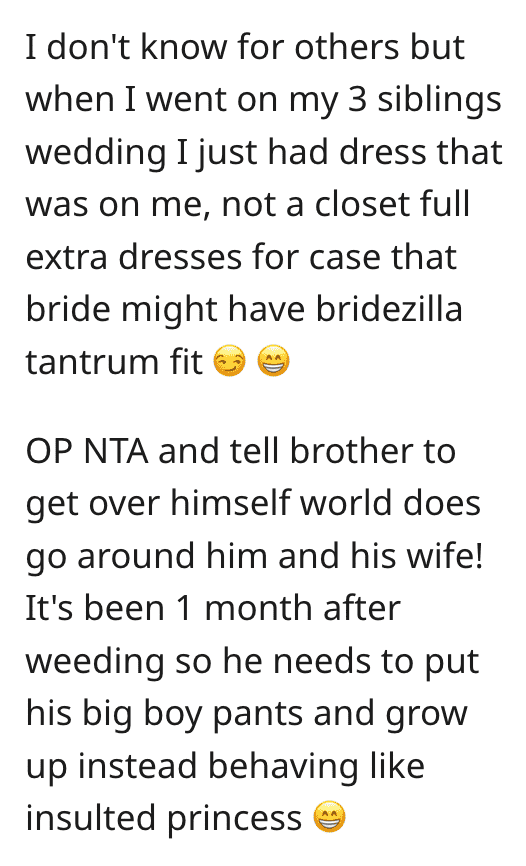 Several people commented that it seems as if the bride had a more underhanded intention the entire time. 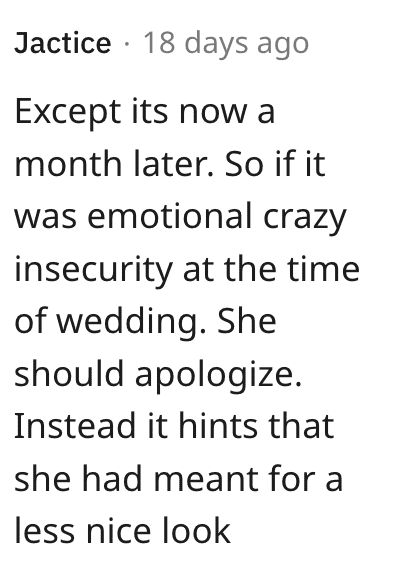 But for once, it might not be a bridezilla at play… 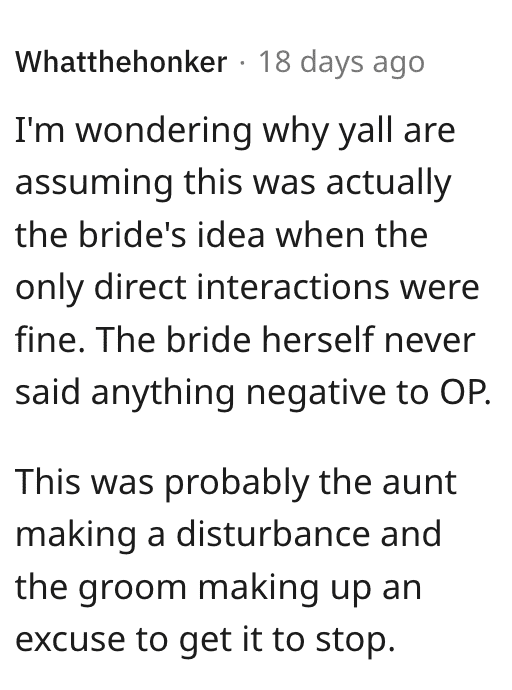 The consensus seems to be that OP definitely didn’t do anything wrong. 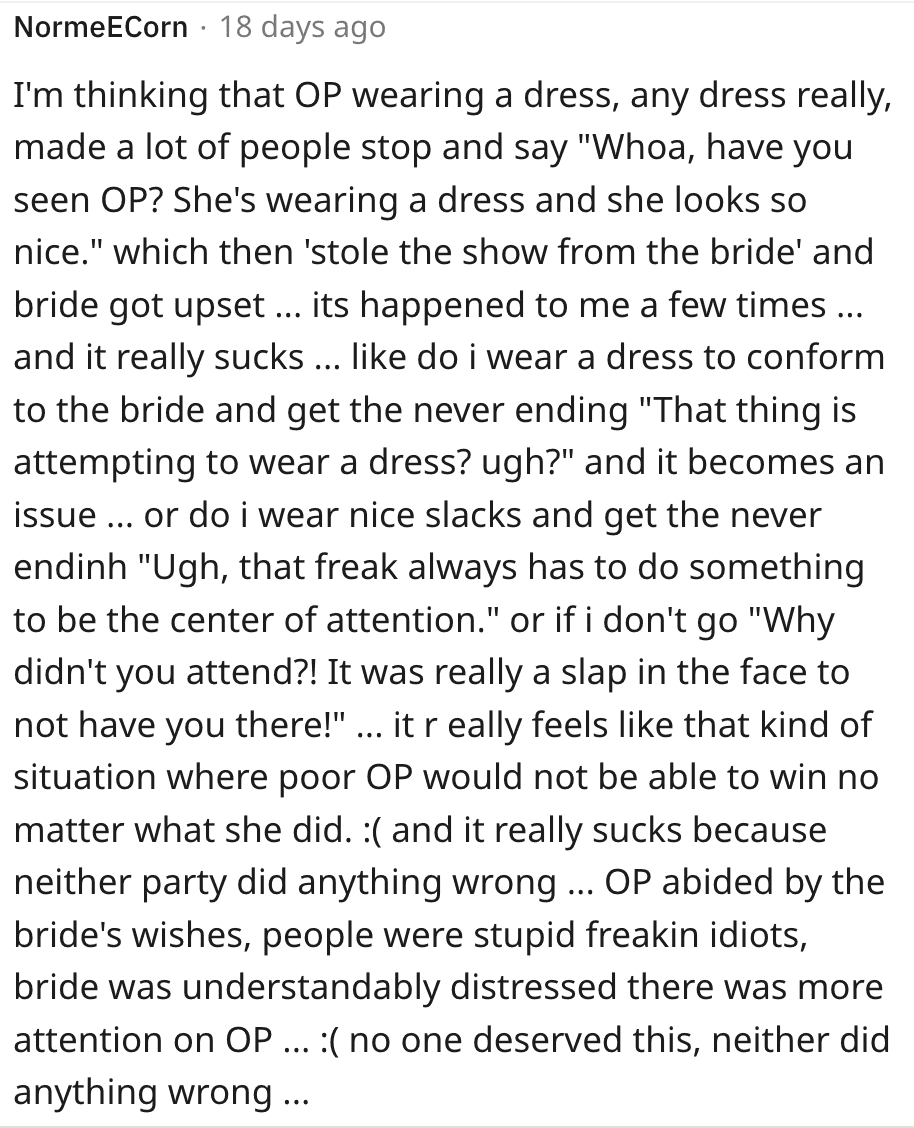 As an update, the encounter ended up having less to do with her outfit and more to do with her reaction to a member of the bride’s family hitting on her, which is disappointing to say the least.

UPDATE; mods denied my request to make a proper update so here we are.

So i figured out what the issue was; after some pretty rude prodding from a commenter, I put my dark ebony hair into a pony tail, my blue orbs sparkling in the light. I tied my beaten-up docs and I listed down everything I did and what could have been wrong. Turns out, it’s worse than what I thought.

My cousin’s boyfriend had groped me at one point and throughout the night had tried to get me to go to his car. He said he liked this new look of mine. I ended up snapping and saying ‘fuck off, asshole’ and I will admit, I pushed him away.

That’s it. THAT’s the issue that got me kicked out. Which btw, is so unfair.

I confronted my brother and Jess about it who said he (brother) was approached by my aunt who said I had pushed cousin’s boyfriend.

My brother went to confront them and overheard cousin’s boyfriend ‘insulting’ me to his friend (calling me a ‘slut’ and a ‘whore’).. Cousin said he just tried to talk to me and I told him to ‘fuck off’ and pushed him, which is true on my part, but I feel it was just.

Brother thought this was an attempt to ’cause a scene’ and so asked me to get leave (get changed).

So in short, my brother overheard two grown men using gross language against me (his sister) and decided I should leave.

As for the insecurity issue, Jess was insecure (her model brain was in overload because she has to be beautiful all the time constantly). She overheard someone compliment my outfit and started crying. Not necessarily because of me, but because she was so stressed. Brother knew she was feeling insecure and had started crying after someone made the comment towards me and so thought she was upset because of me. So he used that as the excuse to get me to leave because he thought I tried to cause a scene with cousin’s boyfriend.

That’s it. I was kicked out because I was being harassed. Going to need some time to think through all this as I was not expecting my brother to not side with me on this.

I hope this young lady has some support from other people in her life, because it seem as if her brother and sister-in-law aren’t the best at being awesome.

How would you have handled this if you were her? Tell us down in the comments!