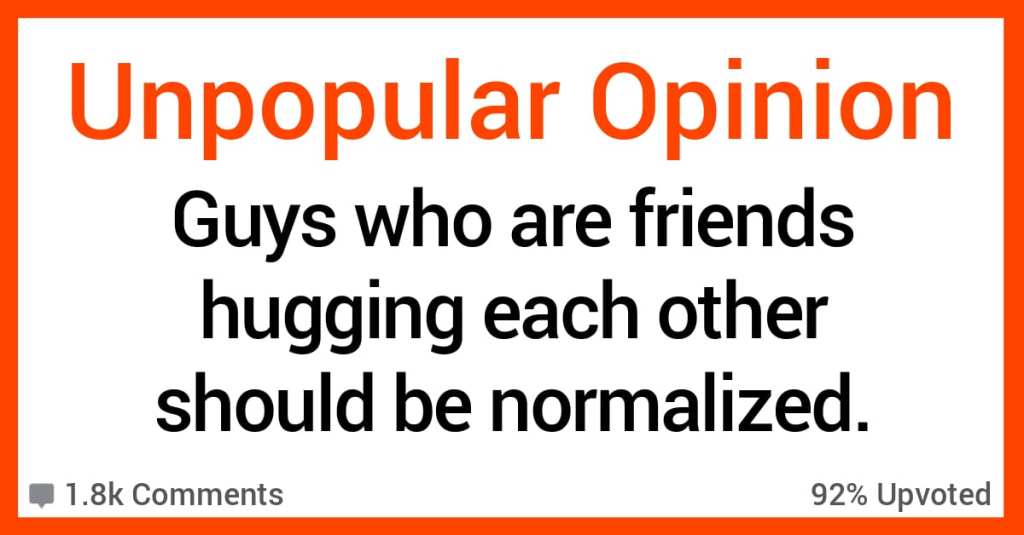 Should Guy Hugging Be Normalized? Here’s What People Had to Say.

Sure, I know that with some of my male friends, it’s just not gonna happen, but I have other guy friends who I love to give a good squeeze to!

But, as you can imagine, a lot of people think guy friends hugging is a little weird and so now everyone is cool with it.

And what about guys hugging their good girl friends?

Does this practice need to be normalized?

“Girls hug their friends every single time they meet but most guys go through many years back to back without any hugs.

This needs to be changed. I was not hugged a single time from middle school to high school until I got a GF and when we hugged for the first time, I held on to her so tight for a full 2 minutes and ended up crying.

It was the first time I had been hugged in 7 years.”

“I’ve seen men hug their bros plenty. They just have to be very close friends to do it.

They also don’t hug other men the same way they hug women. It’s more of a half-hug. Women they envelop more.”

“I hug my best friend regularly and we tell each other we love each other all the time.

The man is like my brother and he deserves to know how important he is to me and my family. I’ve known the guy for more than 25 years and we’ve been bros for pretty much all of it. We just connect as human beings.

Never be ashamed to tell the people you love that you feel that way. It’s the most human you can get.”

“My best friend and his wife just moved away for a few years. By the time they move again my family and I probably won’t be in this city either.

I don’t know when we’ll live in the same city again. I hugged the f*ck out of him. Told him and his wife I loved them during their going away party.

All of me and my friends have this kind of relationship.”

5. Different in other countries.

“Ironically, in Muslim countries, it’s common for men to hug and even hold hands while walking in public.

In India too. Men hold hands. Only those who are aware that this could be perceived differently don’t hold hands.”

“Me and my friends hug fairly regularly.

We don’t get to see each other often anymore because of life, but only s*xually repressed teenagers think it’s weird.”

“Years ago I worked for a contractor in the management office which was on one end of the state, and the CEO lived/worked on the other. Every other month, he visited our office.

He was a very friendly and sharp man. He would respectfully shake the hands of women employees, but he hugged all the men! I imagine to avoid liability, which ok, fair. No one ever complained.

BUT IT WAS THE MANLIEST HUG I’VE EVER SEEN.

To describe it: the CEO and a PM would greet each other, extend their arms, lean forward and without touching torsos, loudly pat each other on the back.

I thought it was pretty cool that he was down with hugging and did it in such a safe, albeit awkward way.”

“My friend was grieving a beloved family pet that he lost one year ago.

I hugged him. I got some weird looks.

But f*ck it. It gave him some comfort that he needed to get through the day.”

“You should stop caring about whats “normalized”?

I guarantee you its normal.

Now dont go hugging randos or you’ll get the sh*t knocked out of you.”

“I agree that physical touch among men has an agenda that should be eradicated. At the same time I actually hate the practice of hugging people conventionally for welcome and goodbye (I’m a girl so as you can imagine it happens quite often).

They’re not real hugs most of the time, they don’t give you that warmth that you described hugging your girlfriend, it takes forever when there’s lots of people and people get offended if you accidentally forget them. More so, in my friend and family groups there’s actually people I’d rather not come that close to, but you’re expected to do it when you hug others.

And I’m not coming from a pseudo-introvert standpoint where I hate touching people in general. I’d just rather reserve actual hugs for the people I wanna hug and scratch all other hugs. Once it gets automatized, it loses its value.

At the same time, for the sake of fighting toxic masculinity that might actually be the right approach”

“It really depends on the person but I think a lot of us are quite touch starved and could use a lot more casual touch in our daily lives.

The only people I ever touch are my parents pretty much. Feels pretty lonely after a while.”

12. Feeling weird about it.

“It’s still super weird to me.

I’ll get it from my partner or a half hug from my father and I’m done.”

“I’m female and hug my male friends all the time!

But I did notice that my gay/queer male friends had no problem giving/receiving affection among peers.

“I’m a woman and I hate hugs. Normalize women NOT having to hug. I had to stop communicating with a woman who would force hugs all the time, wouldn’t stop talking about it when I refused.

She made me really uncomfortable, and I explained that to her more than once, but she wouldn’t quit.

I’m not saying I’ll never hug anyone; if someone is grieving I can do it. But I’d really rather we kept our distance, and it doesn’t even have to be awkward.”

Should men hugging be normalized?

Tell us what you think in the comments. Thanks a lot!