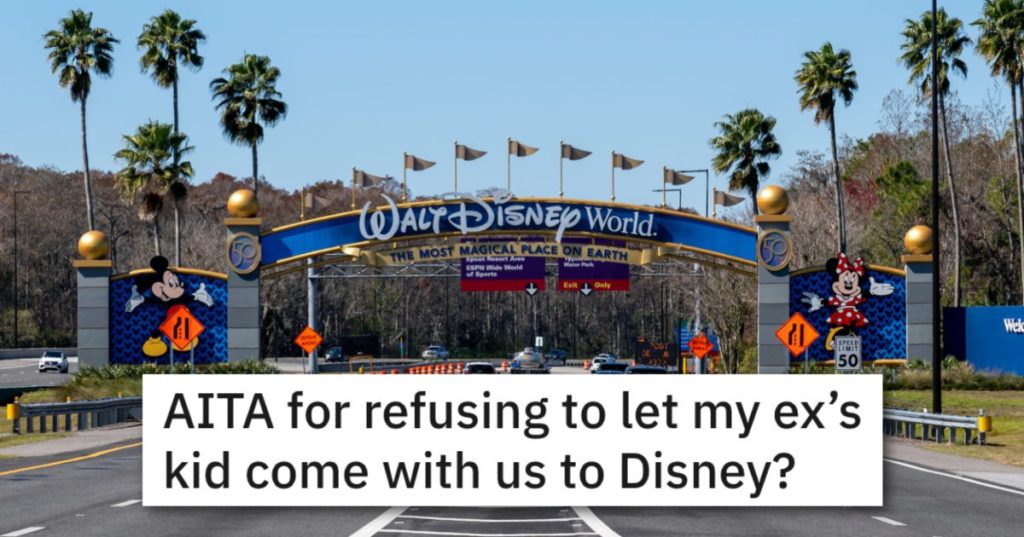 Should This Woman Give In And Take Her Ex’s Kid With Her To Disney?

Y’all, I feel like there have been a slew of posts recently on Reddit about navigating relationships with not only your ex, but your ex’s children. I think that most people want to do their best when it comes to co-parenting, because that’s what’s best for the kids.

That said, boundaries are and should be a thing.

This woman split from her ex after an affair that resulted in another child for him – a child he’s now raising on his own after his new partner split.

Their child is friendly with his child, and so OP occasionally lets him come over to hang out.

Alright, so I have a son(13M) with my ex husband. We got divorced because he was having a emotional affair which turned physical, and had a kid with the AP, and is a single dad atm as the AP left.

My son goes over to his house on weekends, and sometimes his kid comes over to my house because my son and him are somewhat friends, and I don’t really mind.

OP has planned a trip to Disney for her and her son that she’s saved up for and is looking forward to, but when her ex found out, he assumed that his son would be invited as well.

When she said no, he accused her of playing favorites (?).

The problem now is that I’m planning on taking me and my son to Disney as I’ve been saving it up for him as I believe he should go there at least once in his life to experience it, as well as him having good grades for the whole semester.

I believe that my son must’ve told his half brother, as my ex husband called me and asked me what day I’m planning to leave and am I driving or him. I was confused initially, but I realized what he was talking about, and told him that it was just gonna be a trip for me and my son.

He started to get mad and accused me of favoring my son over his half sibling and trying to be petty for his past actions, and such, and told me I should at least offered for his son to go too.

I told him no, as I wasn’t gonna pay for another plane ticket and other supplies, and that if his son wanted to go, he needed to pay for himself, I hanged up before he could say anything else.

Now he’s using their son to try to guilt and manipulate her and she’s starting to wonder whether or not she should just give in.

Now my son says that his dad was ‘disappointed’ about my decision and to go try to ‘change my mind’ so his half sibling could have fun too and some other remarks.

My ex and a few of my friends who heard about the situation say I’m TA for not letting his brother go on the trip as well and that I’m being selfish and petty, so I’m starting to reconsider everything and just relenting, so I wanted an outside opinion.

I have a feeling Reddit’s going to have some serious thoughts on this one!

The top commenter wonders how on earth this guy has managed to gaslight this OP into even posting this status instead of just laughing at him. 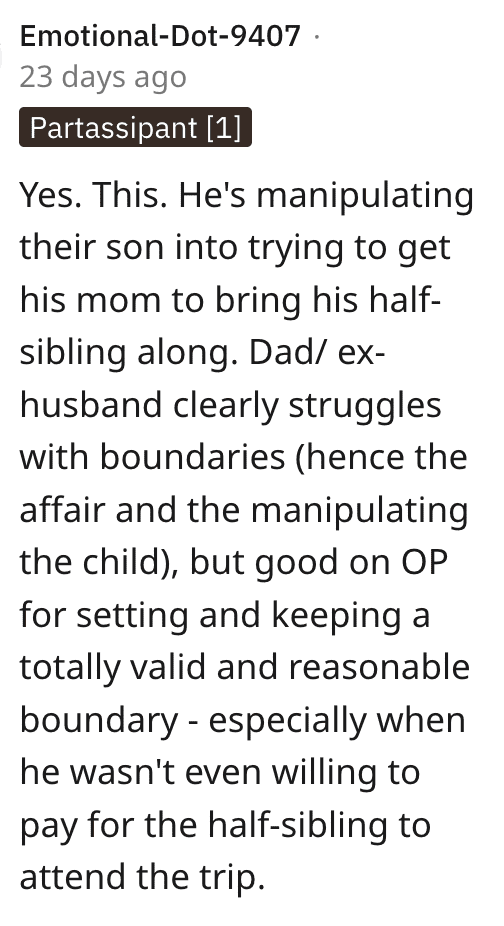 Everyone agrees that OP has already gone well above and beyond here. 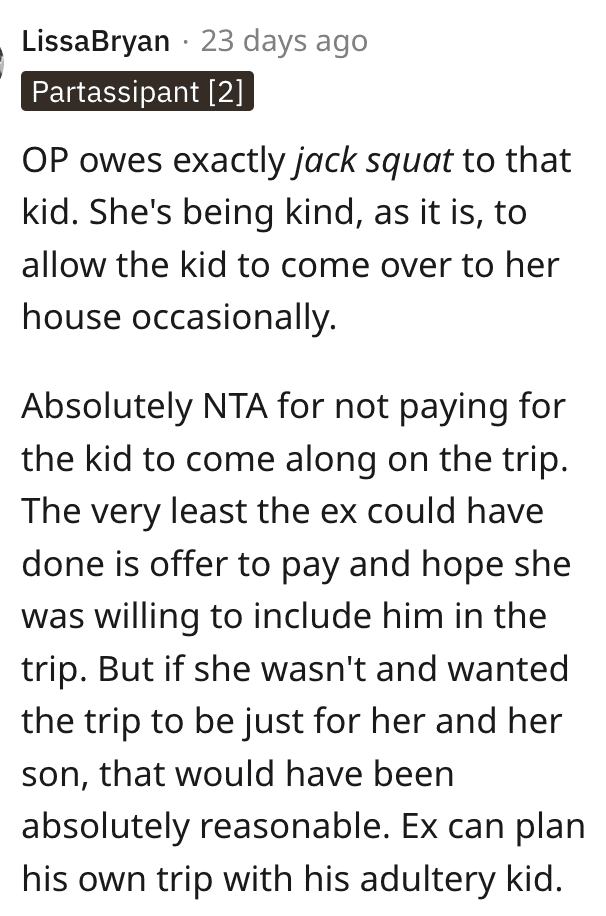 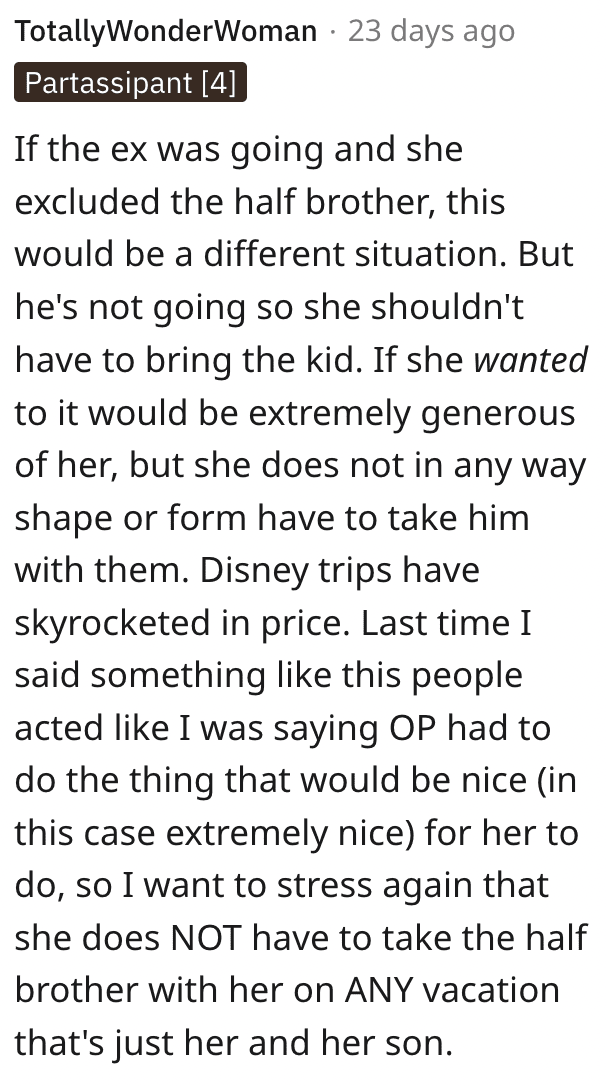 Why would he assume that anyone would bring someone else along (for free) on a vacation? 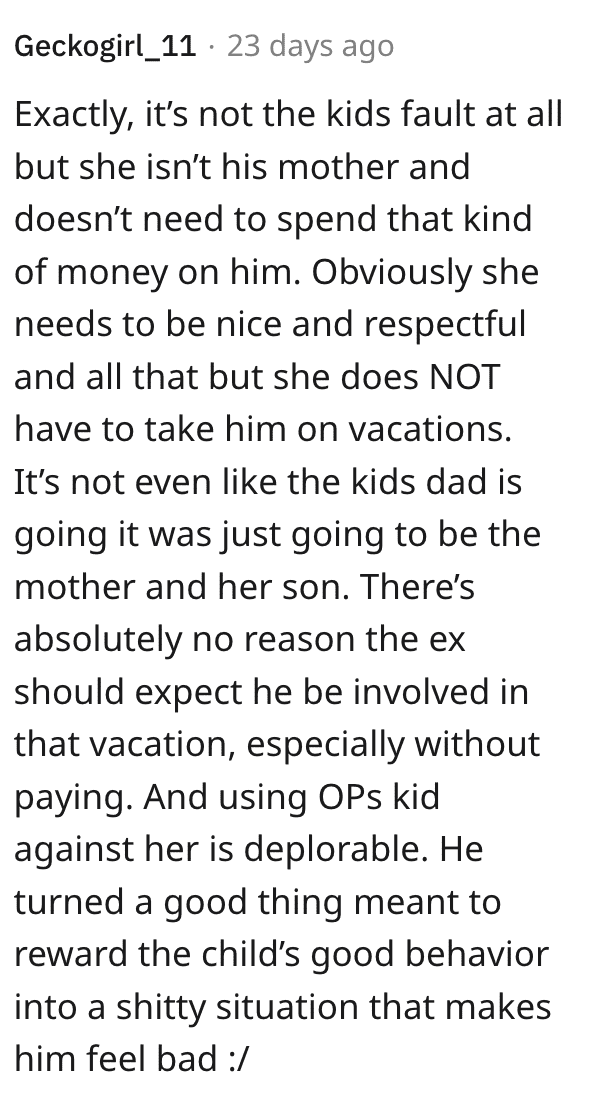 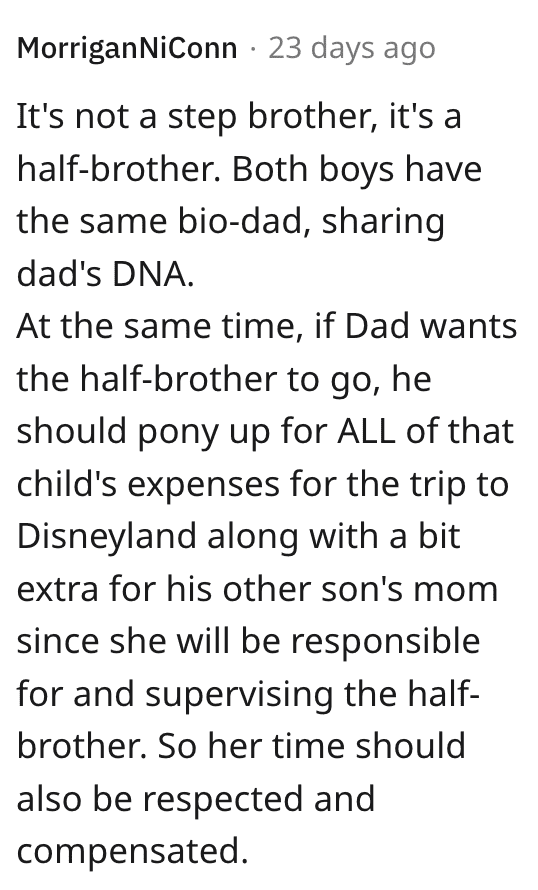 Y’all, the nerve of some people. I just cannot fathom it.

Would you have posted this or been too busy laughing? Tell us in the comments!