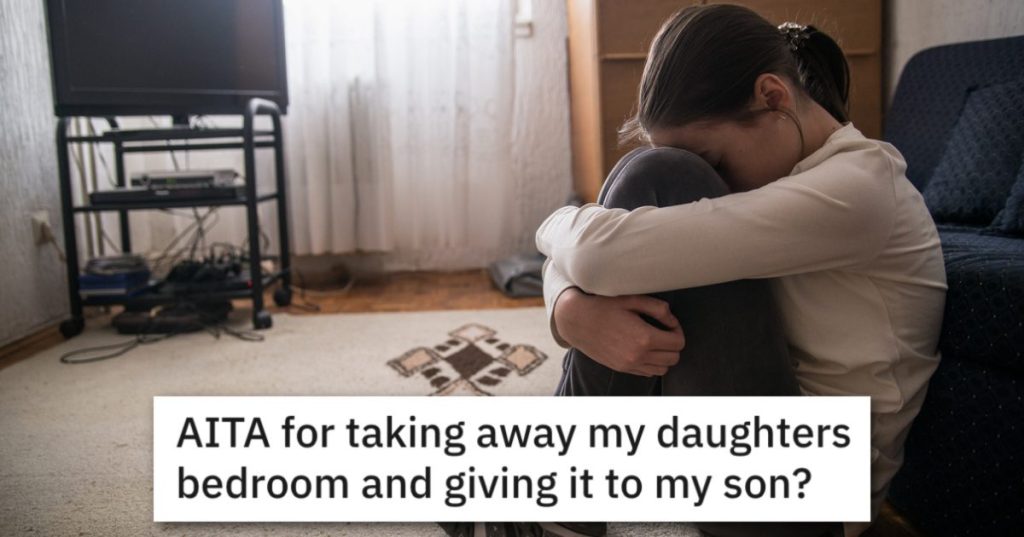 Can This Father Fix His Relationship With His Daughter After Kicking Her Out Of Her Own Room?

Blending families is hard, but there’s no doubt that the kids always get the short end of the stick. Adults are often too caught up in their own business, or struggle to relate to older kids in the ways that came easily when they were younger.

Some or all of that might apply to OP in this case, who is struggling to understand why his young teen daughter from a previous relationship (mom is not involved) is so upset after the birth of his son.

I(M32) have a daughter Harper(F14) from a previous relationship. I have full custody and her mom is not involved in her life.

5 years ago I married my wife Nina(F31) we tried to have a child but couldn’t. We went to the doctor and turned out I can’t have anymore kids due to some complications. We decided to use an sperm donor and the result was a son, Mark, who was born a few months ago.

His daughter was upset when her stepmother got pregnant, but has been even more so since her alone time with her father was completely stopped after her half-brother was born.

The problems started when Nina got pregnant. Harper wasn’t happy about it. When Mark was born things got worse.

Before this Harper and I used to spend 2 days a week together, just the 2 of us without my wife but after Mark was born I couldn’t do that anymore. I can’t just leave my wife alone for 2 days a week with a newborn and Harper has been very angry about it.

Then, OP and his wife decided to move the baby out of their room and into a nursery. Instead of choosing one of the two spare rooms, they asked the daughter to move her bedroom so the baby could be next door to their room.

The main problem started 3 days ago. Nina and I decided to make a nursery for Mark instead of having him in our bedroom for multiple reasons.

Our home has 4 bedrooms, 2 master bedrooms at one side and 2 bedrooms at the other side. One of the master rooms is ours, the other one is Harpers.

It was very hard for Nina and I to go to the other side of the home multiple times at night when Mark wakes up so I asked Harper pack her stuff and go to one of the bedrooms so that we could give her room to Mark.

She called her uncle and asked him to come and get her, and she’s been living with him and refusing to speak to her father ever since the request was made.

At first everything seemed alright. She said ok and went to her room and started packing but less than an hour later my brother showed up at our home, asking for Harper. She had called him and asked him to take her. She came out of her room with her stuff, told me “you can give it to your son now” and left with my brother.

I told her she could only go for one night but it has been 3 days and she is not back and wont even talk to me.

OP thinks that his family is just taking his daughter’s side because she was the first grandchild, etc, so he’s asking Reddit to weigh in instead.

Im receiving calls from my family all calling me an AH and other names.

I don’t trust their judgement, they very clearly favor Harper. She was the first grandchild in our family and everyone’s favorite also they are trying to accept Mark as my son but I could see that they haven’t been able yet so I decided to post here and get some unbiased opinions.

Believe me, they have some thoughts, y’all.

The first comment is pretty harsh, but I’m not sure that’s undeserved. 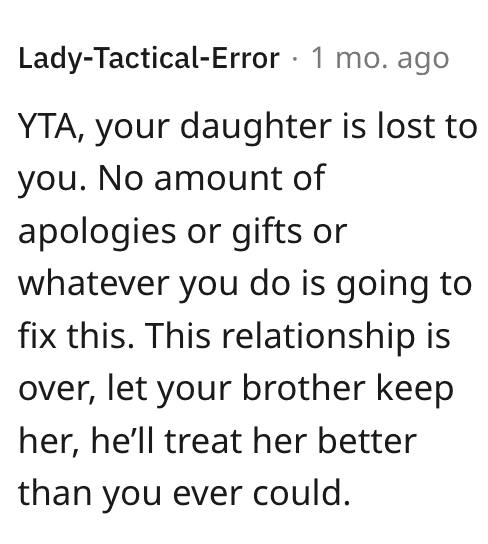 While this person somehow thinks the daughter is overreacting. 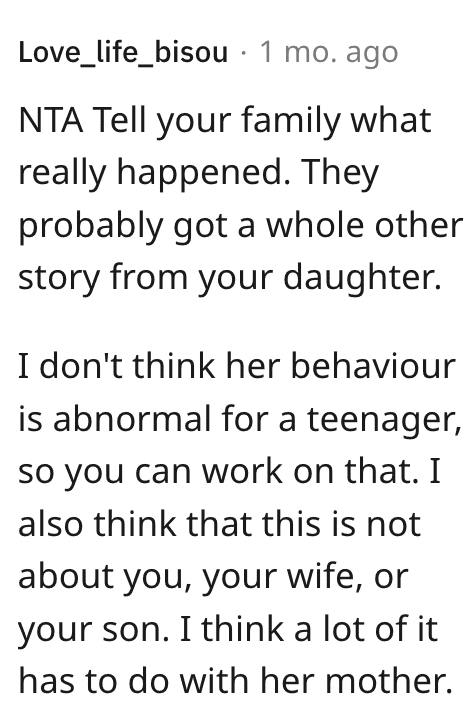 This person tells it to them straight – which is that he’s absolutely handled everything wrong so far. 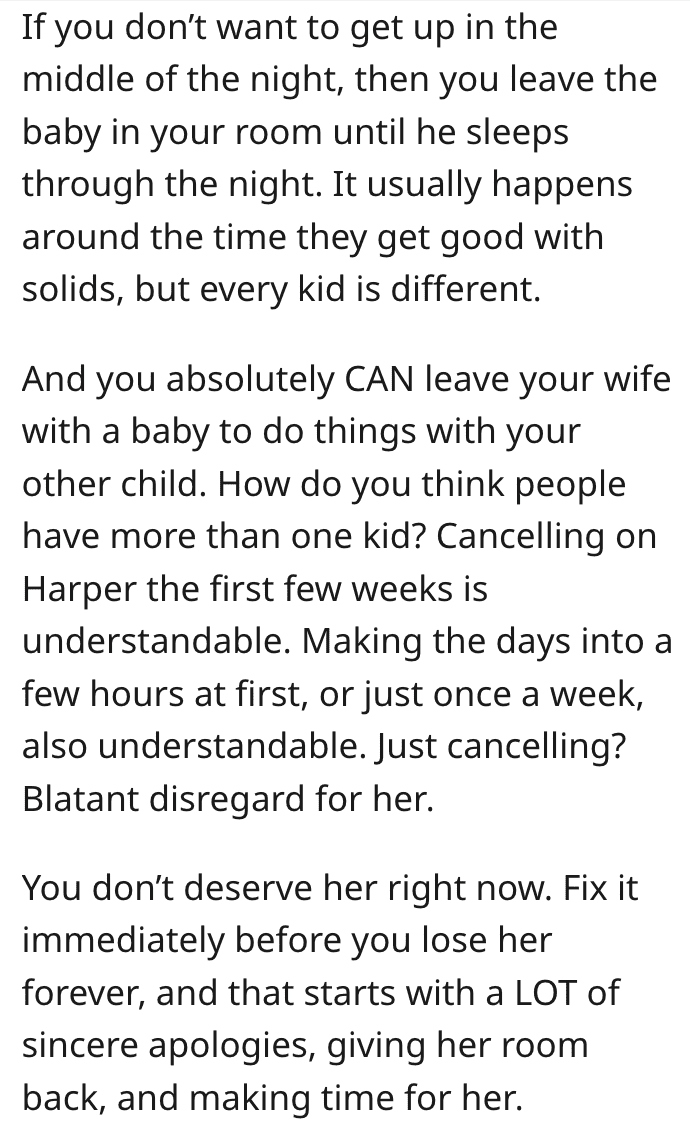 This is one of those rare cases of the teenager definitely being more mature than the parent. 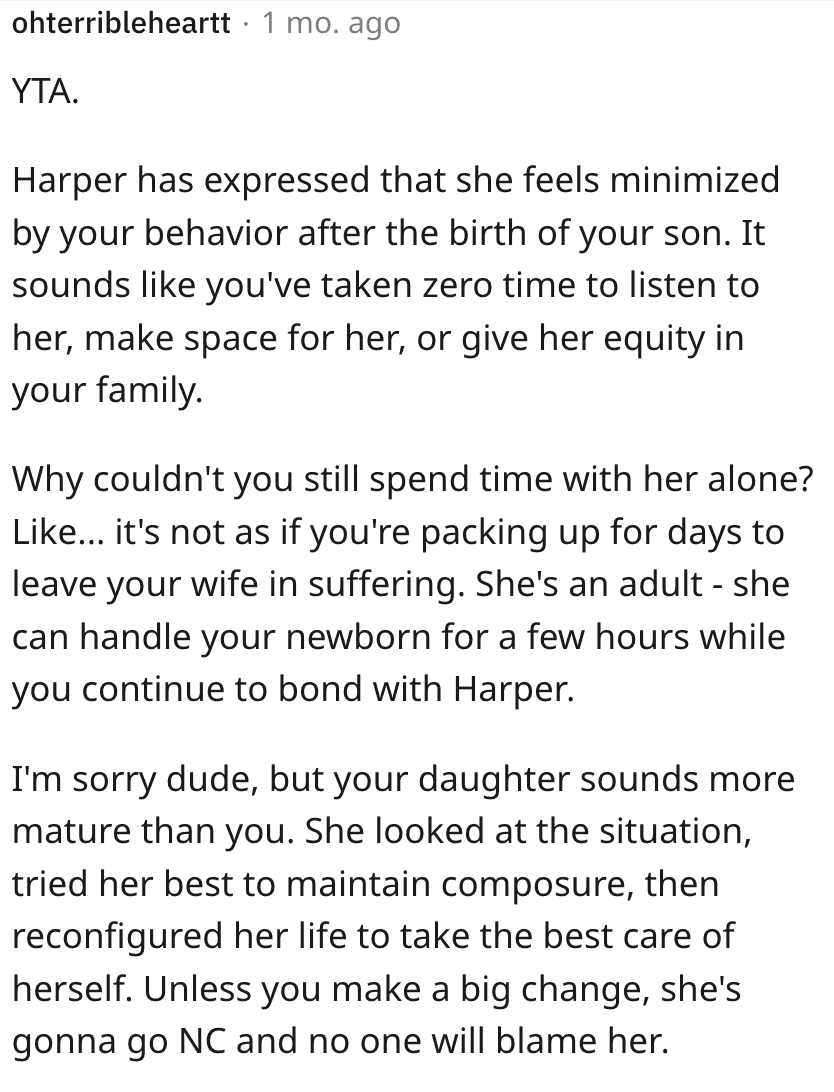 You can absolutely feel the rage through the screen. 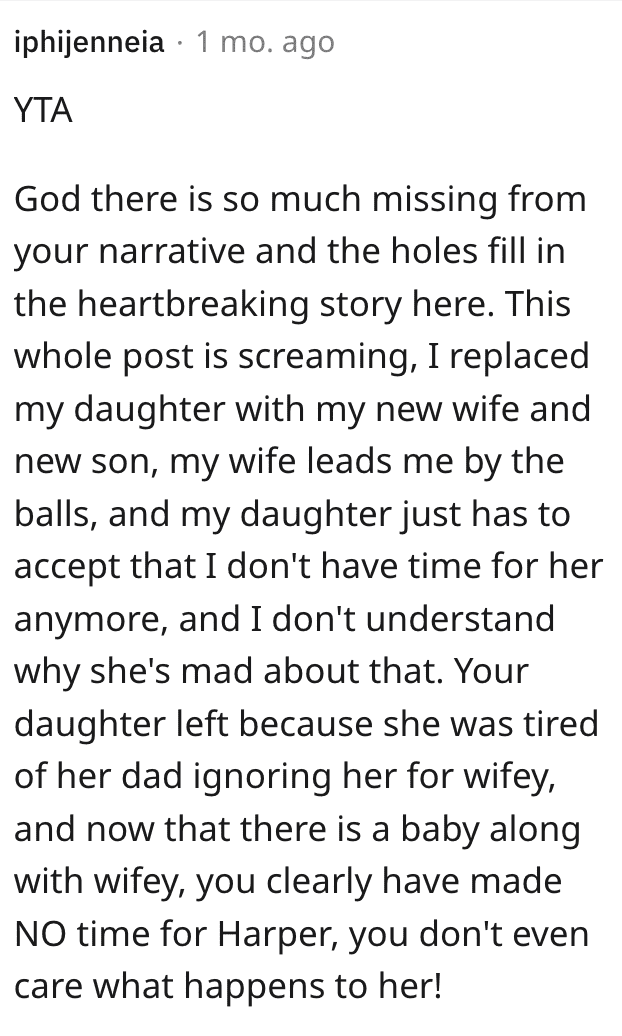 He also posed this rather lengthy update, which shows that he is desperate to repair things with his daughter – I hope it works!

Edit: Here is the update that I promised

I realized I’ve messed up so I went to my brothers home and tried to get Harper back but he didn’t even let me see her, saying she doesn’t want to see me.

He said he would only let her go back if:

This caused a lot of problems since my wife doesn’t like some of those conditions. she thinks they are not reasonable. She got angry, took Mark and went to her parents home and is staying there so now I’m also receiving texts from my in-laws calling me an AH.

I called Harper and my brother convinced her to talk to me for once. she was crying the whole time while telling me that she felt like I didn’t want her anymore. Hearing her cry like that really broke my heart. I honestly never meant to hurt her.

We have to be so careful with teenagers and communication is key.

Do you think he has a chance at fixing things here? Let us know why or why not in the comments!