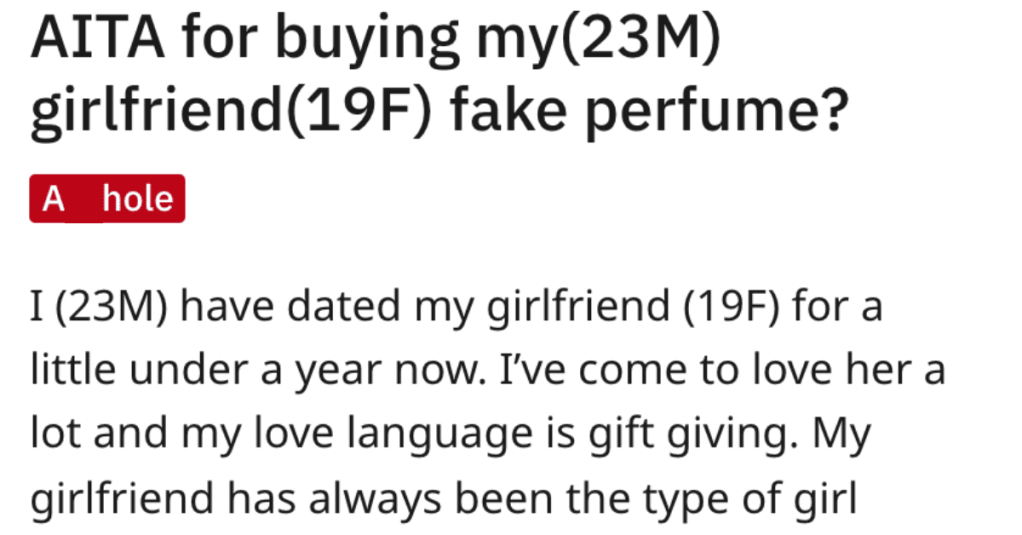 Should This Woman Have Been Thankful When Her Boyfriend Bought Her Knockoff Perfume?

Relationships are not at all easy, and there is a learning curve in general, and then with every single new one you enter into, but listen…some people are starting so far behind the 8-ball I have no idea how they will ever catch up.

Like this dude, who comes in hot with one of the most cringey descriptions of a girlfriend in the history of ever.

I (23M) have dated my girlfriend (19F) for a little under a year now. I’ve come to love her a lot and my love language is gift giving. My girlfriend has always been the type of girl that’s just hard not to love. She’s the definition of magnetic.

Guys always approach her and understandably, she’s a high caliber girl. She could easily be anyone’s dream girl. Looks amazing and everything about her is feminine, down to her hands and how she comforts me or makes me food.

She has an “expensive” look to her, but she does all her self care her self and is amazingly cost efficient about it.

He goes on to say that other guys (with money) pay her plenty of attention but he feels like she’s loyal to him.

As a result, the kinds of guys that go after her are usually trust fund babies or are highly ambitious (med school, law school, business start-ups, things like that), despite herself not being anywhere in that tax bracket.

Recently he saw her eyeing a designer perfume and jumped at the chance to show her that “he can spoil her too,” even though she protested and didn’t want him to spend the money.

Shes literally never asked me for anything but I wanted to show her that I can take care of her and spoil her too.

Which he ultimately didn’t, because when he saw how much money it was he bought her a knockoff instead.

I look into it and the perfume is 300 f**king dollars. What the f**k. I don’t see the point in something like that but honestly my pride would be hurt if I went back on my word, so I find the perfume for a much greater value on eBay.

When he gifted her the perfume, though, it didn’t exactly go as planned. She kind of had a non-reaction and just thanked him for the gift.

Today comes and I gift her the perfume. She unwraps the present, sprays it on her hand to smell it and her face is a blank expression, like shes trying to decide how to react.

I ask her what’s wrong and she gives me a hug and a kiss on the cheek, thanking me that I wanted to get her something nice. I don’t know why, but it made me feel like s*%t.

This wasn’t what he’d expected for his generous gift, and he pushed until he got her to share what was “wrong” with the gift.

And when she told him it was a nice idea but obviously fake, he leapt immediately to insulting HER for her reaction.

I was expecting a much bigger reaction. I keep pushing her as to why it seems like she doesn’t like her gift and she tells me that she loves the idea, but it’s obviously fake.

I feel like this was an extremely ungrateful thing to say and I called her a brat for even caring if the perfume is fake or not. I also said that she’s materialistic due to the fact that she could supposedly even tell it was fake by merely looking at it and smelling it once.

Now he says he’s seeing HER in a different light and wants Reddit to tell him he wasn’t in the wrong here.

She says that it’s dumb that i made a big show about getting it for her if I was just going to do this, and that what i got her is nothing like the original perfume that it couldn’t even be considered an imitation. I think it shouldn’t matter because I practically still got her the perfume she wanted, I just didn’t drop 300 for it. This is making me see her in a different light.

I don’t think he’s going to get his wish, but I am going to relish the reaming.

The top comment really hopes this account is fake, but if it’s not, OP needs to get it together. 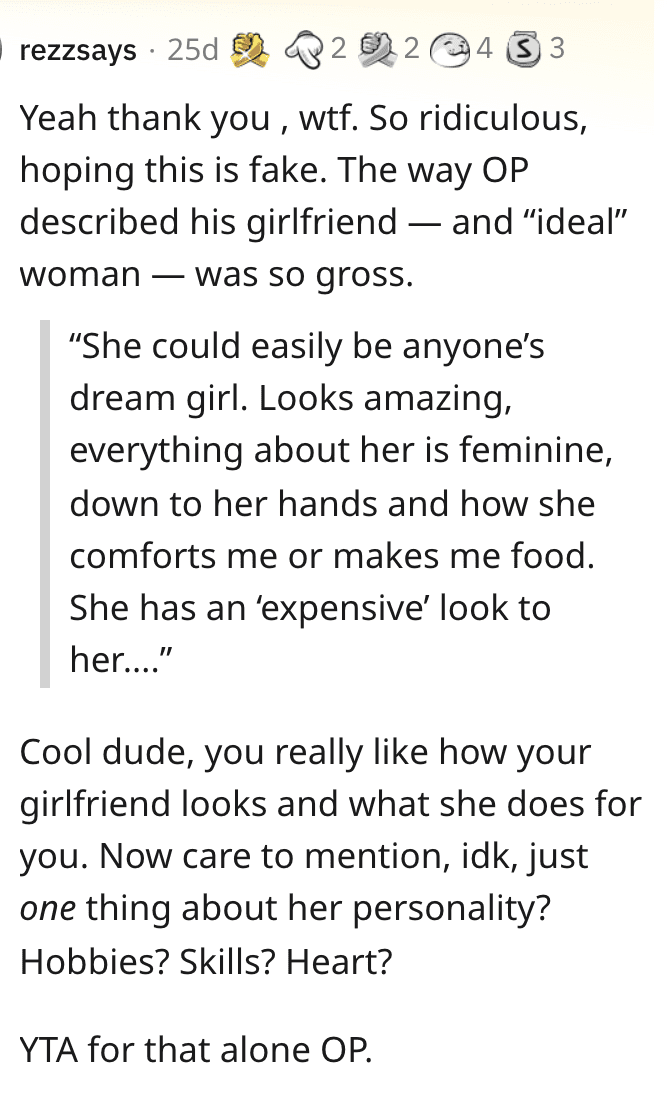 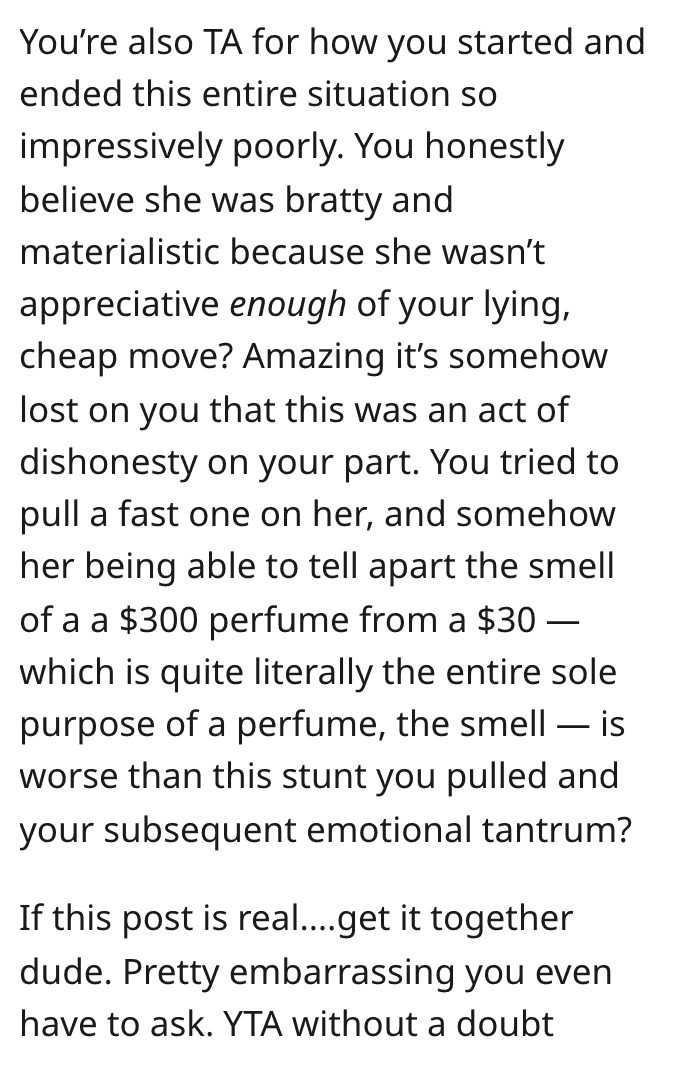 If it is real (and maybe even if it’s not) she’s clearly too good for him (and not because she can smell fake perfume). 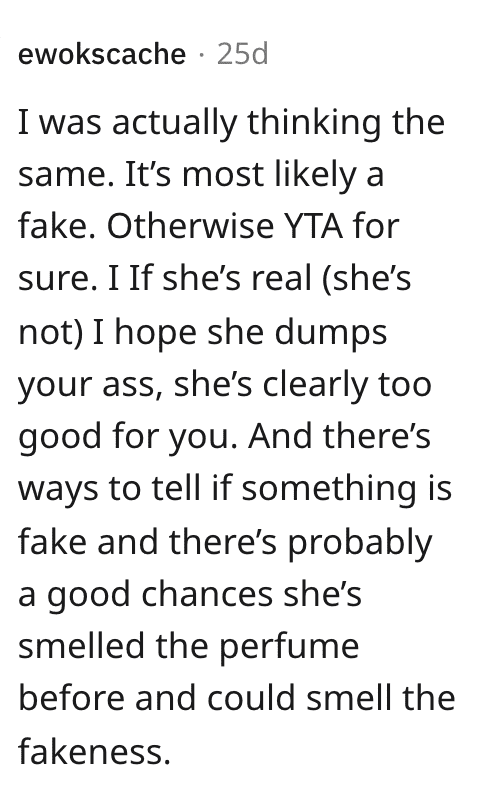 OP most definitely does not get the irony. It’s way over his head. 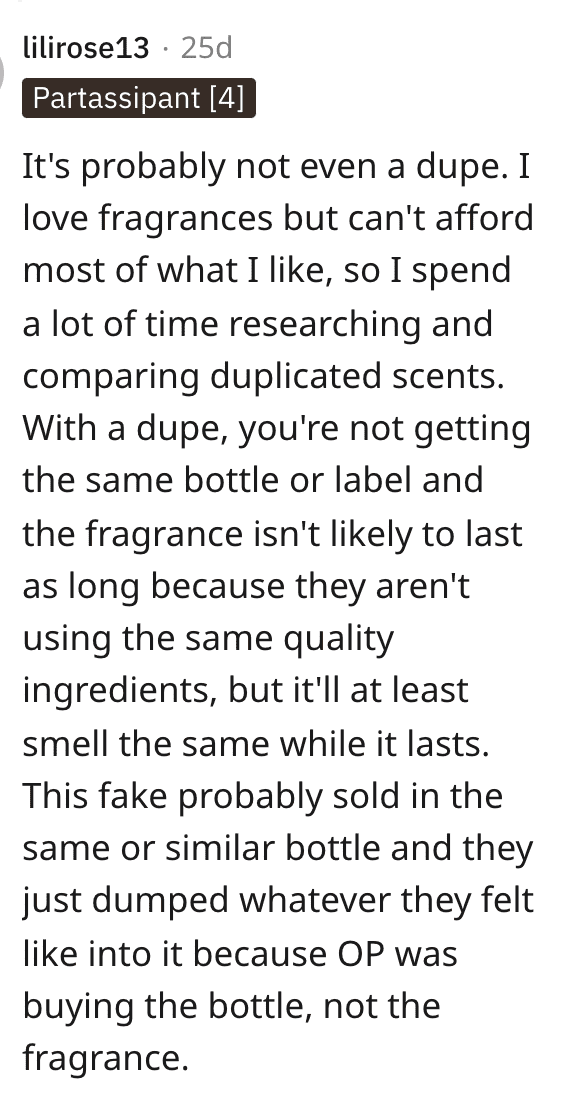 Being interested in perfume doesn’t make you an entitled brat. 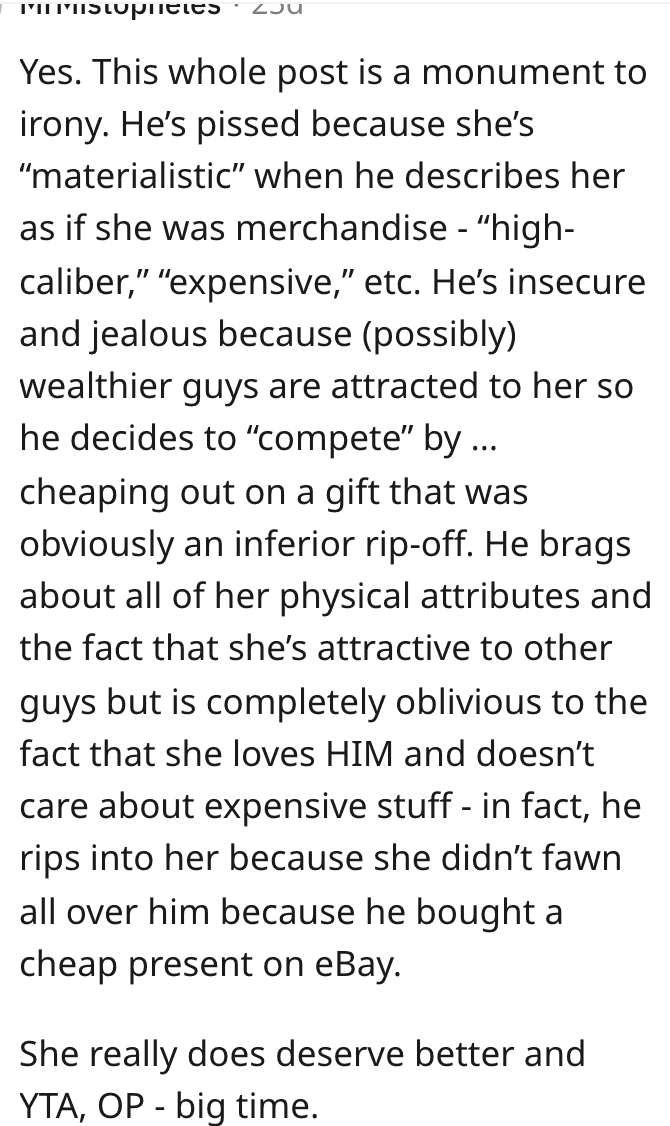 Those of us who have been there can smell an abuser a mile away, too. 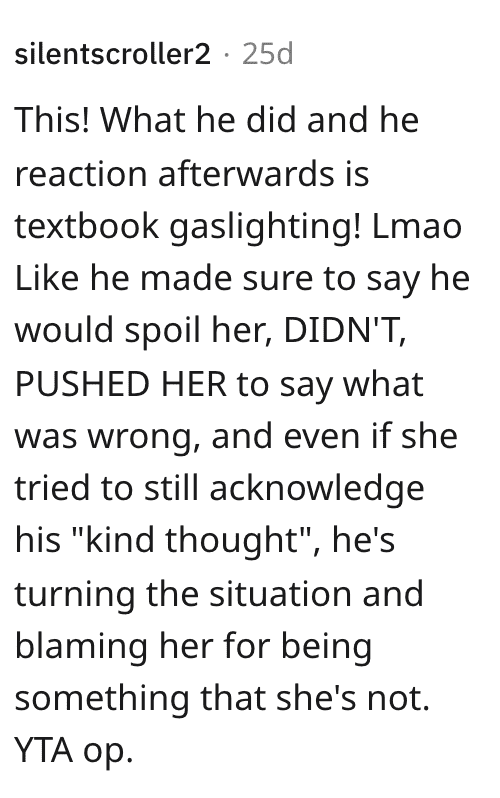 Yeah, this guy can take a long walk off a short pier if you as me.

Have you dated someone like this? If the girlfriend was your friend, what would you tell her? Let’s rant in the comments!