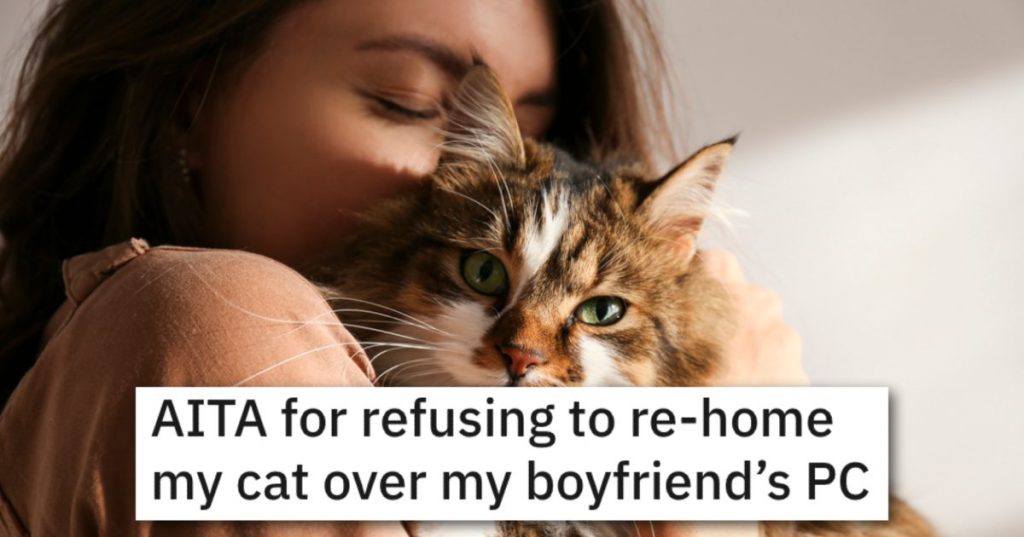 Should You Ever Choose A Personal Computer Over Your Cat?

There are animal people and then there are animal people, you know what I mean? Regardless of how little (or how much) you love your pets – and also all pets and animals that are not pets – it should be 100% accepted that if you bring an animal into your family, you should always treat it as such.

The internet loves cats, and they have little tolerance for people who don’t treat pets like family, so I think we can all guess where this post is going.

OP has been with her boyfriend for 14 years. They have lived together for 8 years, and she has owned the same cat for the entire time they have known each other.

They are not married and do not have children per her choice.

My boyfriend and I have been together for almost as long as my cat has been alive (she’s 14) and have lived together for at least 8 of those years.

We aren’t married after this long because I don’t want to be, regardless of the person. We don’t have any kids and I am child-free by choice.

•He is not mean to my kitty, but has recently not wanted her in the room/on our bed within the last year or so. He’s always disliked kitty on our bed, but I told him too bad and he has always accepted it.

Recently her boyfriend acquired what I can only assume is an expensive PC that he uses for gaming, and he is very protective of it.

The issue at hand is that my boyfriend wants me to re-home my elderly cat because her fur keeps getting in/around his gaming PC.

I do brush her, but she sleeps in our room (always has). The PC is a new purchase that cost a lot of money, and it is in our room because we rent with other people

We do have fans, an air purifier, spray dusting cans, even a fabric cover to put over the PC, but apparently that’s not enough. He claims he has to open up the PC to prevent it from overheating during some things, and that he’s tired of the cat fur “floating into it” while he’s playing.

He cleans the area almost daily and opens the glass (and points a fan into it) when he plays his games. I also haven’t personally seen any hairs in it, but I don’t usually inspect it either. He doesn’t like me using it and hovers, so I don’t go on it. I’m actually not even allowed to have food/drinks anywhere near his desk or leave my items on it either. It’s pretty much just with the PC.

Part of that “protection” is asking OP to rehome her cat, now elderly, because its hair is getting into his computer and diluting its performance.

He’s tried locking the cat out of the room but that makes both OP and the cat unhappy.

My boyfriend has tried keeping my cat out of our room and locking her out, but she will meow and scratch at the door all night long. She is used to sleeping next to me and honestly I enjoy having her there.

I do not enjoy the comments from him telling me she’s “got to go” though.

OP is standing her ground either way, but she’s just curious whether or not anyone online things she’s being the a$$hole.

AITA for refusing to get rid of my cat? I will accept if I am, but it will not change my mind.

Like I said, I think it’s fair to assume how this is going to go, but let’s read Reddit’s comments, just for fun.

The sentiment of “keep the cat, rehome the boyfriend” was strong. 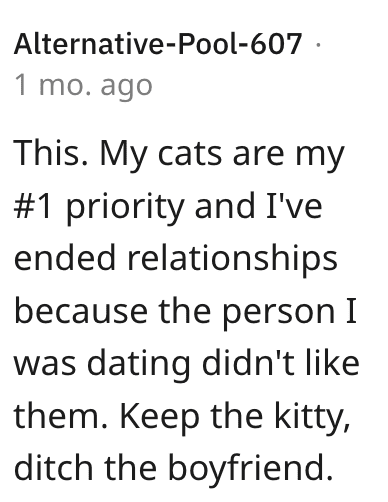 This comment wasn’t the only one to show concern that he might try to do something to the cat on his own. 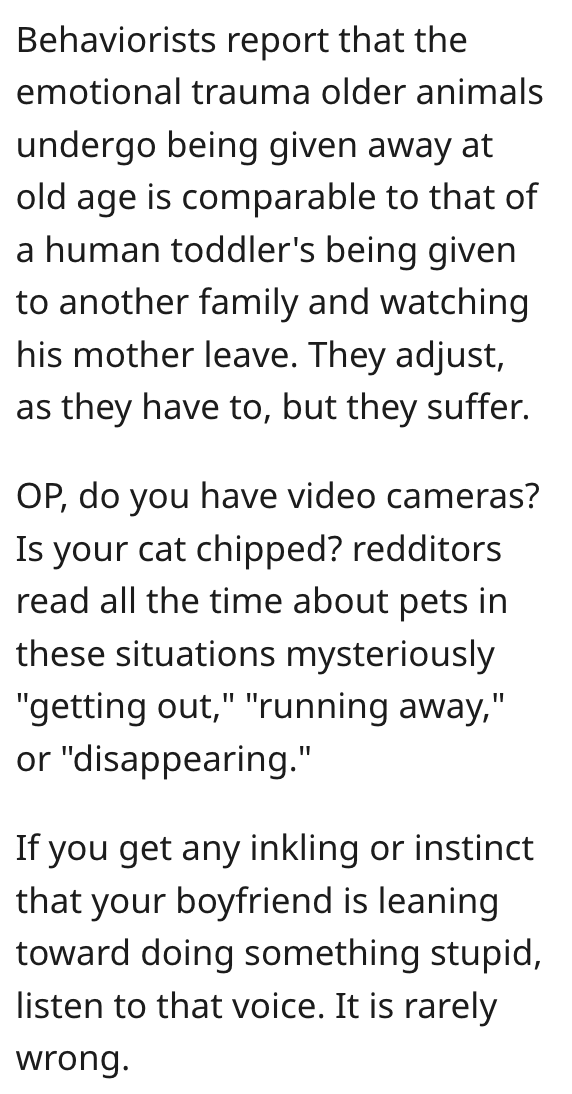 The boyfriend has showed her who he is, so what is she going to do about it? 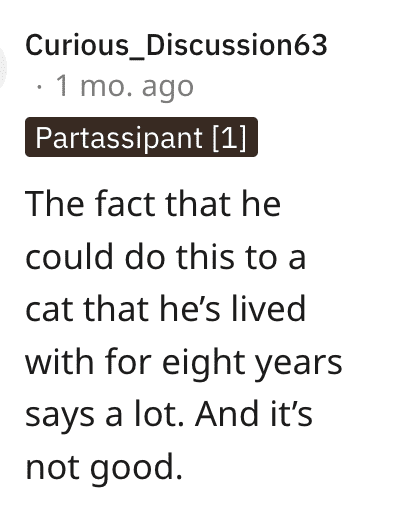 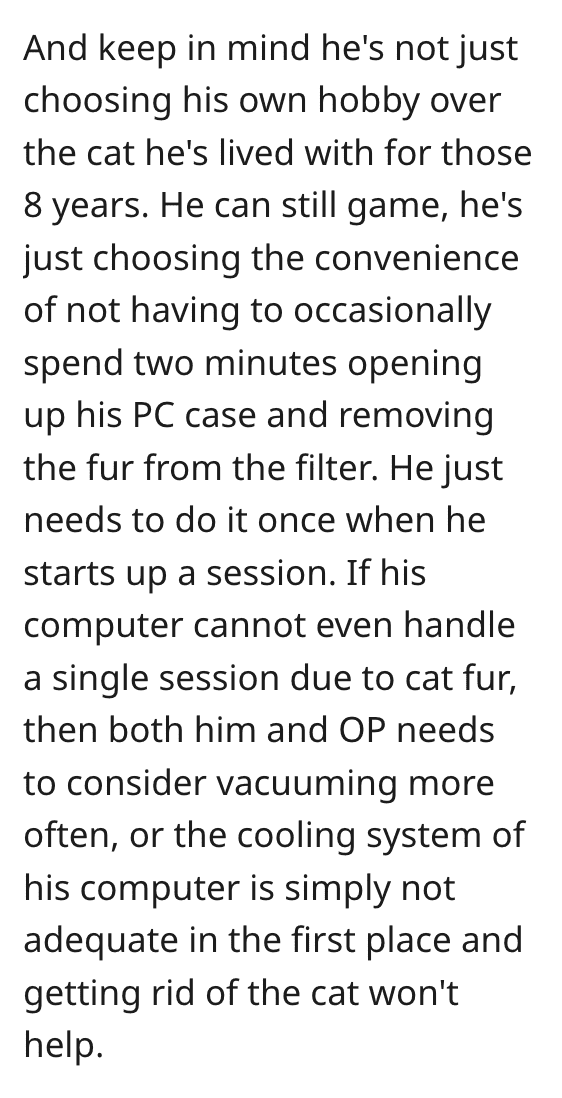 People who do know about computers say he’s the one who should be changing his habits, not the cat. 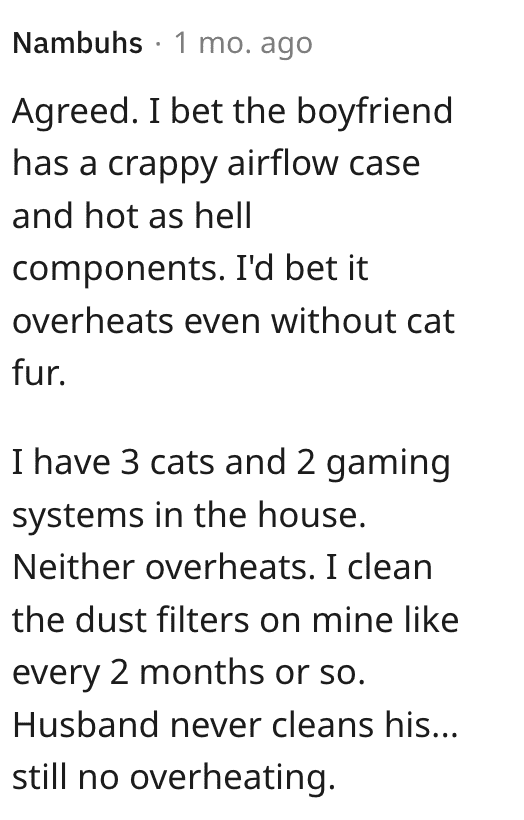 Yeah, no one is giving away a cat they’ve had their entire lives just so their boyfriend doesn’t have to clean his crappy computer every day.

Feel differently? Drop your opinions in the comments!