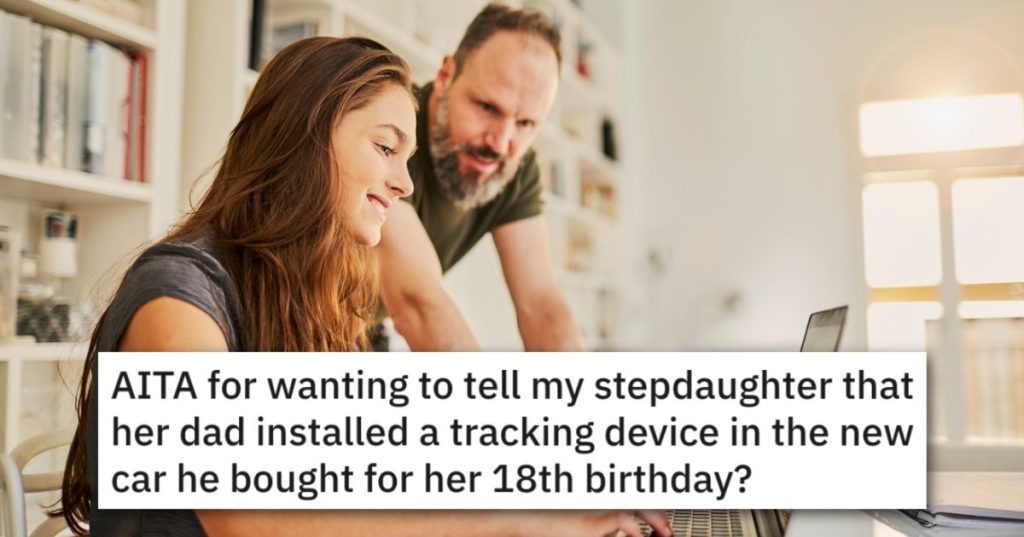 Blending families is tricky. Anyone who has done it will tell you that’s true, and when it comes to a stepparent and their opinions on how to parent kids who aren’t biologically theirs, the ice can be particularly thin.

In this case, OP is close with her stepdaughter – closer than her husband is with his own kid, since he has behaved in ways previously that has damaged her trust.

I f36 have been married to my husband for 3 years. He has one daughter “Christine” , she’ll soon be 18 years old and he’s bought her a new car as her birthday gift.

Here’s the thing. Christine’s mom is deceased. She has a good relationship with me. In fact, not too long ago she told me I was like a second mom to her. This of course means everything to me. However, She and her dad don’t get along that much.

I have to say that’s he’s incredibly overprotective of her but has done things that affected their relationship. Like how he caused her to break up with her ex boyfriend after he got diagnosed with a multiple health conditions.

He’s buying his daughter a car and throwing her a big party for her 18th birthday in an attempt to buy her trust back, and it sort of seems to be working.

Because of that, Christine has grown distant from her dad. For her 18th birthday he wanted to throw her a big celebration and buy her the car she always wanted as a way to reconcile with her.

They’re on ok terms now but he says he wants to gain back her trust.

Then OP overheard her husband talking about installing a tracking device in the car. When she confronted him about it he got angry with her for eavesdropping, and when she said she would tell her stepdaughter about it if he didn’t, he attacked her for being “unhinged.”

Not only that, but he took a shot her her being infertile and unable to have children of her own.

2 days ago, I overheard him speaking with a friend of his about installing a tracking device in the new car. I was stunned. I brought up with him later at night and told him how wrong this was. He said it was non of mu business but I told him that if and when Christind finds out then there’s gonna be troubles.

He got upset and went on about how he’s just doing this out of concern and protection gor her and said it was non of my business whatsoever since I didn’t buy the car. I called him unreasonable and said that if he don’t back off then I’ll tell her at the party and when be hands her the key. He was shocked at this, he called me crazy and said that I shouldn’t have been snooping and listening to his private talks in the first place.

I said I’d tell her but he told me to stay out of it since it’s his daughter not mine and that if I wanted to parent my way then I was free to have my own children.

This stung because he knows I can’t have kids due to infertility problems.

OP’s mother thinks she should mind her own business and not stir up trouble, but should she?

We argued about it and I said I’d still tell her. He called me unhinged and said I get no say nor do I have the right to get involved whatsoever. Just stay of it he kept repeating.

I consulted my mom and she agreed it was non of my business. She told me to stay out of it and not try to stir drama and cause scenes. She said I should know better and stay on my husband’s side since stepkids are always flippant. I’m torn on this but I’m still insisting on it.

The top comment says that no, she’s not wrong. Also, she should check all of her own devices for tracking apps before she runs like h**l. 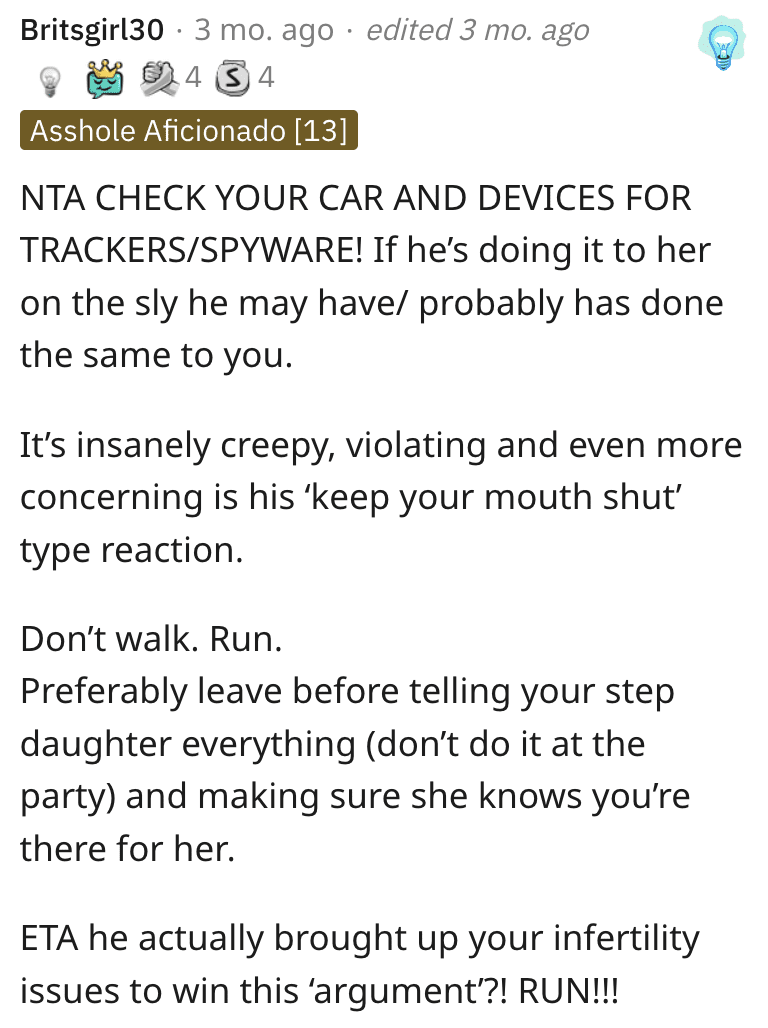 Also she should definitely tell the stepdaughter what’s going on. 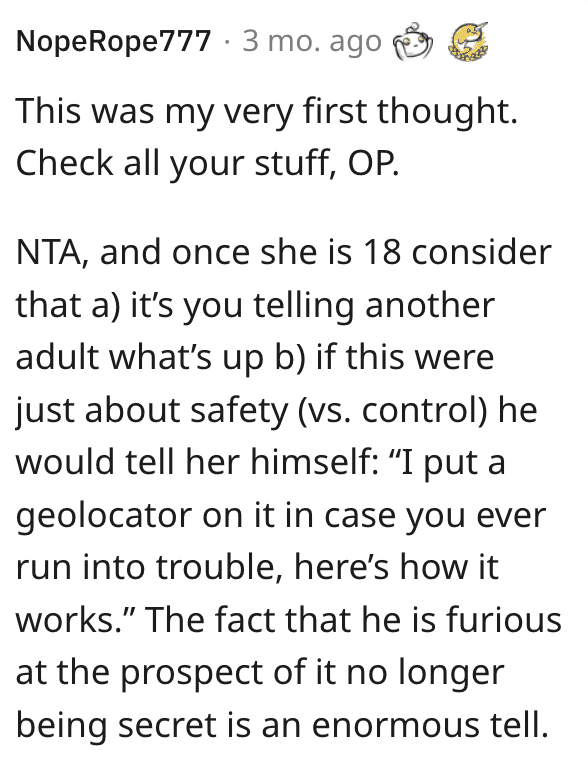 People agree it’s not the tracker that’s the problem, but the fact that he doesn’t want her to know about it. 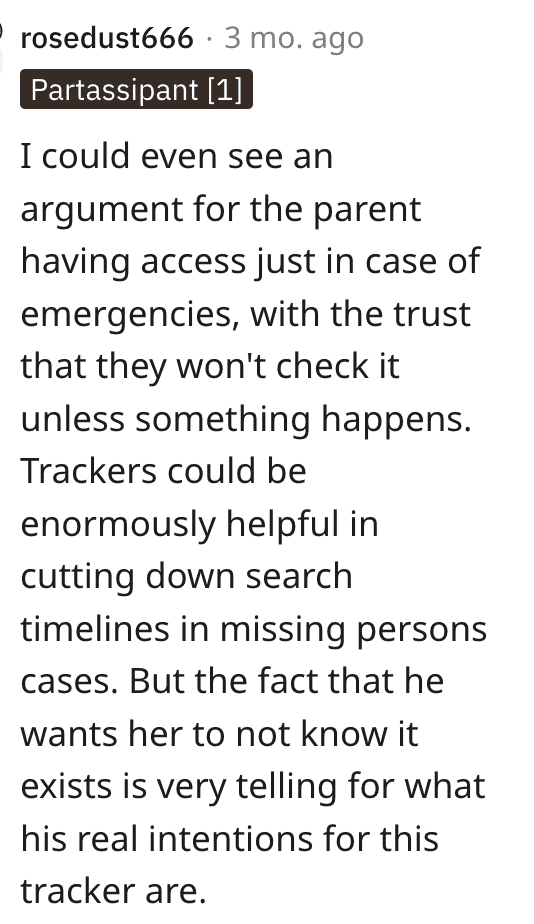 Many think his comment about her infertility is unforgivable. 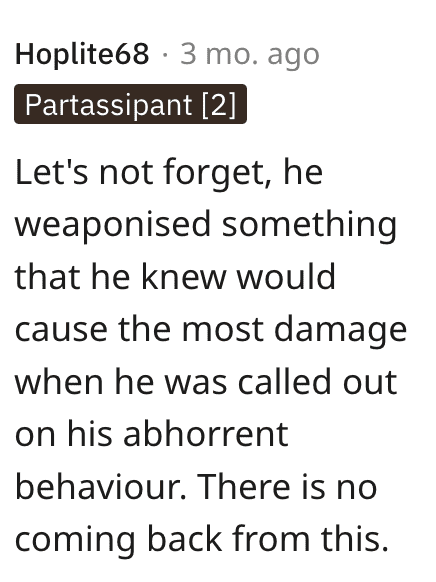 This person points out that this is classic abusive narcissist behavior. 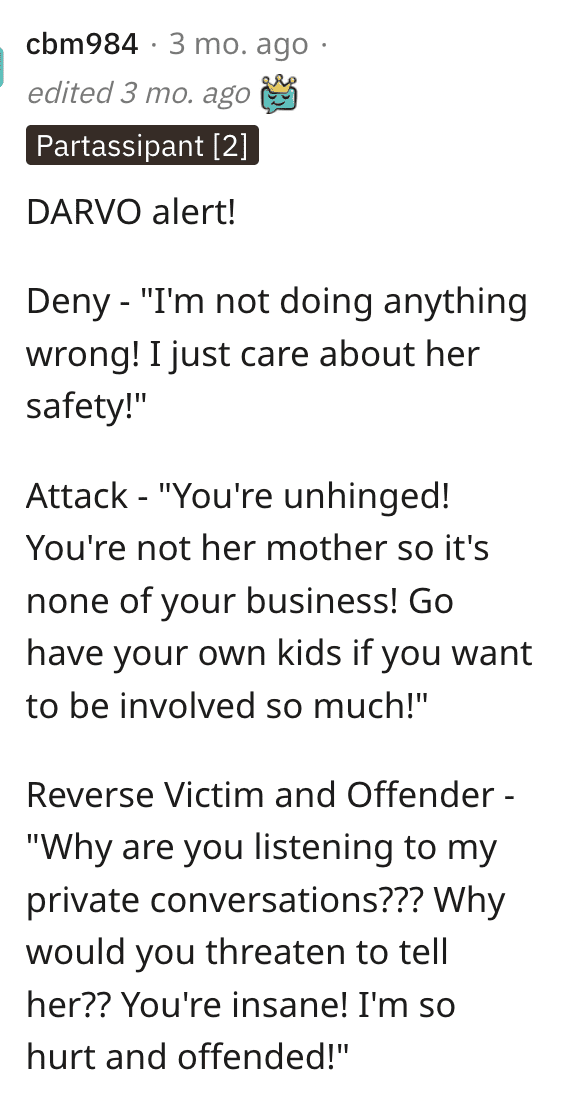 Y’all, I would be furious if anyone did this to me, but perhaps especially a parent I trusted.

Would you be ok with this? Would you ever do it? Tell us why or why not in the comments!