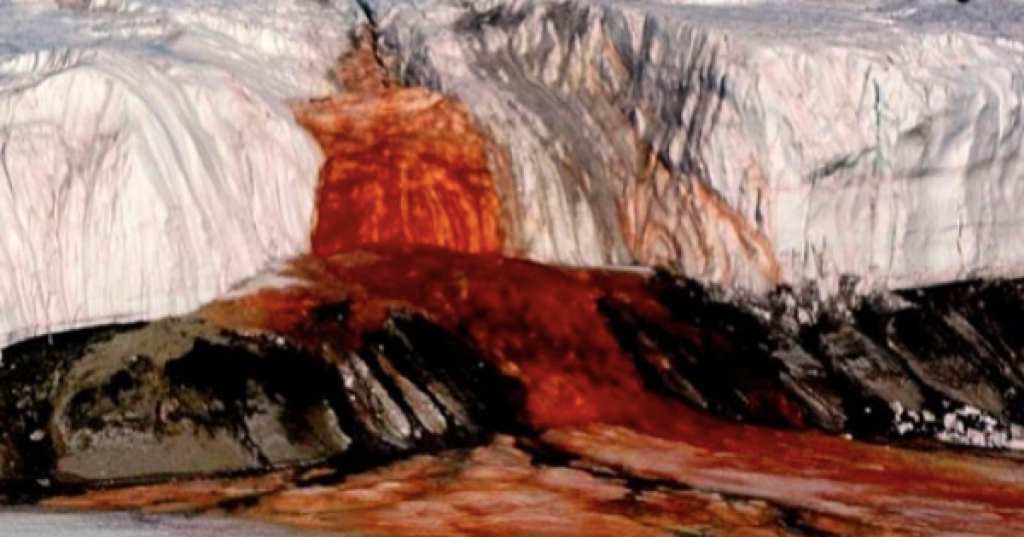 The Facts Behind Antarctica’s “Blood Falls”

Our world is home to many amazing and weird things, and oftentimes those two adjectives can be applied to the same spaces and places.

Traveling in person isn’t a thing many of us are doing these days, but that doesn’t mean we can’t still look at pictures and dream, right?

Not that many of us will ever have the chance to see Blood Falls, which is in Antarctica, in person during our lifetimes, regardless.

🧬 how cool is this shot of Blood Falls, located in the McMurdo Dry Valleys in Victoria Land, East Antarctica? 🇦🇶 The red color occurs when iron-rich liquid breaches the surface and oxidizes, leading to rusts causing a deposit of blood red stains on the ice as it falls #bloodfalls #snow #antarctica #science

The blood-red waterfall is five stories high, and pours slowly out of the Taylor Glacier in Antarctica’s McMurdo Dry Valleys. At first, geologists thought the red color was the result of algae, but luckily, the truth is a bit more exciting.

The Antarctica’s mysterious blood falls! 💉 The red-brown Blood Falls in Antarctica are named for their unusual color, but it's not in fact a gush of blood. The color was initially chalked up to red algae, but recently a study in the Journal of Glaciology has uncovered its true origin using radar to scan the layers of ice from which the river pours. Located in Antarctica’s McMurdo Dry Valleys, the falls pour forth from Taylor Glacier, and the liquid bubbles up from fissures in the glacier’s surface. The flow was previously a mystery, as the mean temperature is -17 degrees Celsius (1.4 degrees Fahrenheit) and little glacial melting can be seen at the surface. Imaging from underneath the glacier helped solve the mystery, revealing a complex network of subglacial rivers and a subglacial lake—all filled with brine high in iron, giving the falls its reddish tint. The makeup of the brine explains the fact that it flows instead of freezes. The lake under the glacier has an unusually salty consistency, and because saltwater has a lower freezing point than pure water and releases heat as it freezes, it melts the ice, enabling the rivers to flow. This is the coldest glacier on Earth with constantly flowing water! 📷 Alasdair Turner The diagram shows how brine is injected into frozen and melting water to produce a red-brown waterfall. Source: Cambridge University National Geographic #antarctica #bloodfalls #glaciers #glaciology #glacier #geology #waterfall #landscape #ourplanetdaily #outdoors #beautiful #polarresearch #womeninscience #sciencecommunication #science #scicomm #explore #wildlife #wilderness #wanderlust #lake #nature #naturelovers #discoverantarctica #southernocean #southpole #travel #icecore #iceberg #ocean

Around 2 million years ago, a small body of water containing ancient microbes was sealed beneath the Taylor Glacier.

They have remained beneath the ice, largely undisturbed, since then – sort of like nature’s time capsule – and have evolved away from the influence of the modern world.

The trapped lake is completely dark, has no free oxygen and very little heat. It has a very high salinity and is rich in iron, the latter of which causes it’s blood-red color.

Ever seen a “bloodfall” ? Well now you have! These so called blood falls, accours because of underground lakes. The lakes contain an absurt amount of iron, and so when it comes in contact with air, it rusts and therefore the red color!🛑 Follow @xourgorgeousworldx for more content like this ! #repost #bloodfalls #crazy #crazyworld #antarctica #lakes #iron #air #naturephotography #nature #world #ourworld #beatifulworld #insane

You have to admit, it would be a pretty wild thing to see in person. It’s kind of a mind-bending sight, right?

If you want to make plans to go, you’ll need to get to Antarctica, hire a helicopter, or take a cruise ship across the Red Sea.

Have you ever been here? Did you want to go?