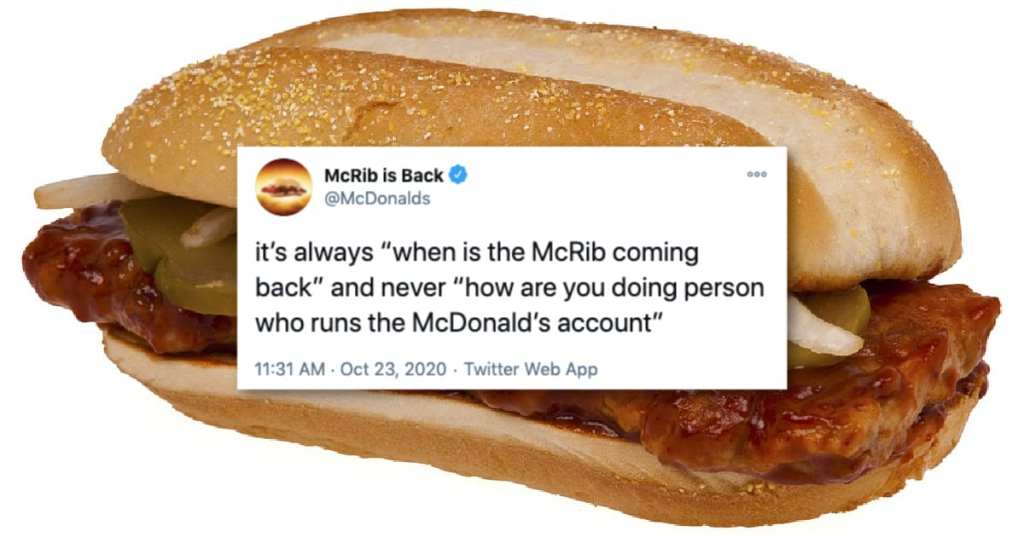 The McRib Is Back for Real This Time

If it seems like 2012 was a really long time ago, that’s probably because it’s the last time McDonald’s offered their legendary McRib.

It doesn’t seem like it’s been that long, but hey. Time makes no sense anymore and I’m pretty sure it doesn’t mean anything, either, so here we are.

If you’re a huge fan of the maybe pork smothered in McD’s signature BBQ sauce sandwich (can someone explain to me where the bones went? And why there are meat lumps instead of bones? No?), you’re going to be jumping for joy – because the McRib is going to grace drive thrus everywhere very, very soon.

PLEASE THE MCRIB COULD SAVE THIS YEAR BRING IT BACK pic.twitter.com/Mmdqq3Ribe

Like, it’s probably already happened since we published this article.

The McRib was first introduced back in 1981, and was on the national menu until 1985. Since then, there’s never been a schedule for it’s re-release, and though some locations have had it from time-to-time, it hasn’t been nationally available since 2012.

Recently, McDonald’s Twitter account teased customers, saying “It’s always ‘when is the McRib coming back’ and never ‘how are you doing person who runs the McDonald’s account.'”

Some other brands had fun with their replies, like Target…

How are you doing person who runs the McDonald’s account?

If you ever feel Ba-Da-Ba-Ba-Bummed, we’re always here if you need to talk, about anything…anything.

But the important reply came from McDonald’s themselves, when the announced the McRib was going to be back nationally on December 2nd.

and to everyone else…McRib is back 12.2

Me to the McDonald's drive thru employee on December 2nd for the McRib. pic.twitter.com/UjS3wDr7rM

This is really happening.

The end of the world may be coming next week…but at least The Mandalorian & the McRib are back. pic.twitter.com/1hsnGTWnaq

Head down to your local McDonald’s, friends, and see for yourselves.

I know 2020 has been an absolute horror show, but McDonald’s is doing their best to make it just a little bit better.

All hail. For a little while, we can love them for more than their french fries.