The Semicolon Is a Fantastic Piece of Punctuation; Here’s How to Use It.

The almighty semicolon. A pompous punctuation mark a lot of people avoid using.

Why? Because it’s so darn confusing!

Most of us would rather stick a period between two sentences and get on our way. But if you’re looking to up your grammar A-game, we might be able to help you appreciate this misunderstood grammar mark.

What the heck is a semicolon?

Glad you asked. It is a period stacked on top of a comma (;). It’s used to create a “pause” between two main clauses.

Secondary question: What is a clause? In general, it’s a sentence containing a subject and a verb. For example She ate the slice of pizza.

A semicolon placed between two clauses creates a bigger impact than a simple period, and it is more concise than a comma with a conjunction.

Is the semicolon practical? Yes, it can be when used correctly.

Who uses the “almighty” semicolon?

Copywriters, editors, and any other person who knows how to use semicolons can incorporate it into their writing. Ie. literally any person – all it takes is a bit of knowledge.

Take Benjamin Dreyer, the VP, managing editor and copy chief of Penguin Random House. He states in his new book, Dreyer English: “If words are the flesh and muscle of writing, then punctuation is the breath, and a good writer will make good use of it.”

Admittedly, Dreyer finds the semicolon to be his favorite form of pronunciation. His love was inspired when he read Shirley Jackson’s books.

Shirley Jackson loved her semicolons. I think that’s all the defense they need. The first paragraph of The Haunting of Hill House—one of the great opening paragraphs I can think of—includes three of them.”

“No live organism can continue for long to exist sanely under conditions of absolute reality; even larks and katydids are supposed, by some, to dream. Hill House, not sane, stood by itself against the hills, holding darkness within; it had stood so for eighty years and might stand for eighty more. Within, walls continued upright, bricks met neatly, floors were firm, and doors were sensibly shut; silence lay steadily against the wood and stone of Hill House, and whatever walked there, walked alone.”

This obviously reads beautifully. But are you still curious about how to use the mark? You don’t have to be a world renown author to understand. Let’s explore… 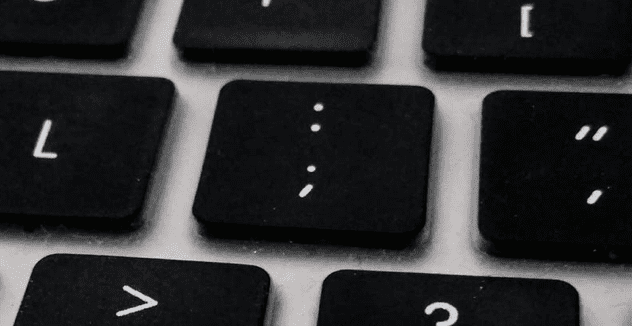 When to use a semicolon

It is said that commas do not achieve the same je ne sais quoi as semicolons. “Semicolons provide the right link between two essentially independent thoughts that one wants to present as just shy of independence,” explains Dreyer.

When there is a more intimate relationship between two sentences, a comma (or period for that matter) can’t display the connection.

For example: John has a big meeting tomorrow; he can’t go out tonight.

Now try reading it with a period: John has a big meeting tomorrow. He can’t go out tonight.

The full stop stunts the relationship between the two. Although subtle, the semicolon allows your mind to discern that these two sentences are linked.

Use a semicolon to mark a transition

This is a great way to allow your written sentences to flow easier. In writing, there are transitional words and phrases such as however and as a result, formally called sentence connectors. Utilizing the semicolon will provide free-flowing reading without a harsh period in the way:

Jane was running late for her exam; as a result, she was unable to complete the test in time.

This one can be a bit tricky. We’ve all used commas in lists before. For example: I am running to the store to pick up chicken, deodorant, and dog food. Simple, right? But what if you needed to explain why/what/how? Enter the marvelously sexy semicolon.

I am running to the store to pick up chicken that needs to be organic; deodorant because my favorite brand is on sale; and dog food, since my puppy ate the last of what we had.

When to avoid a semicolon

Now that we understand when to use a semicolon, when should you not? A good rule of thumb is to avoid it when using a coordinating conjunction like but or and. Let’s revisit our earlier example where the semicolon was used:

John has a big meeting tomorrow; he can’t go out tonight.

You could replace the semicolon with a coordinating conjunction, and it still makes sense.

John has a big meeting tomorrow, so he can’t go out tonight.

Either way, the thought process remains the same.

The semicolon is not for everyone, so when in doubt use periods to separate connected thoughts. But continue to practice using the semicolon – even though it may seem like a useless piece of grammar, it is really an elegant part of the English language.

Plus it’ll make you look really smart to your boss and peers!