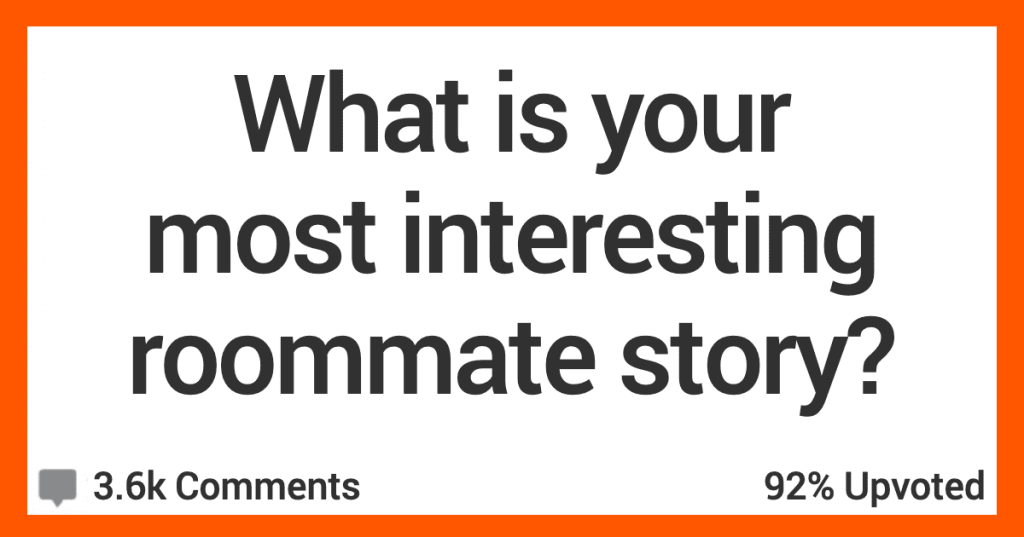 Did you ever have a roommate that drove you insane and you couldn’t wait until your lease was up so you’d never have to deal with them again?

I sure have…and it sounds like these people on AskReddit had to deal with some real doozies, too!

See if your roommate stories measure up to these!

“My South Korean roommate in college played StarCraft (2? not sure) welllll into the night. We’re talking like I’d be getting up to go to class and he’d be logging off.

It cured my insomnia. Listening to a game in a language I didn’t understand was very soothing, apparently, and I went from taking 3-4 hours a night to fall asleep (if I would at all) to falling asleep within 30 seconds of laying my head down.”

“My roommate in college claimed he was involved with the mafia. He was constantly sweaty, was very jumpy, and always had a lot of cash in his car. He never was around on the weekends, and I never saw him drink.

Strangest of all, is that he never once slept in his room. He was always on the couch by the door. He eventually told me that it was because if someone ever broke in looking for him, he wanted “them” to find him right away, so no one else would get hurt.

I still don’t know if he was telling the truth but nonetheless I ALWAYS locked my bedroom door at night.”

“I’m pretty sure I used to live with a hobbit.

-Never wore shoes, inside or out

-Would bring home samosas and other goodies, always giving me half just because

“I used to cook dinner and always made enough to offer to our room mate.

He paid his bills and rent always but sometimes he didn’t have enough for food so I would cook and say “hey man, wanna have dinner with us?”. He would usually say he didn’t like whatever I was making. Fastforward to morning…all the leftovers were gone.

His explanation? He must have been sleepwalking and ate it in his sleep. This happened 15 to 20 times over a year period. Minimum. He would make these big song and dances about how what I was making was gross, so I would put up enough leftovers for two (my boyfriend and I) then go to bed. What was to be lunches for work gone and often dirty utensils in the sink.

Fast forward another 5 years and he called me at 3 am after not talking to me or my partner for 3 years, and told me my now husband (aforementioned BF)was doing Crack in front of our 4 year old. I called my husband, who was asleep. Neither of us had talked to him in years…what was this?

Fast forward another 5 years. He’s on D**th Row for k**ling his roommate. His defense? He did it sleepwalking.”

“When he skipped out on rent, and moved while I was at work, he left behind some of the most interesting p**n I’ve seen.

He was into amputees and urine.

He also vomited on the carpet, never cleaned it up and it ate through.

I didn’t get my deposit back.”

“I taught a roommate how to boil water.

Iced tea was the first thing, other than sandwiches and salads, that she had ever made.”

“One of my roommates used to sleep walk and sleep talk almost every night and I was the only one who’d be awake whenever it would happen.

I’d witness her cleaning our fridge, sealing our opened bag of chips, and i’d hear her quote Shakespeare in her sleep.

What made her go back to bed was me asking her to sleep and she’d look at me and close her eyes. Whenever I ask her if she recalled any of it, the answer was always no.”

“I had a roommate that became very… susceptible to suggestions when he would first fall asleep. And wouldn’t remember anything he did the next morning.

One time, we woke him up and told him that his girlfriend had stolen his shoes. He jumped out of bed, went to the landline phone (yeah, I was in college 20 years ago), called up his girlfriend and accused her of stealing his shoes. We were all dying laughing at this time.

She blew him off, and after he hung up, he went into the kitchen. When he came back, he was holding two brownies, and had the saddest look on his face. “Look, my girlfriend burnt up my shoes. I’ll never be able to wear them again.” He placed them next to his bed, and then went back to sleep.”

“My roommate once create a whole new lifeform by leaving beans in the fridge until they molded so bad they became pure white.

Then she got mad when I threw it away because she was going to use it later.”

“My freshman year college roommate was a random pairing. This kid partied all night and slept all day (legit wouldn’t wake up until 5pm) He goes MIA for like a week. I call my mom because I’m not sure he’s even alive. She searches to see if he has been arrested.

Before she can call me back the cops are knocking at our door and ask “have you seen ____” and I say no. Mom calls me back a few minutes later, he had been booked for robbery at a convenience store which was in our dorm building!

He tried to hide in an air vent…he made the front page of the campus newspaper, was expelled and I got the whole dorm to myself for the rest of the fall & spring semester.”

“My first ever roommate freshman year of college was one of the most impressive people I had ever met.

He had a great job that covered his cost of living and tuition (this is 2006), had his own place, was getting great grades in a tough program, and was with an amazing woman. I was super stoked when he offered to let me rent the 2nd room.

Over the next year I watched all that fall apart due to a sudden and overwhelming WoW addiction. I can still remember the time when I was trying to get him to log off because he was about to miss this long-standing, fancy night out with his gf. He looked at me with genuine remorse and said “I can’t.””

“She was majorly depressed. She worked a lot and for very little money, so she would mostly come home and lock herself in her room. At some point, she stopped cleaning or doing laundry.

She worked at a childcare center, and at some point contracted impetigo. Gross, but treatable. She wouldn’t get it treated, however, because it was too expensive.

So I lived in fear I would contract it, let alone the other kids she was watching (she told her work it was being treated and was no longer contagious, they just believed her). She had these massive, crusty patches all over her face and just didn’t care. After five whole weeks, she FINALLY went to the doctor.

Things were tense until her mom came to visit a few weeks later and convinced her to be committed. She had been sending suicidal messages to her mom every day for weeks. Her mom paid her rent for the next three months until the lease was up, and she moved back home. Never spoke again. Hope she is doing better.”

What is your most interesting roommate story?