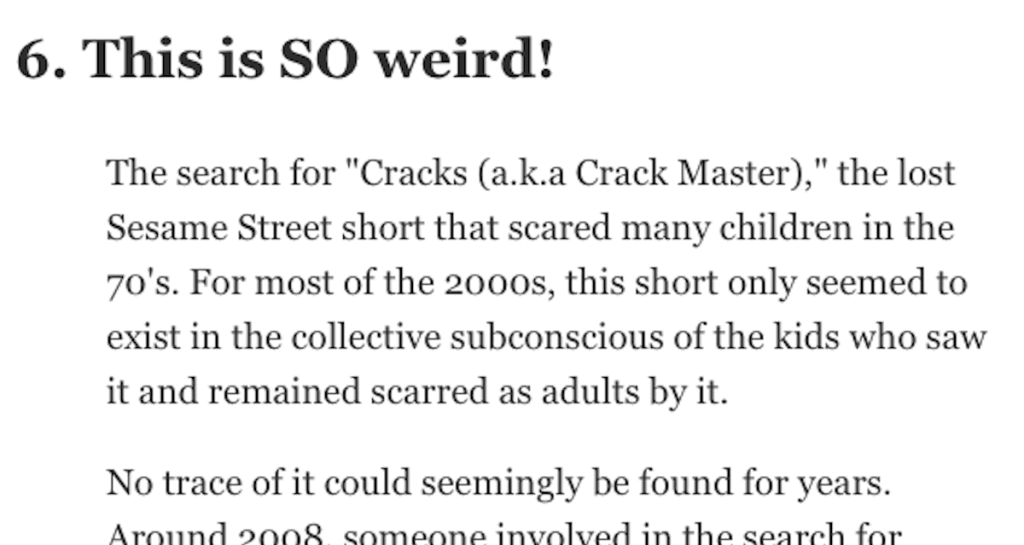 These 13 Mysteries Will Get Your Hackles Up, but Don’t Worry, There Are Answers

Don’t get me wrong, I love all true crime stories, but the ones that remain unsolved or full of questions just aren’t quite as satisfying – which means these 13 totally solved mysteries are the order of the day.

“The Bloop”. For years science was baffled, not having a good explanation. Some supposed it may be an as of yet undiscovered creature, but the magnitude of the sound itself was such that if it were produced by an animal, it would be larger than even a blue whale, by a wide margin.

A few years back we recorded the sound again, along with solid seismological data. Turns out the famous “bloop” was the sound of a large piece of the Antarctic ice shelf cracking and falling into the ocean.

12. I would have guessed raccoons.

Case of the Beet Bandit.

Missing beets from all over the farm, no footprints.

Inside job, mouse in socks.

His scoliosis was so severe that his spine resembled a question mark! Tho based on the way it is shaped the researchers suspect that he had minimal humpage on his back and more of a slightly raised right shoulder. So they did conclude that his appearance was probably greatly exaggerated by later historical accounts, Shakespeare most famously.

However, they were confused how someone with such a massive bend in their spine could have fought in the civil wars that Richard’s family was embroiled in for decades even though by all contemporary accounts he did and was a very accomplished soldier.

The documentarians actually found a man that had an almost identical form of scoliosis and put him in specially made armor (which they presumed Richard would have had access to being part of a noble and then royal family) and put him thru many knightly challenges and found that Richard absolutely could have been an accomplished warrior despite his physical disabilities. Sorry this period of English history is my favorite!

10. Solving this earlier would definitely have been better.

Wearside Jack (UK). In the late seventies he sent a hoax tape and letters to the police purporting to be the Yorkshire Ripper. The police interviewed the actual Ripper a few times but discounted him because his accent didn’t match.

More women died as a result, but 25 years later they DNA tested the envelopes and he was convicted of perverting the course of justice.

9. The answers make this one no less bizarre.

Lori Erica Ruff. This guy in Texas married a woman he met in bible study, had a child with her, and then she started showing signs of mental illness. They divorce and she commits suicide in 2010. She left a suicide note that was incomprehensible and full of random phrases and references.

When her ex was going through her stuff, he found a birth certificate with the name Becky Sue Turner on it, who was a 2 year old girl who died in a house fire in WA in the 70s. Lori had stolen Becky’s identity and used it to get her name changed to Lori Erica Kennedy. There were no clues whatsoever as to who she was before she acquired the false identity and her backstory remained a mystery for years.

A few years later she was identified by matching her daughter’s DNA to a distant relative in Pennsylvania. It turns out Lori’s real name was Kimberly McLean, and she’d left her home in PA in 1986 as she didn’t get along with her mom and stepdad.

I was really fascinated with this one when it was still unsolved, and I found the actual answer a bit anticlimactic. It was clear from everything she’d left that something was wrong with her, and it really gave me the creeps.

8. Make sure to read it all the way to the end.

On March 23, 1994 the medical examiner viewed the body of Ronald Opus and concluded he died from a shotgun wound to the head. Mr. Opus had jumped from the top of a ten-story building intending to commit suicide.

He left a note to the effect, indicating his despondency.

As he fell past the ninth floor, his life was interrupted by a shotgun blast passing through a window, which killed him instantly. Neither the shooter nor the deceased was aware that a safety net had been installed just below the eighth floor level to protect some building workers and that Ronald Opus would not have been able to complete his suicide the way he had planned.

Ordinarily, a person who sets out to commit suicide and ultimately succeeds, even though the mechanism might not be what he intended, is still defined as committing suicide. That Mr. Opus was shot in the way to certain death, but probably would not have been successful because of the safety net, caused the medical examiner to feel that he had a homicide on his hands.

The room on the ninth floor, where the shotgun blast emanated from, was occupied by an elderly man and his wife. They were arguing and he was threatening her with a shotgun. The man was so upset that when he pulled the trigger, he completely missed his wife and the pellets went through the window, striking Mr. Opus.

When one intends to kill subject “A” but kills subject “B” in the attempt, one is guilty of the murder of subject “B”. When confronted with the murder charge, the old man and his wife were both adamant and both said they thought the shotgun was unloaded. The old man said it was a long-standing habit to threaten his wife with the unloaded shotgun. He had no intention to murder her. Therefore, the killing of Mr. Opus appeared to be an accident; that is, if the gun had been accidentally loaded.

The continuing investigation turned up a witness who saw the old couple’s son loading the shotgun about six weeks prior to the fatal accident. It transpired that the old lady had cut off her son’s financial support, and her son (knowing the propensity of his father to use the shotgun threateningly) loaded the gun, with the expectation that his father would shoot his mother.

Since the loader of the gun was aware of this, he was guilty of the murder, even though he didn’t actually pull the trigger. The case now becomes one of murder on the part of the son for the death of Ronald Opus.

Further investigation revealed that the son was, in fact, Ronald Opus. He had become increasingly despondent over the failure of his attempt to engineer his mother’s murder. This led him to jump off the ten story building on March 23rd, only to be killed by a shotgun blast passing through the ninth story window.

The son had actually murdered himself, so the medical examiner closed the case as a suicide.

7. Imagine seeing one for the first time and wondering what had been in there with you.

Those flying “rods” in the background of cave diving videos.

People in the 80s and 90s would go cave diving or sky diving and film it, and in the background would be all these foot-long, flappy, rod-shaped creatures that no one would see until they were caught on film. People thought they were inter-dimensional creatures that would slip into our dimension occasionally. Some studied the shape of these things in wind turbines to understand how they fly. I think there was even a hieroglyph found of the creature from ancient Egypt.

It turns out the frame rate of the shitty handheld cameras from that day made birds and bugs get caught in multiple frames at the same time, and so they looked like long rods with wings.

The search for “Cracks (a.k.a Crack Master),” the lost Sesame Street short that scared many children in the 70’s. For most of the 2000s, this short only seemed to exist in the collective subconscious of the kids who saw it and remained scarred as adults by it.

No trace of it could seemingly be found for years. Around 2008, someone involved in the search for Cracks received a mysterious email containing a video of the short, along with the explicit instructions to not release the file to the public.

Later, in 2012, the head admin of the Lost Media Wiki received a similar email, but this one came without any specific instructions. He uploaded the short to YouTube immediately after, ending the long hunt.

People are still working on finding out which people were responsible for Cracks’ creation. So far, they’ve managed to track down the woman who narrated the short, but have been unable to turn up any leads.

5. AND she was found alive!

The kidnapping of Jayme Closs occurred on October 15, 2018, when Jake Thomas Patterson abducted 13-year-old Jayme Lynn Closs from her family’s home in Barron, Wisconsin, around 12:53 a.m, after forcing his way inside and fatally shooting her parents. Patterson took Closs to a house 70 miles (110 km) away in rural Gordon, Wisconsin, and held her in captivity for 88 days until she escaped on January 10, 2019.

Patterson was taken into custody shortly thereafter and told police he kidnapped Closs and killed her parents. He pleaded guilty to two counts of first-degree intentional homicide and one count of kidnapping. On May 24, 2019, Patterson was sentenced to two consecutive life sentences in prison without the possibility of parole plus an additional 40 years.

4. I honestly have no idea.

The purpose of the appendix is now understood and has an important function, though it is not quite as useful now as it was back before we understood proper food preparation and storage.

Basically, it resets all the good bacteria in your gut when sickness (like diarrhea) upsets the balance.

That’s why, when it bursts, people get REALLY sick, REALLy fast… because it’s a time bomb of bacteria going off inside of you.

3. Those ancestry sites are killin’ it.

The Golden State Killer. I had just got into his cases and thought man, this guy was crazy and will never be caught.

They ended up finding out who he was because his daughter did a DNA test on some genealogy site and found out it was her dad.

2. Can you even imagine?

The escape of Gina DeJesus, Amanda Berry and Michelle Knight in Cleveland in 2013. They were kidnapped and held captive for ten years.

I don’t remember a lot of detail but this guy kidnapped 3 girls in their mid teens and held them captive for like 10 years. They were finally found when one of the women’s child she had with him escaped and ran out to get help.

1. Who would’ve thought it was just some water and ice?

That one where the rocks moved in the dessert leaving an eerie trail.

Some guy put a camera on the area for like two years and discovered that when there is a thin layer of water with ice on it, the wind will move the ice as it starts to melt and so moving the rocks.

I’m definitely going down a rabbit hole with a few of these, how about you?

Tell me which one really piqued your interest in the comments!