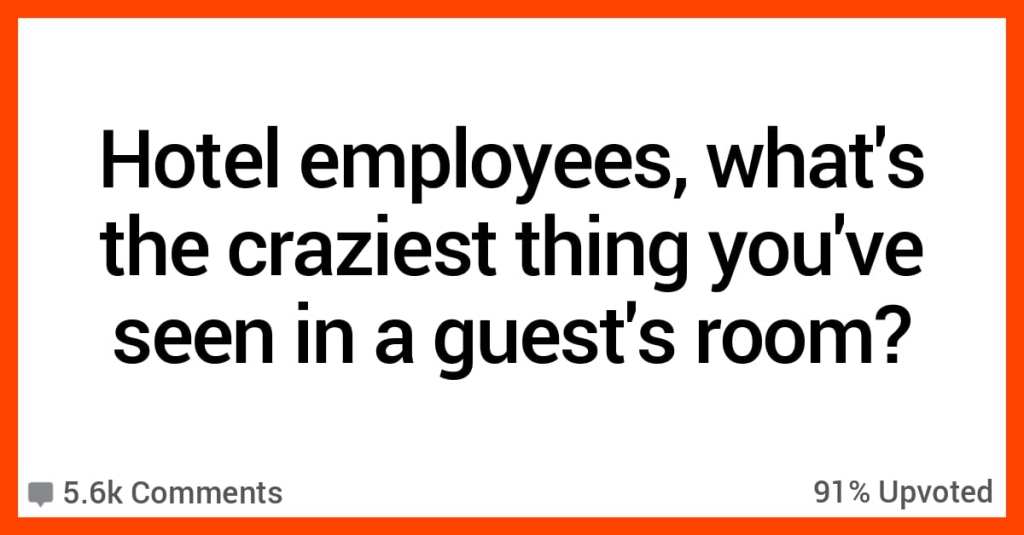 These 15 Hotel Workers Have Seen Some Really Weird Things

I’m not sure the news that people who work in hotels see weird stuff is surprising news, exactly, but I’m also not sure I expected the stories to be this strange.

These 15 hotel employees are ready to tell their stories, but I’m honestly not sure we’re prepared to hear them.

A friend of mine worked in Housekeeping, she called me up one day like “you have to see this.” She’s in one of the High end suites. (This was in a casino, so for the super high rollers) The customer that had stayed was a regular; and she was a conservative older woman.

Scattered among hundreds of empty Sunkist cans are dozens of d*ldos, empty tubes of lube, other various s^x apparatus. No alcohol bottles, not even the nips from the mini bar had been touched, just orange soda cans everywhere.

Not me, but a mate of mine worked at an Ibis in Sydney (cheapish hotel brand in Australia, unsure where else) as a temp cleaner. Not really disgusting or weird, but the residents had decided to cover the floor in the bathroom with mayonnaise, and the same with the mirrors.

I was working at a luxury hotel and we had a fairly big name band staying with us. There were no noise complaints, and they seemed to be perfect tenants.

When they left and we went to clean the room, EVERY SINGLE PIECE of furniture was nailed to the ceiling in roughly the same configuration that it was in on the floor. I found it to be quite amusing. Management didn’t.

Happens more often than you would think.

We had a guy that was active military that would stay often. He would leave his very large suitcase full of s^x-toys wide open on the bed for the maids to find while servicing his room.

We eventually had to ask him to leave the property and not return after he pooped on our very white towels and promptly folded them and re-hung them so the poop didn’t show.

Guy and girl meet a drug dealer at his hotel room. They guy didn’t have enough money or something. So the dealer tells him to go get it while the girl waits with him in the room.

Apparently the guy bailed and ditched his girlfriend with the scumbag drug dealer. When it became clear that the guy was not going to come back, the drug dealer spent a few hours raping the girl. Security went to the room because of several noise complaints. The security guy knocked on the door and heard someone start yelling for help.

He called for back up. While security was calling the cops the drug dealer fled the scene. When the police showed up they found some drugs, a big bag of sex toys, a gun in the room and a severely battered and traumatized woman.

This couple stayed in one of our rooms for a week, they would just ask if we would put fresh linens and towels by the door and that they would take any trash to the dumpster. So after their week of being there, and none of our housekeepers had been in that room for a week, one of them opened the door…

The first thing was the smell, it made our head housekeeper puke and she had to run away, they had sh%t all over the walls and rubbed it in. They sh%t on the floor, television, beds, air conditioning system, and even clogged up the shower with shit. We’re thinking they must have had a party of people just sh%tting in this room.

It was so bad that we had to evacuate the hotel (ask everyone to leave and pay for them to go to another hotel), call the cops, call a hazmat cleanup crew and it took a week and a half to clean this room. Today is my last day there. It was sold to a company that wants to make it into offices.

Last night I found an old man bathing in the pool, just for references. If you want a job with free coffee and wifi and never a shortage of ‘wtf’s’ then get a hotel front desk job.

My friend said he found a crack pipe in the coffee maker.

This was in atlanta, ga.

My family is in the hotel business. One day a particular room just started to stink to high hell for no apparent reason. We checked everywhere multiple times looking for the source of the scent, no dice. We sprayed everything in the room numerous times with deodorizer to no avail. Left the room open daily for months to air it out without any change.

Finally, we somehow tracked the smell to the table lamp. We were dumbfounded, asking ourselves how it could be emanating from there. Son of a bitch had broken the thing, put a fish in it, and glued it back together. My brother and I died laughing and actually applauded this guy’s ingenuity. He got us good, and I ain’t even mad at that.

I work at a hotel in Ontario and one of our housekeepers decided she needed to take a shit while cleaning some guys room, so of course instead of using the employee washroom down the hall she say down and did her thing.

The guest had forgot his briefcase and walked into the room to discover a 20 year old girl taking a dump in his room with the door open. She was fired

No other fire damage just a melted toilet.

4. I feel sorry for everyone involved.

A woman who was showering but got sick (food poisoning) and she went to throw up. While throwing up, naked, she then got the other part of food poisoning and spray shit all over the wall, floor, cabinets, and mirror. It was stomach churning but impressive.

The smell of this was horrid, I had to leave the room and come back twice because I needed to get some fresh air. When everything was wrapping up and security was just getting information for their report (we record anytime we have a medical problem at the hotel) I left.

I pulled out my phone and called housekeeping right away and said “We just had some lady go to the bathroom all over the bathroom. Send a few people out here with extra gloves, a bunch of sanitize and as much deodorizer spray they can find.”

I worked hotel security years ago. I was working third shift during a convention one night, when I got on one of the elevators while doing a routine check of the building. The doors of the elevator opened up, and there in the middle of the floor was a pizza box.

Something about that seemed a bit off, so I opened the box by stepping on a flap with one foot while flipping the lid open with the other. Inside were two huge human turds studded with dozens of toothpicks.

There’s no more story here, at least none that I know. Working as a cleaner in a hotel, went to clean a guest’s room, dreading it since they’d been there for a stag do, found the goat.

Don’t know how it got there, or how it was removed, but it made a good story for a while.

1. This story is one wild ride.

At one point in my life I worked the front desk at a local hotel. I worked the evening shift, and at least twice a week these two transgender girls (men who became women, passable looking) would get a room.

They would always go to the bar down the road after checking in, and usually always bring back a couple of guys with them. One night, my co-worker calls out and I’m stuck doing the overnight shift. It’s about 3:30 AM, and I’m finishing up the audit early because it’s a pretty slow night. At this point, you would go around the hotel and slip receipts under the door of each guest.

Anyway, I get to the third floor and the first, first and only, thing I can see is one of those t-girls completely naked, passed out drunk with a bottle of wine, bent over the hallway couch as if she was left waiting for someone to f*ck her (or passed out right after).

As I try to wake her up, she tries to pull me down onto the couch, then tries to seduce me by rubbing my thigh, all while I’m trying to very nicely push her hands off of me and ask her to get to her room before I call the police.

I left that room as fast as I could, gave the housekeepers a heads-up in the morning, put a note in the computer saying to not allow those two to check-in again. One of the housekeepers quit two days later, which I’m pretty sure was because of that experience.

Just when you think people can’t shock you anymore…

Has anything like this ever happened to you? If so, I think I want to hear about it in the comments!