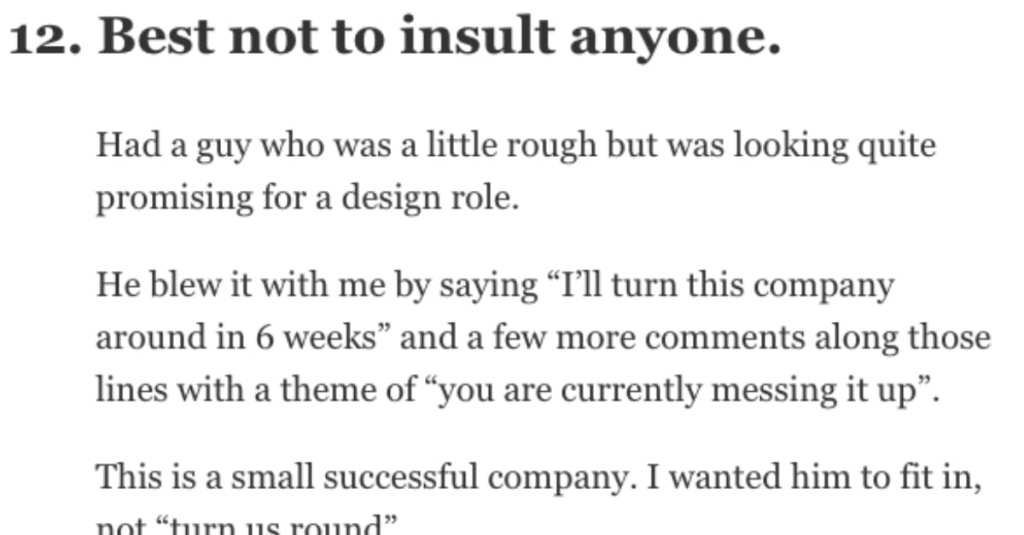 I think that being in charge of hiring for a company would be one of those jobs that has as many highs as it does lows. You get to give people a job, which is awesome, and welcome them to the company.

You also have to be the person who goes through a lot of nuts to find the right fit, though, and you have to tell plenty of people they’re not getting the job, which must be tough.

In these 13 cases though, there was no hemming and hawing, because the person being interviewed did something that totally blew it on the spot.

I was interviewing clerks for a gas station. One was a relative of a friend of my supervisor. He was clean and showed up on time. He also answered every question with “Back when I was selling crack cocaine…” My supervisor said I had to hire him, so I did. It went as well as you might imagine.

12. Best not to insult anyone.

Had a guy who was a little rough but was looking quite promising for a design role.

He blew it with me by saying “I’ll turn this company around in 6 weeks” and a few more comments along those lines with a theme of “you are currently messing it up”.

This is a small successful company. I wanted him to fit in, not “turn us round”.

A woman casually mentioning that she wanted to set her ex on fire. Totally unprompted and unrelated to anything that had been asked. Later, when asked how to handle difficult customers she said she would set them on fire as well.

A guy turned up where I worked oxne for an interview and started giving the receptionist grief because the interviewer was running late. It clearly wasn’t her fault and it was entirely unacceptable. The interviewers didn’t even bother, just invited him to leave.

Had a guy literally SPRINT out of the building.

I wasn’t the interviewer, I am a web developer, but as we were trying to hire a second developer I was asked to prepare some basic web development questions.

These were not hard. These were absolute bare basics babies first code stuff.

This guy came in, started interviewing and was apparently doing okay, not fantastic but enough to keep him in consideration. Then he saw that we had a test and he apparently grabbed his bag and ran out of the room. All I saw was this guy sprint full-tilt past the rest of the office, shoulder-barge out the door and run off into the distance, followed by our two directors stumbling out of the interview office laughing uncontrollably.

I guess he lied on his CV?

8. Yes that is definitely a problem.

Friend of a friend (call him Bob for short) got a job despite not being the best “qualified” candidate.

Down to the final two for a teaching job, there was Bob who was a solid, unremarkable candidate. Clearly good enough for the role but nothing special about him.as a candidate… and then there was Charlie. Charlie was an absolute rock star teacher. Won awards, young dynamic and driven, outstanding teaching demo, just the nicest guy who had glowing references.

Then they asked “any questions?” and he replied “could you tell me if you’d have a problem with a teacher dating a student?”

…yes. yes they would.

Bob got the job.

6. Not gonna win anyone over with that.

My dad is a QC/QA manager with an asphalt company (they build roads and stuff like that) and he said that once a guy with really good qualifications came in for an interview as a lab tech and said “you can go ahead and fire all your other techs because I’m the only one you’re gonna need.” The interview lasted 5 seconds before my dad told him to fuck off.

For a while, I did “secondary” interviews to help out a new store. They’d do the recruiting for candidates and pass on to me the ones they liked best. I’d get some okay results but ONE supervisor had no idea how to shut down a candidate that wasn’t suitable. I coached her over and over but she had too soft of a heart (I miss when I had one, pre-retail).

This meant I got all kinds of characters. The worst: a candidate who laughed at me. He didn’t have an answer for my first two questions then just LAUGHED at my third and shook his head.

I shut down the interview and made it clear it was due to an inability to complete it. I politely asked if he had any questions and he said “is the job paid by direct deposit or a check? Do you need a void check from me?”

No sir, you’re never getting a pay check from us… EVER!

When I worked in a bank as a manager, one internal candidate I interviewed put her finger in front of my face while I was talking and said” I’m gonna stop you right there.”

I went with the other person who didn’t put their finger to my face.

3. This is all a bit unfortunate.

I was interviewing someone who had previously worked at the American embassy in his home country. The language barrier was very difficult and he was having a tough time with the interview. Part way through, he showed me some certificates he received from the embassy job, as awards for good work. The conversation then went like this:

Me: Can you tell me the story about some of these awards?

Me: I’d like to know why you received these awards. Maybe you can pick one of them and tell me the story about how you got it.

Me: Yes, these things you’re showing me right now. Tell me about them.

Him: They are awards.

Me: Right. Tell me how you received them.

Me: Yes. What did you do to get them?

That last bit was the longest sentence he spoke to me during the entire interview.

2. Then what are you doing here, sir?

Been doing a bunch of interviews lately for an intermediate network engineer. I had a guy start off an interview with “I don’t really know anything about networking”

1. I mean maybe he would have worked it out.

I was once around when my old boss interviewed a potential bouncer candidate. This guy lived about 45min drive away from the location, had no licence to drive nor a car. And no, there were no busses or other method of transportation available around the time the club closed.

When asked if he had a friend or some other accommodation figured out, he simply told that he’s going to pick up some girl every work night and spend the night at her place. Because hey, isn’t there always a line of chicks just waiting to bang the bouncer, right?

Just some notes to take for the next time you’re interviewing for a job.

If you’re a hiring manager (or have ever done something stupid while interviewing) tell us some stories in the comments!