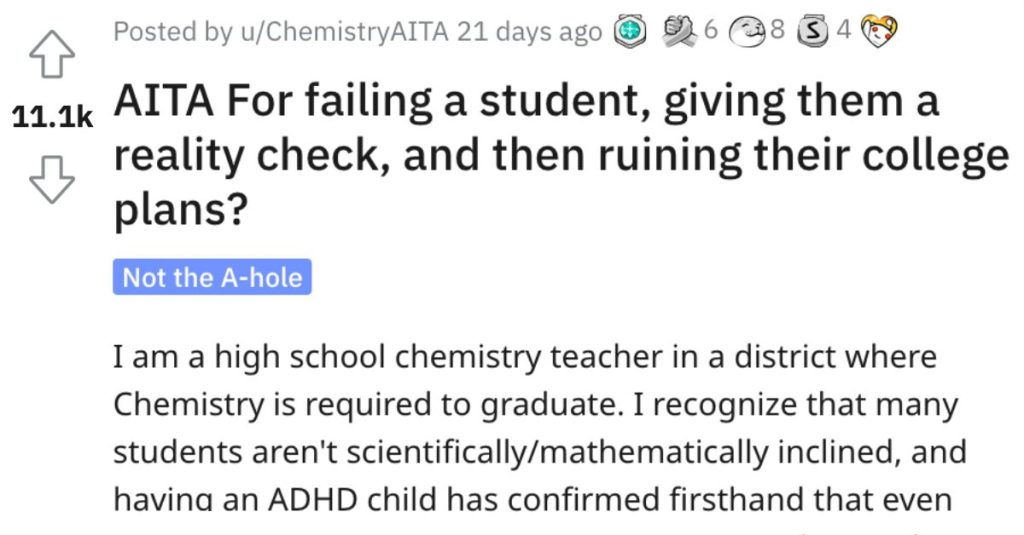 They Failed a Student and Ruined Their College Plans. Were They Wrong?

I don’t think I could ever be a teacher because I’d feel guilty if I had to fail kids and make them repeat a grade, etc.

But those folks gotta do their jobs, right?

You bet they do!

But they still have feelings, too, you know…

See if you think this teacher was an a**hole for failing a student and messing up their plans for college.

AITA for failing a student, giving them a reality check, and then ruining their college plans?

“I am a high school chemistry teacher in a district where Chemistry is required to graduate.

I recognize that many students aren’t scientifically/mathematically inclined, and having an ADHD child has confirmed firsthand that even trying your best may not guarantee “success” in certain subjects.

For this reason, I make my class as stress-free for my students as possible. Grades are determined mainly by homework/participation. Only a small percentage is exam-based.

I also offer a weekly extra-credit assignment that I introduce on Monday and have due by Friday. It’s the same every time; Watch a five-minute-long video about our current topic, then write a “3-2-1” about it. (3 things they learned, 2 things that they found surprising/interesting, and 1 question they still had about the video.) I even accept silly answers like “Where did the guy buy that mole plushie from?”

Even if you perform poorly on exams, turning in your homework and completing at least half the extra credit assignments will guarantee you at least a B. The majority of my students have A’s, are motivated during class, and their standardized testing stores indicate a strong understanding of Chemistry.

Then there’s my student, Levi. I don’t think Levi is a bad kid in any way. But he is very disrespectful and never turns in homework or extra credit. I have sent Levi to a counselor to discuss if there’s a reason he can’t do his homework and if we could help. Nothing came of that.

I held multiple parent meetings to discuss Levi’s lack of effort and that he would not graduate 11th grade unless he changed. His mother would insist that I give Levi another chance, and she would stay on top of him. There was never any improvement.

The last day of school is on Friday. Levi has a 34.6% in my class. He approached me last week after school and asked how he could raise his grade. I encouraged him to study for the final exam. But the exam is only 3% of his final grade and wouldn’t be enough. Because he failed both semesters, he doesn’t have the option to make up a semester in summer school and will have to repeat the 11th grade.

Levi begged me because he and his friends were planning to attend the same college and if he were held back he’d be left behind. I told him “Levi, your conduct and lack of effort will not work in college or the real, adult world. You are not ready for the complete adulthood that comes with college. Your grade is the one you earned and that is final.”

Levi looked devastated and left. Later his mother emailed me saying she wished I’d “invested more in Levi.” I h**e having to fail a student but I feel Levi needed a harsh reality check and he gave me no choice. It would also be unfair to my students who did try.

I talked about this with some family members, and many told me I could have taught Levi a lesson without “ruining” his future and I went too far with my words. Again, I didn’t enjoy it but still believe it was necessary.

This reader said this teacher is NTA and they made a good point about this student. 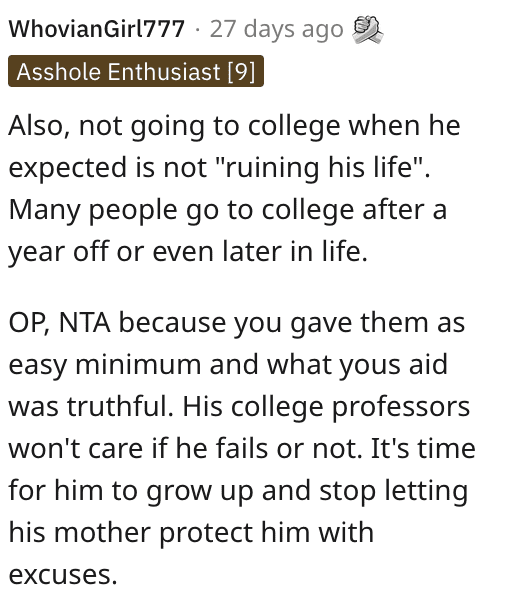 Another individual agreed and made a good point about the multiple meetings the teacher had with the student’s mother and counselor. 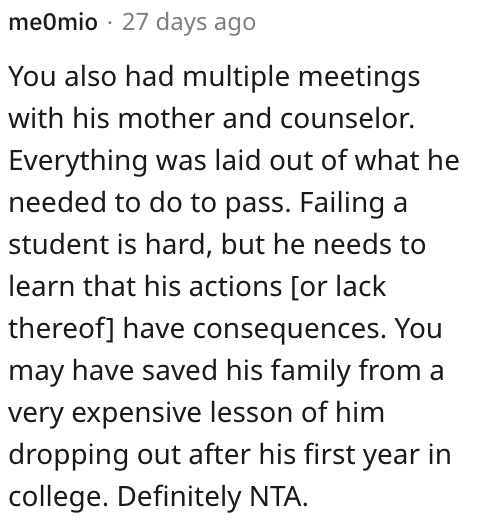 And this Reddit user had a hot take on the whole situation. 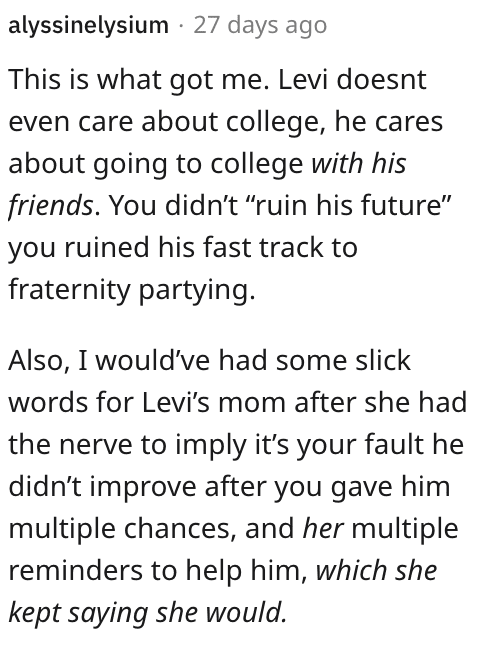