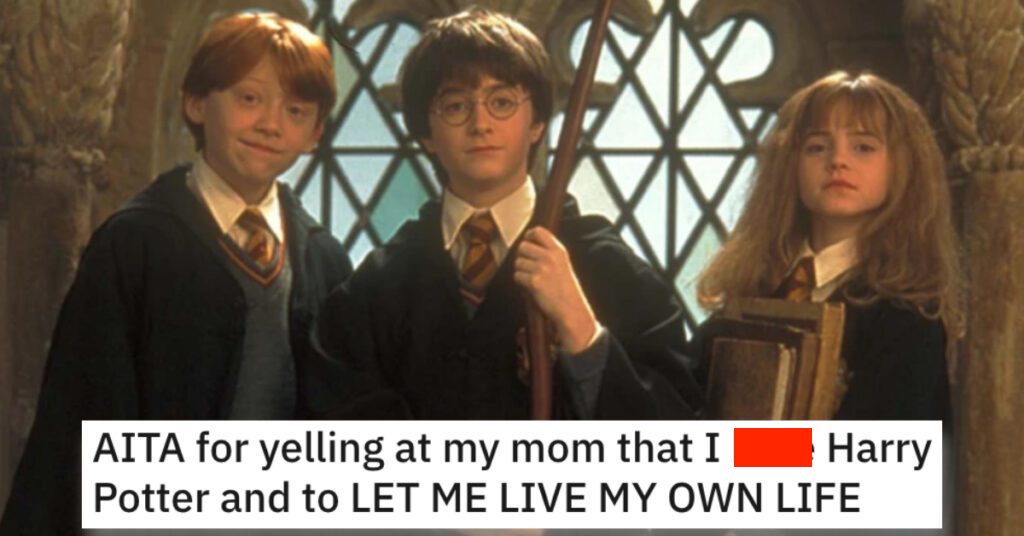 They Told Their Mom How They Really Feel About “Harry Potter” Movies. Did They Go Too Far?

It kind of drives me nuts when parents project their fandom for something onto their kids.

Did they ever think that maybe their kids just aren’t into the things that they are…?

Read this story from the “Am I the A**hole?” page on Reddit and let us know if you think this person was an a**hole to their mom.

AITA for yelling at my mom that I h**e Harry Potter and to LET ME LIVE MY OWN LIFE?

“As my title suggests, my mom is a huge Harry Potter nut.

She and my dad actually met in a harry potter “IRC” (like Disord but for old people) in the early 00s got married had kids and from day one decided to embarrass us for life by naming us after some Harry Potter and Star Wars characters.

It’s honestly been hell. I have a stupid name and since we were little my parents have forced stuff like Harry Potter, Star Wars, marvel movies, etc etc down our throats. Everything is about dragons and magic and blah blah blah. I’m so sick of it. Every birthday every holiday everything is just organized around “fandom.”

So just like every Christmas the days leading up to Christmas we have to sit down every night and watch Harry Potter movies. It’s. So. F**king. BORING!!!! I can usually get away with knitting or drawing on my Ipad during this but this year my mom was like “let’s just have a technology and distraction free night every night”

I arranged to go over to my friend Missy’s house instead for like two nights. Missy’s family is NORMAL and likes things a NORMAL amount. My mom got really mad and started talking about how it’s a family tradition and how I’m basically rejecting her and went on her whole thing about how “you wouldn’t exist if it wasn’t for harry potter.”

I finally had it and just yelled “NOBODY CARES THAT YOU WERE A BIG NAME IN THE HARRY POTTER FAN CLUB!!! I don’t like Harry Potter! I don’t like Star Wars! I H**E MARVEL MOVIES THEY’RE ALL SO BORING PLEASE JUST LET ME HAVE MY OWN INTERESTS!”

I couldn’t help it I started crying because I was just so frustrated because everything always has to be about harry potter this star wars that and now that we’re all older they started doing game of thrones. EVERYTHING is centered around some kind of movie or tv show or book series.

Just once I want my family to band around something that DOESN’T have to do with media or these nerdy things. We live in Utah where we have like 5 National Parks and even though I ask every year for my birthday I’VE NEVER EVEN BEEN TO ARCHES!!!!

Well my sister called me saying that mom was angry and to just come home and to stop with the theatrics. I told her that I’m sick of having all this old “nerd” stuff crammed down my throat and just once I want to have a normal time watching normal Christmas movies and not having to pause for “light saber battles”.”

One reader said this person is NTA and that they’re allowed to have their own interests. 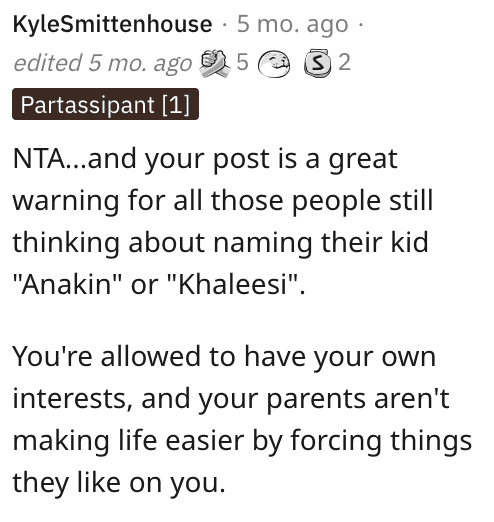 And this individual had thoughts about these kinds of names… 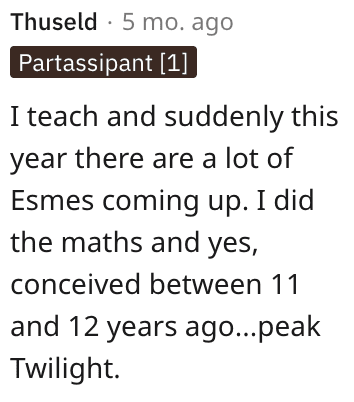 This Redditor said they’re NTA and that they feel sorry for her. 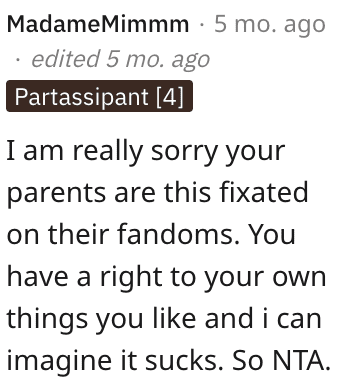