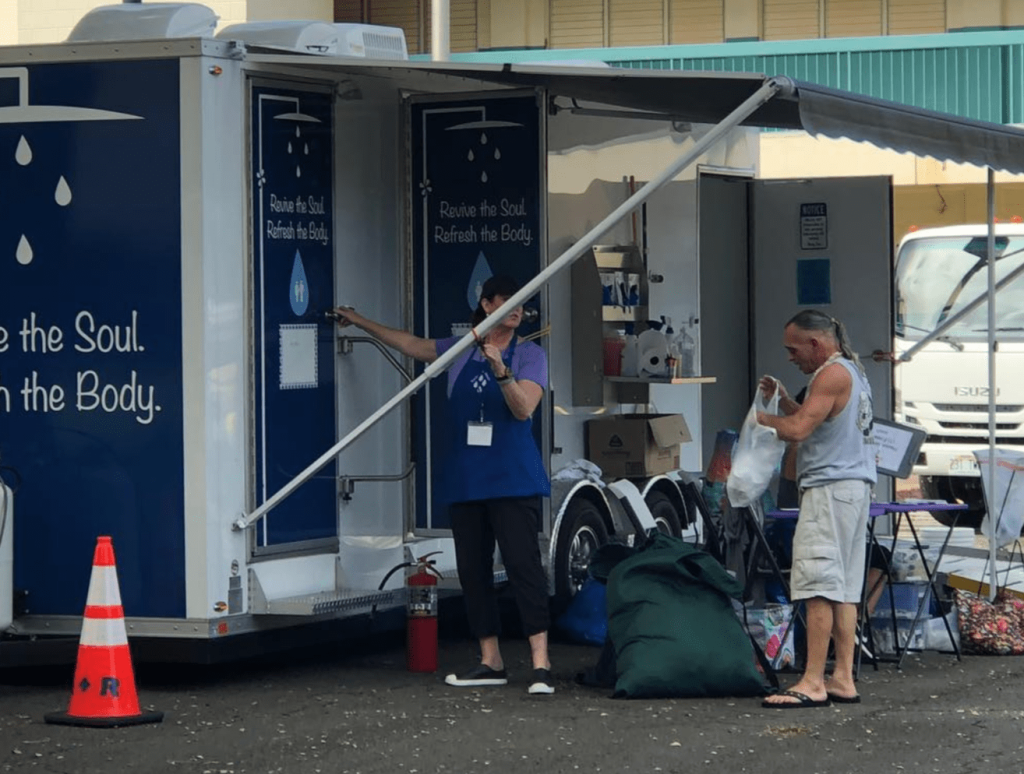 This Couple Invented a Mobile Shower Service for the Homeless

You may think it could never happen to you, but the reality is none of us are as secure as we think. An unfortunate series of events might unexpectedly occur one day that left you homeless. In fact, a lot of people are only one medical disaster or one unlucky break at work from being evicted or forced onto the streets.

Craig and Danica Shoji are a couple who are trying to do their part to help out Honolulu, Hawaii’s homeless population by making them “feel like humans again.” How are they doing it? They created mobile showers so homeless folks can get clean and feel better about themselves.

This may not seem like a big deal to those of us who live in apartments or houses, but to someone who is out on the streets every single day, it can be a huge gift.

Revive + Refresh 21 showered today at the hot sunny Aloha Stadium!!! We are honored to be a part of this amazing event!!! Got to meet some old friends!!! It was a such a blessing to be able to serve along side with everyone! ?? Kindness Matters

Craig Shoji first had the idea to help the homeless when he was in San Francisco in 2015. He said “good morning” to a homeless man and the person was surprised and touched by the encounter because he said that no one ever spoke to him on the street. The Shojis decided then that they would do what they could to “just treat people like normal people.”

Revive + Refresh Our very 1st event partnering with Harbor Church Hawaii for their monthly breakfast community service! We had 9 of their guests showered! ❤️

They began by creating Laundry Love, which provided clean clothes to homeless men and women. That eventually grew into Revive + Refresh which provides people on the streets with mobile showers as well as hot meals.

The Shojis have a trailer with two showers and they take it to events around Honolulu. People are allowed 15 minutes in the shower stalls, which are stocked with supplies. Homeless people are also invited to eat hot meals after their showers.

Craig Shoji said, “It’s amazing what a simple shower and a hot meal can do to uplift someone’s spirits, boost their confidence, and rekindle their motivation to keep fighting the good fight.”

Some photos of Revive +Refresh trailer on the production line.

This is an incredible idea from two people who are clearly living their best lives. Great job!