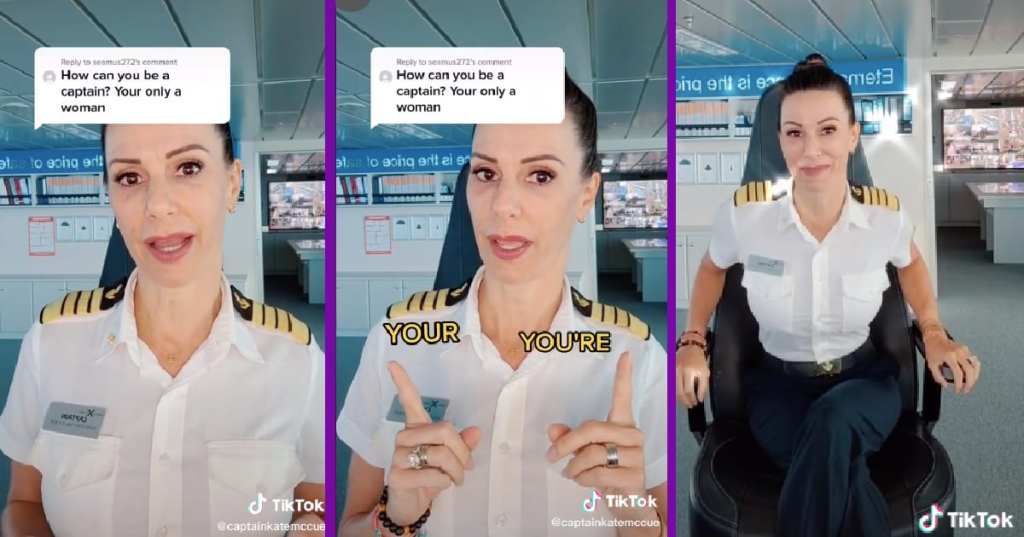 Now, I’m woman enough to examine the misogyny I’ve internalized myself and realize that yes, in my mind, I’ve been imagining cruise ship captains – and maybe all captains of sea-going vessels – as male.

That said, of course it makes sense that women can and do take the helm of ships large and small, and no matter my own faults, I would never publicly question a woman’s rank when she told me she was, indeed, a captain.

Not like this fool, who got put in his place, and based on everything I know about him, had better stay there and think about his life choices.

BRILLIANT. Did not expect that… 🏆👑❤️ pic.twitter.com/cx4dJBNmTY

Captain Kate McCue is the captain of the Celebrity Edge, one of Celebrity Cruise’s fleet. It’s a “mega” cruise ship, which means she has spent years rising through the ranks of an extremely competitive industry to get where she is today.

Yet, she still gets comments like this one online:

This is the best: handling ignorance with not only confident class but a well-placed grammar lesson to boot. She totally deserves the Captain’s chair 💯

How can you be a captain? Your only a woman.”

Well, let me tell you, you don’t have to get angry at the man who sent her this question, because Captain McCue has already murdered him with her clapback on TikTok.

She says that she normally ignores comments like those, but that in this day and age, in the year of our Lord 2020, she can’t believe that someone “still doesn’t know the difference between ‘your’ and ‘you’re.'”

She gives a quick breakdown, one that will no doubt be quoted and used by women everywhere for years to come.

For reference, “‘you’re’, as in ‘you are,’ like ‘you are sexist.” And “‘Your is something possessive, because it belongs to you, like ‘your ignorance.'”

Not only did this make my day, I’m quite sure it’s made my year. Captain – YOU’RE amazing. Thank you for sharing YOUR awesomeness!! Stay Safe. Be Well.

Just in case anyone has any further questions, she says you can find her “in her captain’s chair.”

I could not love this woman more, but I doubt the man in question isn’t going to have any followups. Since he’s been slain and all.