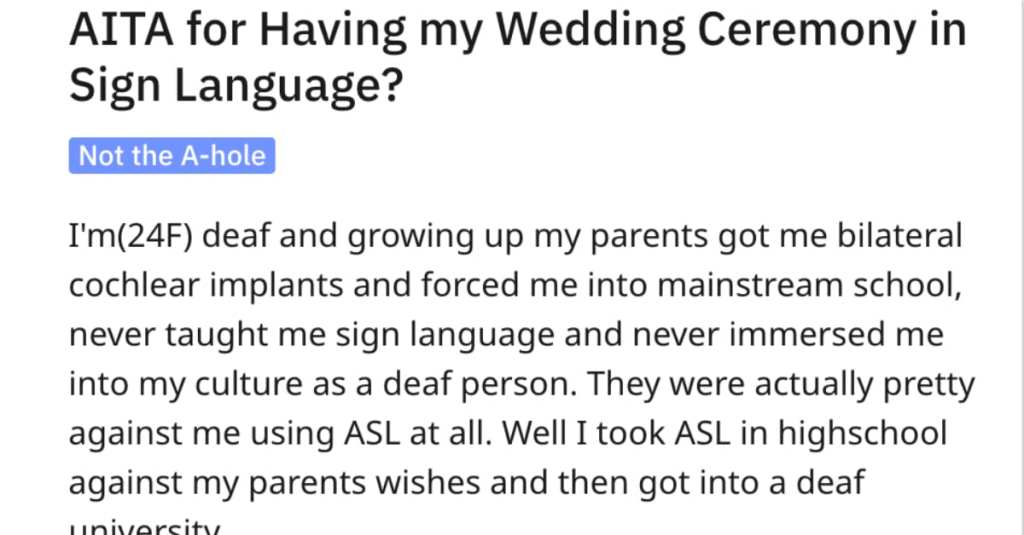 This Deaf Woman’s Family Made Her Feel Badly for Holding Her Wedding in Sign Language. Was She Wrong?

I think we all agree, straight away, that weddings make people act crazy. Sometimes it’s the bride and groom, sometimes it’s family or even friends who feel entitled to not only be included in, but have some say in, how the day goes down.

This family, though, man. They really take the cake and I honestly hope this woman and her husband keep their involvement in her life at a minimum until the day comes (if it ever does) when they can realize their wrongs and the pain they have caused their own child.

Some background, which is that she was born hearing impaired but her parents never considered offering her the deaf community as an option, forcing her to wear implants and attend a mainstream school.

They didn’t want her to learn ASL, either, but she did and chose to attend a deaf college and continue to sign.

I’m(24F) deaf and growing up my parents got me bilateral cochlear implants and forced me into mainstream school, never taught me sign language and never immersed me into my culture as a deaf person. They were actually pretty against me using ASL at all. Well I took ASL in high school against my parents wishes and then got into a deaf university.

Although I couldn’t sign fluently when I started, I finally felt accepted and understood, the deaf community was nothing but welcoming. I became fluent in ASL after a few months and stopped wearing my processors completely as there was no need for them any more. I honestly didn’t realize how alone I had felt until I didn’t feel that way anymore.

She met her fiance there, who is from a large, supportive deaf family. Now that they’re engaged and planning their wedding, they’ve realized that there will be more guests there who communicate by sign than who are hearing.

I also met my fiance at college, he is from a very large family of deaf people. Everyone he knows even in his far extended family is deaf, HOH, CODA or SODA and everyone is fluent in sign. I love his family so much.

We’ve been together for 4 years now, he proposed last may. We’ve been planning the wedding and decided to have it fully in ASL, the pastor at our churches deaf program agreed to do the ceremony. My extended family of hearing people is very small, just my mom, my dad, my sister, my brothers, my aunt, my uncle and my cousin(my cousin is learning sign).

Whereas my fiancé’s huge extended family who are all deaf or sign fluently will be there and most of our friends are deaf or know sign.

Since the invitations have gone out announcing the ceremony will be in ASL, her mother has pitched one fit after another about having to listen to the wedding through an interpreter.

Her comments have been insensitive and full of the same lack of understanding that seems to have colored OP’s entire life.

We decided to get an interpreter for the hearing people though so they’d know what was going on. Our wedding is in August so we just sent the invites. The invite mentions that it will be in ASL but will have an interpreter for those who are “Signing impaired” which is kinda just a joke.

But my mom started texting me and tried to convince me that it should be in English and have an ASL interpreter. I feel like it’s our wedding so we should have it in our first language but my mom thinks that we are in America so english should be the first language and anyone who doesn’t choose to “get cured”(Get an implant) should get an interpreter.

She also said it was disrespectful to say “Signing impaired” I don’t think she realizes the irony as she always refers to me as hearing impaired. During the entire conversation she kept repeating that ‘I should have never let you go to that school.’

OP is thinking maybe she should just cave to make her mother happy, but should she?

My mom also says that the deaf people should be used to having interpreters whereas she’s never had one before so it will make it harder to understand. AITA here? Should I just have the ceremony in english because I guess that’s the more normal way of communication even though we consider sign our primary language?

There are some reasons she’s not ready to cut her family off at this point, like she’s helping advocate for her younger brother, whose needs are also being ignored by their parents.

To clarify some things…

I say yikes, but what do the good people of Reddit think? Let’s find out!

It’s sad, but it sounds like her mother really has never accepted her for who she is. 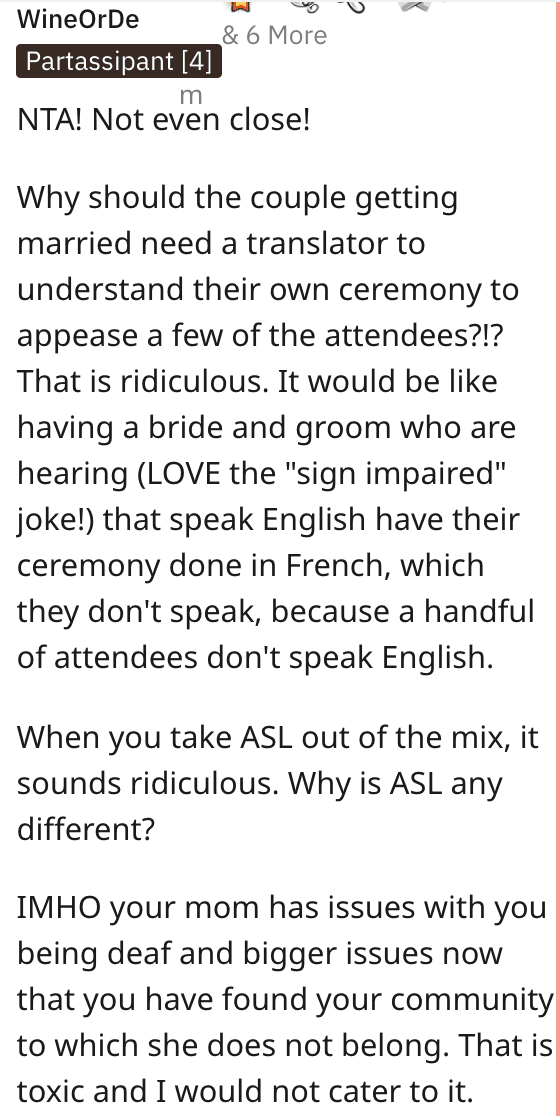 There are tons of people pointing out, with emphasis, that this woman is in no way the a$$hole.

Mom is not logical, but that doesn’t mean we have to cater to her. 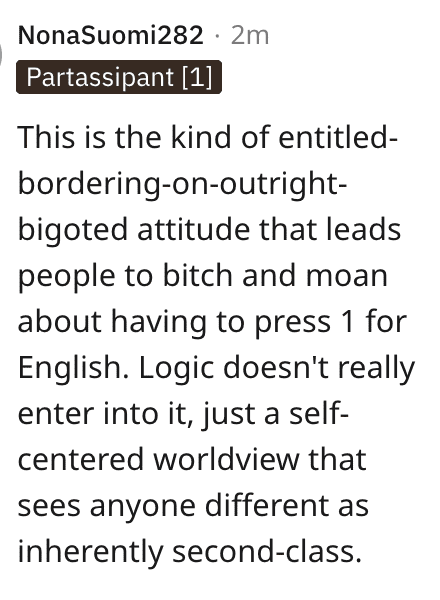 Childish is one word for it, and about the nicest one I can think of. 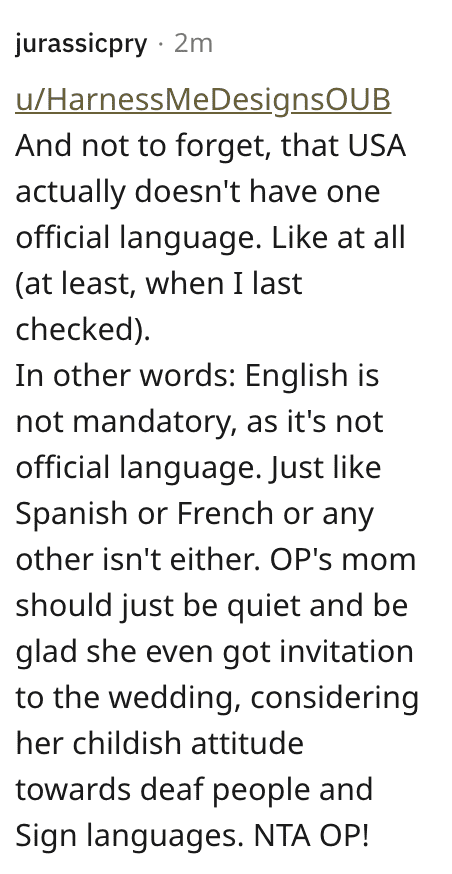 Options are one thing. Only providing one is kind of the opposite. 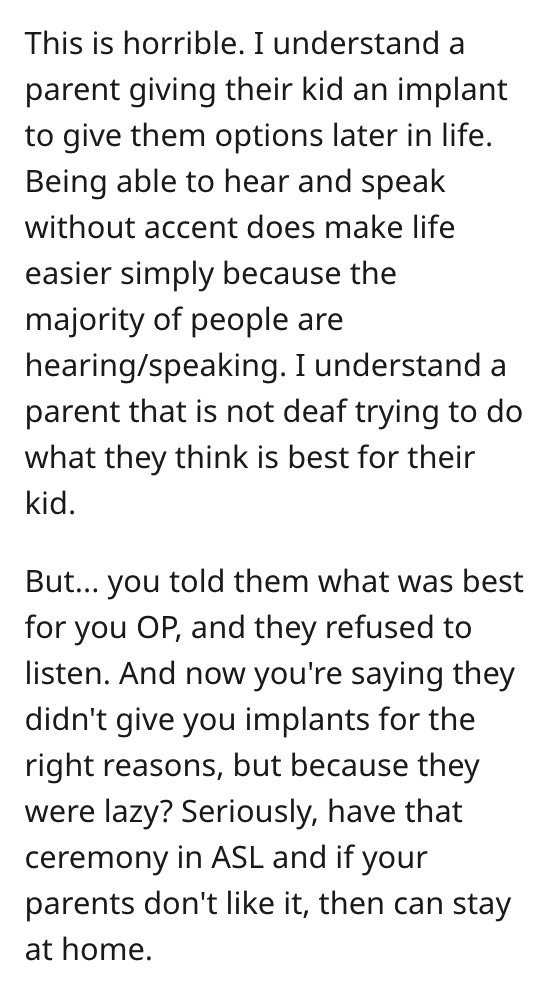 Yeah, this mother is terrible and needs some therapy and to take some serious, hard looks at her choices.

How angry are you? Let’s compare our rage in the comments!