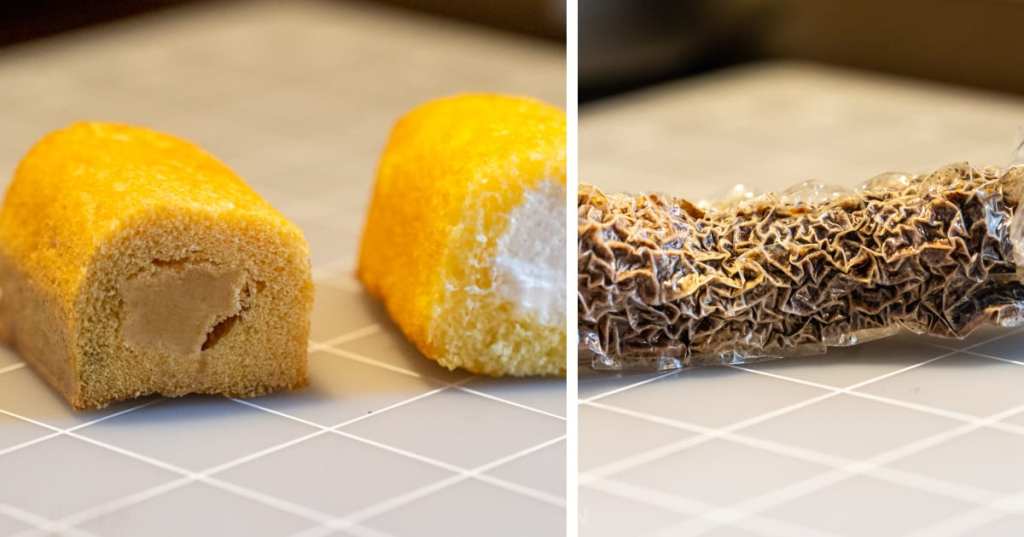 Listen, I know that we all assume Twinkies would be one of the of the foods to survive a nuclear holocaust, but if you find one in the corner of your basement, and you’re not exactly sure how long it’s been there (or even when you last bought Twinkies), you might not want to eat it.

Unless, like this guy, you want to find yourself on the cutting edge of science. 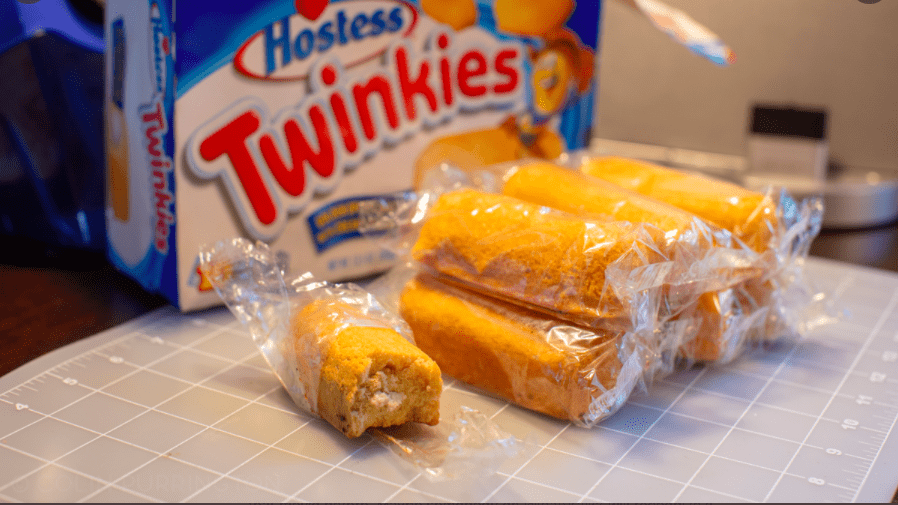 Urban legend maintains that Twinkies will likely be what gets some of us through the apocalypse.

They’re said to stay good in their little packages for like, 50 years or longer, but wildlife photographer and science enthusiast Colin Purrington had only has his stash since 2012 before cracking it open in this most unusual year.

I found a box of @Hostess_Snacks Twinkies from 2012 in my basement and I thought I'd make a short thread. There were some surprises. pic.twitter.com/Qfa9oAKQR7

He was one of those, like the writers of Zombieland who believed Twinkies might be on the verge of disappearing forever.

2. The Twinkie from 2012 is on the left. It seems to have settled a bit over the years and looked dry. The biggest difference is that the cream filling has browned and constricted a bit, leaving air gaps. pic.twitter.com/qxGb0Xd3fH

Purrington’s Twinkies were only 8 years old, but they made him gag all the same. That could be that, urban legend aside, the cake is really only guaranteed for around 45 days.

3. Although I grew up thinking Twinkies would last for years, if not forever, I was wrong. The one I bit into was chewy, unsweet, and smelled like rotting ginkgo fruit. I gagged. I have nobody to blame but myself — the box clearly warned, “Best Used by Nov 26th” (2012). pic.twitter.com/jhYM5yiEDS

The other Twinkies in the box seemed to be “hosting an organism of some sort,” and that’s where things started to go from gross to something else entirely.

4. I didn’t try this Twinkie because it’s hosting an organism of some sort. I guess it could be dead but that’s not something I’m going to risk. I’ve seen that movie before. Maybe somebody on @inaturalist will recognize it. Here’s link in case that’s you: https://t.co/cUZLymvPBV.

One of the Twinkies, though, looked nothing like the product he started with. Ew.

5. I promised there was a surprise and this is it: one of the Twinkies had shriveled into a small log, sucking in the plastic like it was vacuum-packed. Is that something a fungus or bacteria does, or is there some abiotic chain-reaction taking place? pic.twitter.com/BuJZb8hFng

Let’s take a closer look, shall we?

8. More views of the 8-year old Twinkie, some of which seem to show fungal hyphae. I also noticed several globs of yellow on the exterior of the wrapper (e.g., bottom right pic) that I assume are from holes. Maybe it’s one of those fungi that can eat plastic. pic.twitter.com/0ejkwt9B6p

He appealed to scientists reading his Twitter thread to pick up where he left off, and actually identify what fungus was devouring his formerly delicious treats.

9. Infected Twinkies are on their way to @kasson_wvu and @lovettbr. For the culture, of course. Stay tuned. pic.twitter.com/uSmloi2Scj

Matt Kasson, an associate professor of forest pathology & mycology at West Virginia University, bit. Colin sent him the Twinkies, he took a biopsy, and they started to learn what was growing inside that sealed package.

10. The Twinkies have arrived. Godspeed. https://t.co/ZrCVLHcDS5

His team concluded that the fungus was already inside the package when it was sealed.

As for the look of it, Kasson’s colleague Brian Lovett had an idea about that, too.

“You end up with a vacuum. And that vacuum may have halted the fungus’s ability to continue to grow. We just have the snapshot of what we were sent, but who knows if this process occurred five years ago and he just only noticed it now.”

13. I’ve updated my @inaturalist observations: both Twinkies were being eaten by something in the Cladosporium cladosporioides Species Complex. https://t.co/NwMtqmlMFD

They found fungal spores under the microscope, and from the lightly spotted Twinkie they were able to regrow new spores in a lab setting. It’s a common, airborne fungus called Cladosporium.

On the one that looks sort of like a mushroom, they found a fungus they couldn’t replicate, and one they haven’t yet been able to identify. It’s dead, or at least mostly dead, and has thus refused all efforts to resurrect it.

Where’s Miracle Max when you need him?

“The story is not over, of course. The fungus growing on the center Twinkie is apparently in the genus Cladosporium, but hopefully they will be able to determine the exact species. And I’m hoping that if they can’t culture the fungus in the mummified Twinkie that they’ll be able to sequence it to get an ID. I cannot wait.”

And in case you’re worried the fun is coming to an end, please don’t. Purrington teased, “They are also working on the moldy Ho Hos I sent them.”

11. Well, I had hoped my mom would never hear about all of the above, but she’s a huge @npratc fan. Story by @nell_sci_NPR. https://t.co/cjQMwUlqLC

We’re all just waiting on pins and needles to hear about fungus.