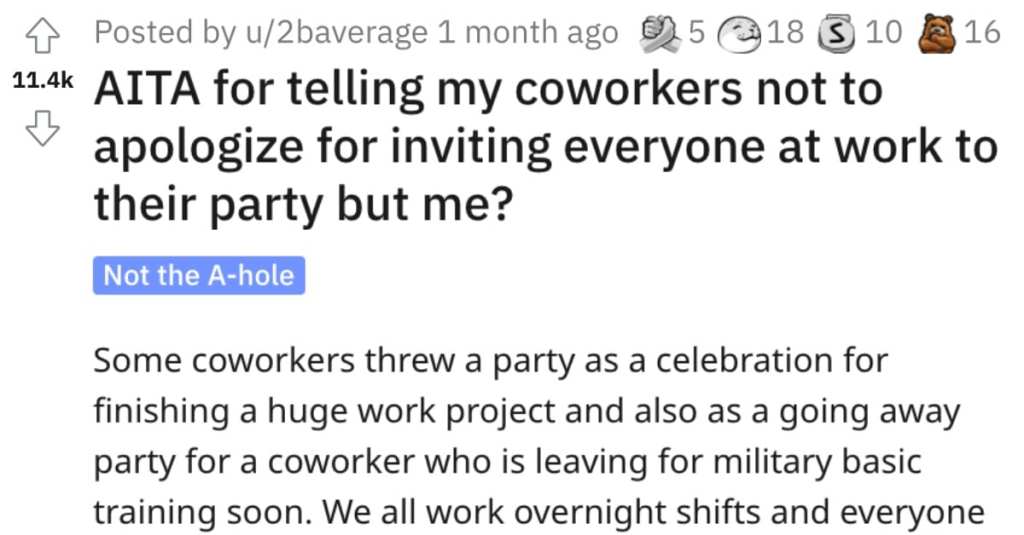 It sucks to not get invited to a party or an event…especially if it involves people you work with.

And a person shared their story on Reddit’s “Am I The A**hole?” about how they reacted when they learned they weren’t invited to a work party…let’s see what happened and if readers thought this person, in fact, acted like an a**hole.

AITA for telling my coworkers not to apologize for inviting everyone at work to their party but me?

“Some coworkers threw a party as a celebration for finishing a huge work project and also as a going away party for a coworker who is leaving for military basic training soon.

We all work overnight shifts and everyone was invited, and some people from the closing shift as well. The past few weeks I’ve heard everyone planning the event and I’ve put in my suggestions for the party when asked, but no one ever communicated to me the address and agreed upon time, and through the entire planning process I was never asked if I wanted to come or could make it nor was I counted in the number of planned party guests.

So the Monday after the party arrives and I get told by the manager at the ‘morning’ meeting that I was missed at the party and everyone wants to know why I didn’t go. I told them that no one invited or gave me the address and time so I just assumed when everyone’s invites were being texted out that I didn’t get one because no one is work friends with me.

So it became an awkward silence before a bunch of apologies and I told everyone not to apologize. I wasn’t mad, I wasn’t upset; I personally had a great weekend when the party took place and the last thing I want are apologies that aren’t meant (y’all didn’t invite me or check to make sure I knew for a reason and I’m fine with that. I know we’re not friends; I don’t say this in malice or any emotion but as fact, it’s 67° outside and we’re not outside of work friends)

So now I’m dealing with an awkward situation of half my coworkers calling me an asshole and the other half now going above and beyond to try and befriend me after almost 8 months of working together.

My manager is taking it the hardest and has been calling me into private meetings nearly every day about why I didn’t feel comfortable enough to ask for an invite or why I didn’t speak out and make sure I was invited to a party I was helping plan, because now I made everyone at work feel like assholes when this whole thing could have been avoided.

Now let’s check out the responses from Reddit users.

This reader said that this person is not a jerk in this situation and that the boss is actually the person who’s acting strange about the whole thing. 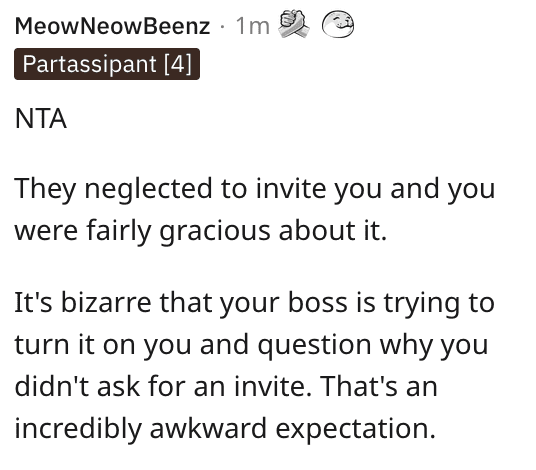 And this reader agreed that this whole situation is being turned around on the person who wrote the post…which is pretty weird. 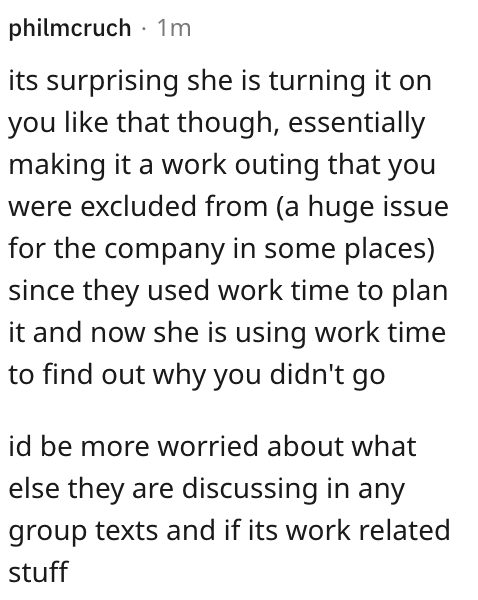 Another individual said that things might get even weirder if HR at the company finds out. 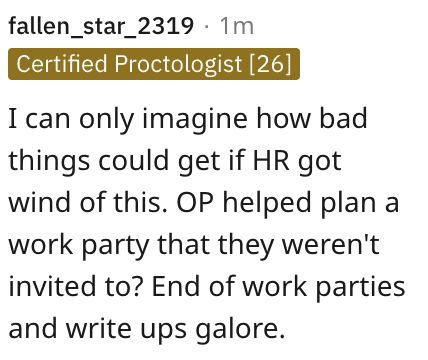 Finally, this reader said that the person should just tell their boss to let it go because it’s over and done with. 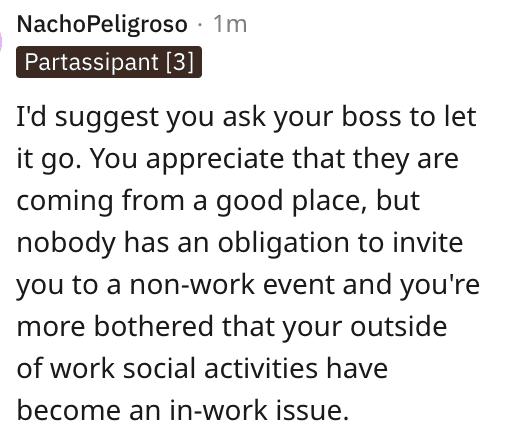 What do you think about how this person handled this situation?