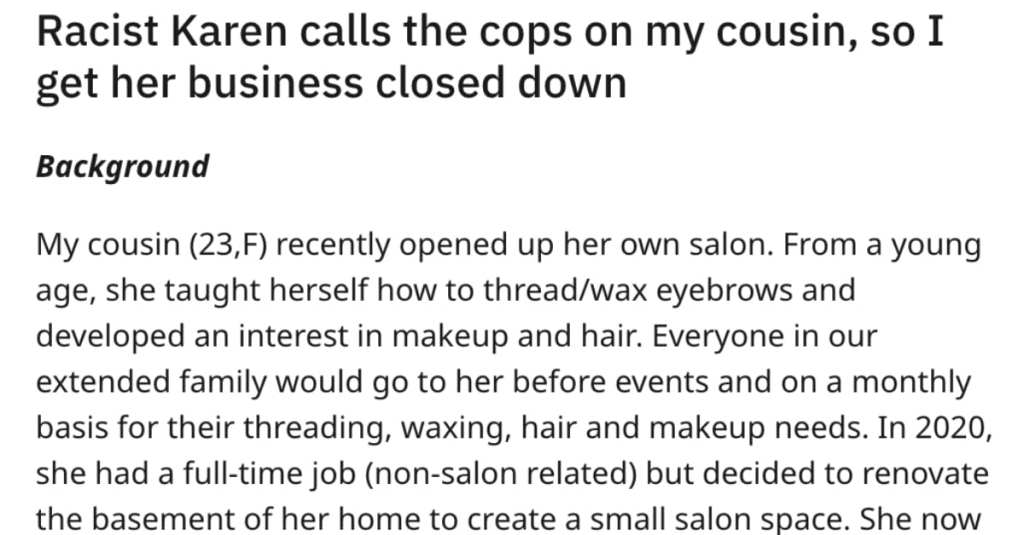 Racism is the topic at the forefront of the minds of many these days, and rightfully so. Everyone needs to have a plan for what they’re going to do if and when they find themself staring it in the face.

This person had to enact that plan after a racist “Karen” called the cops on her young cousin, and I have to say, I think she knocked it out of the park.

The cousin had always dreamed of starting a salon and managed to do just that, with family helping out in all kinds of roles and everyone taking ownership of the fledgling business.

My cousin (23,F) recently opened up her own salon. From a young age, she taught herself how to thread/wax eyebrows and developed an interest in makeup and hair. Everyone in our extended family would go to her before events and on a monthly basis for their threading, waxing, hair and makeup needs. In 2020, she had a full-time job (non-salon related) but decided to renovate the basement of her home to create a small salon space.

She now spends her free time taking clients in her at-home salon and there’s nothing but great reviews! Her sister helped with the renovations and now helps her with marketing the business (social media, community pages) and I help with the finances (budgeting, price-setting). We all support her and are really proud of her! The salon is our baby.

Covid took a toll on the business, like it has on most things, but they were managing to keep forging ahead with precautions.

We’re now in the middle of a pandemic and this greatly affected her salon business. As a result, she implemented safety measures and our small team made sure to keep up with covid regulations in our city. This included having one customer inside at a time, doing temperature checks, making masks/face shields and gloves mandatory, wiping down the salon after each client…etc. Also, when our city was in lockdown, the salon was closed as it is not an essential service.

Once their city went into lockdown the salon was forced to close temporarily, making sure clients knew through Facebook, etc.

There was a comment on an old post offering a deal, from when the salon was allowed to be open with precautions, that she couldn’t believe her salon had to be closed and this one didn’t – but no one saw it right away.

Our city is once again in lockdown since the end of December to the end of January. The salon has been closed since the lockdown began. The salon’s social media pages had been updated to let the current clientele know that the salon is closed.

Now comes the Karen. Karen sees a community post from OCTOBER detailing a discount that the salon was having on a certain package we offer. She comments on the post saying that she can’t believe the salon is open in the middle of a lockdown when her salon has to be closed. This is important for later. Karen fails to notice that this post was made in October, when salons were allowed to operate as long as they followed safety regulations.

Karen doesn’t bother checking more recent posts indicating that the salon was closed. My cousin doesn’t see her reply at this time.

Then, the police showed up, wanting to see the cousin.

She wasn’t home and so she missed them (twice) but they left a card and asked her to call them back.

The next day, two police officers show up at my cousin’s door while she’s at a doctor’s appointment. The officers ask for my cousin and my aunt lets them know that she’s not home right now. My aunt does not speak English very well and lets the officers know that she would call my cousin and ask her to come home. Maybe the officers didn’t believe her but they insisted on coming inside the home.

My aunt had already called my cousin as she was worried. My cousin asked what it was about, but my aunt didn’t know. My cousin then asked if they had a warrant for anything. When she found out they didn’t, she told her mom not to let them come inside and that she would be there in about 20 minutes. My cousin began driving home when my aunt called her to let her know that they simply left. Hearing this my cousin was less worried and decided to go grocery shopping as planned before heading home.

When she did they informed her the business had been reported for operating during quarantine. She explained she hasn’t been seeing clients and has been following all of the rules, suggested that if they were getting their information from Facebook they should double check the dates on the posts, and figured that was the end of it.

My cousin managed to get a hold of the officers and was told that someone had reported her business. They claimed that she was operating during the lockdown and they had proof. My cousin knew this wasn’t true as the salon had been closed for quite a while.

By now, my cousin had seen the comment from earlier and mentioned that she knew exactly what their so called proof was but the post in question was from October. My cousin was very upset as this post was not even close to being actual evidence of her operating now, in January. She was also very upset that they insisted on coming inside the house with no cause or warrant when they could clearly see that my aunt does not understand the language very well.

At the end of the conversation, the police officer apologized to my cousin and we thought it was the end of it.

Then, the Karen who made the comment called, pretending to be a customer.

You must be wondering how we know that Karen was the one who called the cops. Well, she told us! The next day, my cousin received a message she realized was from the woman who commented on the post. Karen decided to pretend like she’s a customer.

Karen: Can I book an appointment?

My cousin: Hey love, we are currently closed due to the lockdown. Once the lockdown is over, we will be more than happy to book you in.

Karen: Oh my gf was there yesterday, my apologies

My cousin: You must have gotten the date wrong. The salon is not taking clients until the lockdown is over. Thank you.

Karen: Np but I didn’t get the date wrong lol I also know the police came due to you being open. Take care

My cousin: I’m not going to sit here and entertain your boring life. Maybe for a change you can find another hobby rather than spreading lies and wasting people’s time, including the police’s time. Or even better, find an actual job. Have a good night.

Karen: I own my own spa that’s closed as should yours be. My mom is the one who called the cops. You are not entertaining me at all. Go back to your own country instead of fucking with ours.

My cousin decided to block her at this point. My cousin was happy this was all over. Her sister and I were still outraged at the racist comment and how someone could make up lies about a small business that led to the cops terrifying my aunt. When my cousin told me about Karen, the fact that she had her own spa really stood out. I did some digging.

It turns out she made a mistake, though, because not everyone is willing to let comments like that go – as they shouldn’t.

urns out Karen runs her own spa out of her house. Doing some more snooping, I found reviews from her clients on her business page that were posted on days that the city was under lockdown. The reviews could be from clients who received services before the lockdown and only now had a chance to write a review. To be sure, I found Karen’s Instagram page.

I decided to use her own trick against her! I created a new account with a generic name and followed her page so she couldn’t see that I was related to my cousin. I then messaged her to ask about the prices for her services.

Me: Hey, I love your pics! I was wondering how much you charge.

Karen: Hey girl, thank you so much! What service are you after?

Me: I’m really interested in the BB glow facial.

Me: That’s such a great deal compared to others! When is your next available date?

Karen: Where are you located? I can’t have people come to me in lockdown but I travel to my clients.

Head’s up, going to people’s houses was still not allowed during their lockdown rules, so she totally told on herself.

And then OP told on her, because tit for tat.

aren was not operating from her home location due to lockdown restrictions but was traveling to her clients’ homes which is still against regulations! I then made up a lie about my home not having adequate space and asked for her address so we could meet up at my friend’s place somewhere between her and I’s locations. She foolishly told me her address.

During this time, I also tried joining other community groups that she was a part of. In one particular group, people in the community were promoting their small businesses. She had recently made a post about discounts on her services for the month of January! I immediately went online and submitted a report about her business still operating including screenshots, her address, full name…etc.

The police checked it out and fined her, and since it turned out to be a second (or perhaps third) offense the penalties were stiff, and her business was shut down.

She was angry, made threats, etc, but I mean…meddlesome racists get what they get, don’t you think?

A few days passed by and I had forgotten to check up on it as I was busy with life again. I saw the incident report number on a sticky note I had on my desk and decided to check in. Apparently, this was not Karen’s first offence! Karen had already been fined $750 for having a client in her home during the first lockdown in my city. After being fined, she decided to change her business model and go to the client’s home instead. Now, she was fined $10,000!

I was still following her on Instagram so I decided to check it out. She had gone on a rant about how she was going to do very bad things to the person who reported her. She also mentioned that she was no longer allowed to run her business! I’m not sure what type of ban the regional police put on her but I immediately deleted the account and exited the groups I had joined earlier. At the end of the day, Karen got was she deserved and I fulfilled my dream of pretending to be Sherlock Holmes.

Naturally, reddit had A LOT to say about this story. And all of it was supportive. 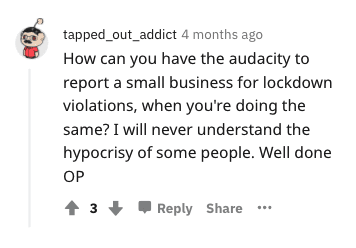 Because Racist Karens are gonna do what they do… 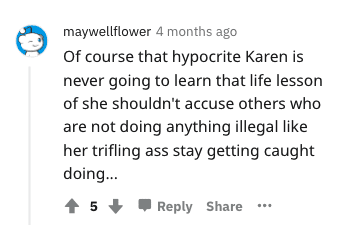 And some people really gave it to the cops. 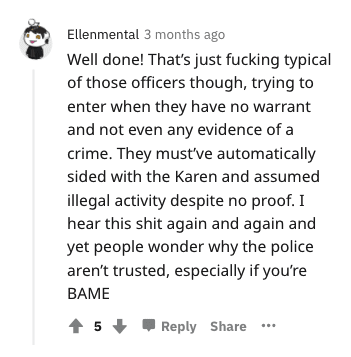 And hey, some business tips! 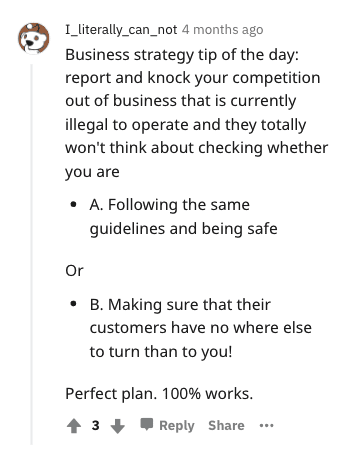 Did this person go too far? Should they have been a bit more understanding in the times of Covid, one small business owner to another?

Drop your thoughts on the matter down in the comments!