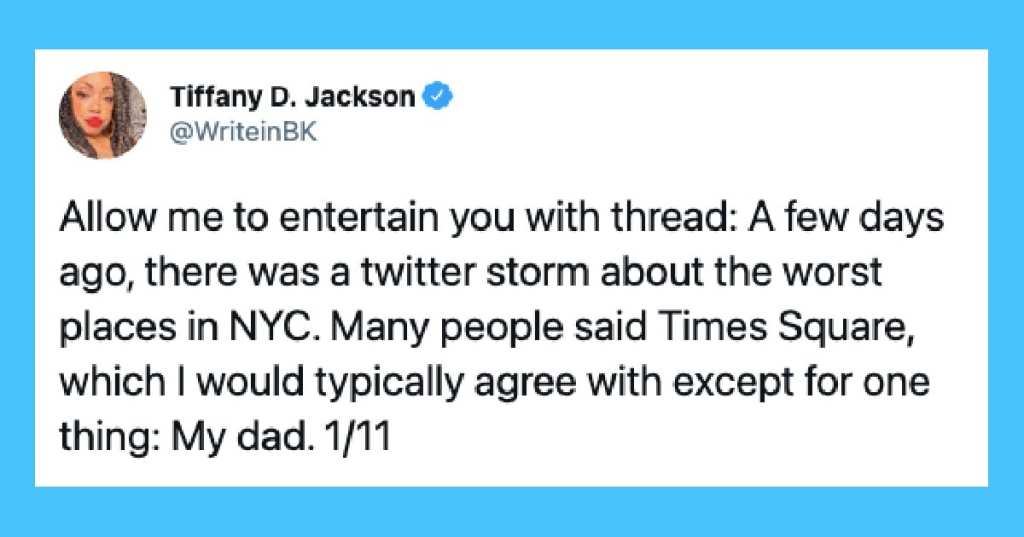 When we see a place or an event or a person enough, it can be easy to forget why we thought it was so special to begin with, don’t you think? And because Times Square is so bustling and full of tourists and smelly and sure, a little cliche now, there’s a good chance that the people who see it every day don’t take the chance to really appreciate it anymore.

If you love New York City, though, you’re going to adore this thread by author Tiffany D. Jackson about why the space means so much to her and her family.

It began with another thread, one that asked people about the “worst spots in NYC,” and one that many people responded to with “Times Square.”

Allow me to entertain you with thread: A few days ago, there was a twitter storm about the worst places in NYC. Many people said Times Square, which I would typically agree with except for one thing: My dad. 1/11

Her father has been a street vendor in the same spot – 45th and Broadway – for 23 years.

Some of you don’t know this but my dad is a street vendor in Times Square. He’s been at the same spot on 45th and Broadway for the last 23 years. (ie. he was there before MTV’s TRL madness). He has SEEN some thangs. 2/11 pic.twitter.com/gKgG8kHORi

Also? Her dad is the hero who found the Times Square bomb back in 2010.

It shouldn’t surprise anyone that the space has its fair share of unwritten rules (that Tiffany got to benefit from sometimes!).

Times Square has unwritten rules between the vendors, entertainers, police, and everyone in between. I know a lot of the ins and outs: where the clean bathrooms are, how to navigate through building, which hotdog stands are legit, & been backstage of most Broadway theatres 4/11

She basically grew up there, making an impression on everyone who spent time with her and her father.

I kinda grew up there & the staples have seen me grow. Naked Cowboy sent me a card for my HS graduation. Some of the sketch artists came to my graduation party. Free bicycle taxi to job interviews. When I went to India, guy at the hotdog stand next to my dad gave me tips! 5/11

Her dad is one of those staples that absolutely everyone knows, especially Tiffany’s friends.

Time Square folks have come and go, but my dad is a staple. Everyone knows him. Whenever any of my friends or old co-workers are near Times Square, they all walk by and say “Hi Tiffany’s Dad!” (My dad always tells me so and so stopped by) 6/11

He, like everyone else in the service industry, has struggled to keep going during covid. Recently, though, she went to visit him.

Fast-forward to today: Summer and Holiday seasons are the busiest time in TS but thanks to Corona, everyone has taken a beating, including my dad. He hasn’t been working since March. The longest he’s been away and he’s slowly making his way back.

New York is very strangely quiet, and despite the crabbing people do when it’s normal, everyone who spends time there kind of wishes it would go back to being crazy.

Times Square is SUPER eerie with all the plays & stores closed and zero tourists. My dad set up his stand anyways. He’s a people person, likes being in the center of everything.

But it’s a STRANGE ghost town and it might be time to move spots. 8/11

Of course, the staples are still there and doing their best to keep everyone entertained.

Naked Cowboy is also out there, still inappropriate as ever. They’re keeping themselves entertained. 😜 9/11 pic.twitter.com/h5gZNJ8Tci

She just wants everyone to remember that even though Times Square is all of those things New Yorkers hate, it’s also full of some of the MOST New York people there are, and that they’re still out there every day trying to make a living.

All this to say: Time Square is def a tourist hell trap, but it’s also a microcosm of the very hustlers that make New York NEW YORK! A lot of them have lost their livelihood but some are still out there…selling whatever they got and keeping this city…unique. 10/11 pic.twitter.com/2XxzdfY2h9

Her dad also sells her books (allegedly), so stop by and say hello when you’re able.

SN: My dad is also an unofficial bookseller and has been known to sell signed copies of my books from the back of his truck. (Allegedly. *smirks and winks*)

If you stop by, tell him I sent you.

Tiffany is a lovely writer – I’ve read her book, Allegedly (and now you get the joke), and I can’t wait to pick up one of her newer titles in the near future.

What odd things makes New York City special to you? Tell us in the comments so people can make lists of where to visit once they can move freely about among all of the other annoying humans again!