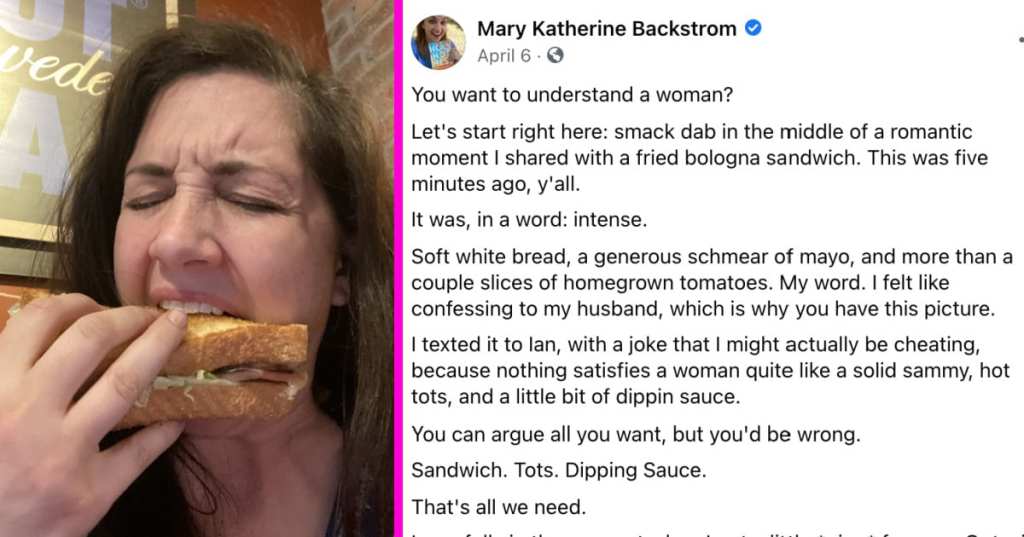 If you don’t realize how many ridiculous beauty standards there are that only apply to women, or haven’t noticed that the culture around beauty and women is incredibly harmful and toxic, I’m going to assume you’re an alien pod person or you just haven’t been paying attention for, oh, your entire life.

The women they put on television and in the movies and on runways and print in magazines tell us we shouldn’t love those things. We need to buy things to fix those things, in fact, and we’re left at odds – often with ourselves.

If you want to understand women’s struggle when it comes to stuff like this, you should be following blogger and author Mary Katherine Backstrom. She just has a lovingly blunt way of putting things that makes you feel like she gets it, and you, and this post about bologna sandwiches and tater tots is no exception.

And here’s the text.

You want to understand a woman?

Let’s start right here: smack dab in the middle of a romantic moment I shared with a fried bologna sandwich. This was five minutes ago, y’all.

It was, in a word: intense.

Soft white bread, a generous schmear of mayo, and more than a couple slices of homegrown tomatoes. My word. I felt like confessing to my husband, which is why you have this picture.

I texted it to Ian, with a joke that I might actually be cheating, because nothing satisfies a woman quite like a solid sammy, hot tots, and a little bit of dippin sauce.

You can argue all you want, but you’d be wrong.

That’s all we need.

I was fully in the moment when I got a little *ping* from my Optavia coach. She wanted to know how I was doing on the program. “The program” being a thing I signed up for a few months ago when couldn’t fit in my skinny jeans and was suddenly motivated to shed a few balogna sandwiches.

So, now I’m invested to the tune of hundreds of dollars, with two full boxes of powdered astronaut food sitting in my entry way closet because I don’t care how delicious a powder brownie mix is, NOTHING, and I mean NOTHING, competes with fried tots and dipping sauce.

Anyways, back to understanding a woman.

You need to understand:

I am fiercely committed to enjoying bologna sandwiches.

I am 100% committed to becoming the next Brooklyn Decker via overpriced crash diet space food.  

And I am ALSO anti-diet culture and will probably post a picture of myself weighing 200 pounds telling everyone on this page to LOVE THEMSELVES AS THEY ARE because, DAMMIT you are beautiful!

And you know what the crazy part is?

I am 100%, full-hearted, unabashedly all three opposing people at once.

The woman eating the bologna sandwich.

And the woman who signs up for random crash diets when I want to fit into a fashionable dress for a family wedding.

I want to love myself as I am.

I want to enjoy life without reservation.

And I want to be beautiful by society’s standards.

But I wouldn’t know. Because I look to the right and look to the left and all I see are things society thinks I should improve.

And it messes me up and confuses my brain and it drives me to space food and fried bologna sandwiches.

And that, my friends, is what it is to be a woman.

So what did the internet have to say?

A LOT of positive things. 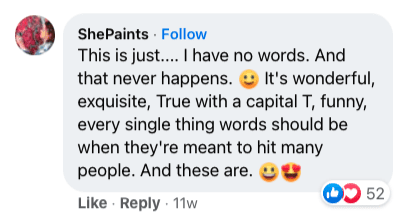 Because sometimes all you want is a sandwich. 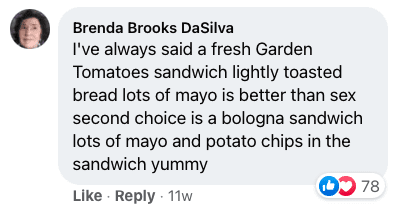 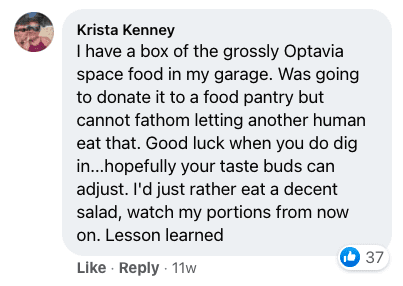 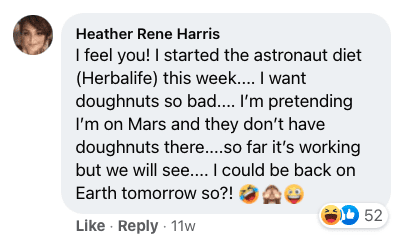 Ok, so maybe that doesn’t actually explain anything, but hey. We are what we are; love us or leave us.

We’re working on not really caring much either way.